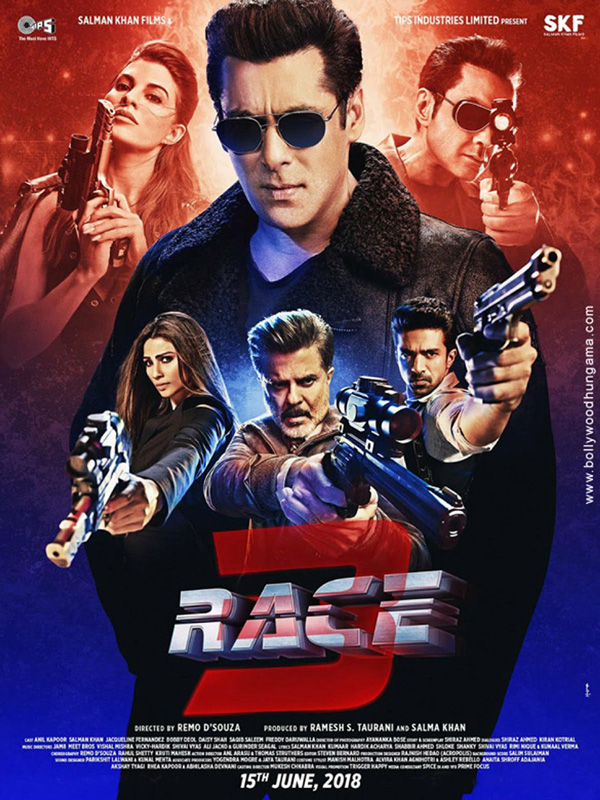 RACE 3 is the story of a dysfunctional family amidst a high stakes heist. Shamsher (Anil Kapoor) is the head of this family and Sikander (Salman Khan) is the kind-hearted and wise member. Sanjana (Daisy Shah) and Suraj (Saqib Saleem) are the youngest in the family and have a grudge against Sikander. But Shamsher is the pacifier who always ensures that things don’t go out of control. However, trouble arises when this family is entrusted with a task of retrieving a hard disk kept in a locker. This hard disk is worth millions. Shamsher entrusts this task to Sikander and the other family members. What happens next forms the rest of the film.
The biggest problem with RACE 3 is that there’s hardly any storyline in the film. Whatever of Shiraz Ahmed’s story is there is lame and confusing and it rests on a wafer thin plot. Shiraz Ahmed and Kiran Kotrial’s dialogues are corny and one soon realizes that Daisy Shah’s ‘none of your business’ is not the only troll-worthy one-liner of the film! Shiraz Ahmed’s screenplay is disjointed as it concentrates more on style and action than substance. Also, just like its predecessors, the makers have added a lot of twists and turns but they are unnecessary and unconvincing.
Remo Dsouza’s direction also suffers as a result of the flawed writing. The film is high on style and low on substance. The action bits are good but Remo has stretched these scenes unnecessarily. Moreover, he, the makers and writers have tried every gimmick in the book to appeal to Salman fans. Even dialogues and scenes are something that are tailor made for bhai fans but they appear unconvincing and evoke disappointment.
The first half of RACE 3 is quite horrible and there’s absolutely no story. It’s only in the second half that the film boasts of some worthwhile moments. There’s no doubt that the film looks rich. Each and every frame is a visual delight and it shows that the money has been spent like water. The makers have even left scope for a sequel. However, one really doubts whether the RACE franchise would now be carried forward. At 2.40 hours, the film appears too long. Some of the scenes are so corny that it would surely become the talking point of social media in days to come.
Talking of performances, Salman Khan does well and is in a way the saving grace of the film. He’s not in his top form like he was in his last film TIGER ZINDA HAI [2017]. But he sails through the film with his performance. Jacqueline Fernandez is shockingly disappointing and she struggles to act. Bobby Deol (Yash) is also strictly okay. There was an excitement to see him after a hiatus and he’s sure to disappoint his fans and admirers. Anil Kapoor however puts his best foot forward and is impressive. His look is also quite great. Daisy Shah and Saqib Saleem are hardly memorable. Same goes for Freddy Daruwala (Rana).
The songs of RACE 3 fail to meet the expectations. However, ‘Allah Duhai Hai’ and ‘Selfish’ are quite memorable and are picturised brilliantly. ‘Heeriye’ leaves a bit of a mark. The rest of the songs are forgettable. Salim-Sulaiman’s background score is much better and it adds to the thrill and dramatic element.
Ayananka Bose’s cinematography is eye catching and captures the locales of U.A.E and Thailand very well. Rajnish Hedao’s production design is classy while Anal Arasu and Thomas Struthers’s action lifts the film to an extent. But again, it’s not as spectacular as Salman’s previous films like TIGER ZINDA HAI and KICK [2014]. Steven Bernard’s editing is haphazard and the film could have been smoother and shorter in length. Manish Malhotra, Ashley Rebello, Alvira Khan Agnihotri, Anaita Adajania, Akshay Tyagi and Rhea Kapoor’s costumes are quite good and suit the financial status of the characters.
On the whole, RACE 3 is high on style and low on substance. It lacks entertainment value and is a disappointing fare due to its wafer thin plot. At the box office, the movie will take a jump start due to Salman Khan’s star power and accelerate over the weekend, post which, the business will see a sizeable drop. The film will entail losses to the distributors.
Courtesy :http://www.bollywoodhungama.com