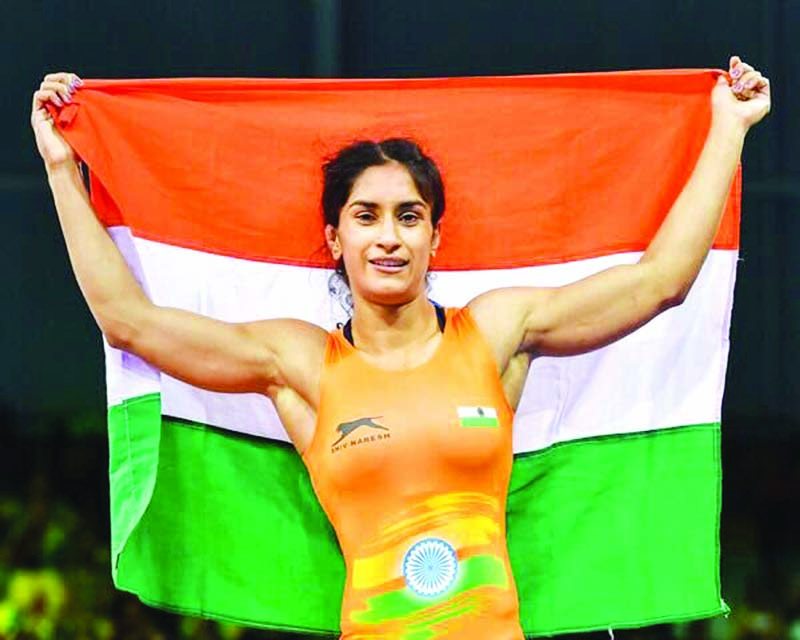 With the end of yet another year, we look back in wonder some of the high and lows for India which won 69 medals in the Asian Games in the highest ever haul for the country.
Asian Game
India’s final collection of medals at the 18th Asian Games in Jakarta and Palembang, Indonesia was 69 medals – 15 gold, 24 silver and 30 bronze in the best ever performance for the nation. This is also the Games in which India got the first medal in Sepak takraw, a traditional game of Southeast Asian nations.
Rahi Sarnobat became first Indian woman to clinch an Asian Games gold in shooting while Vinesh Phogat achieved the same feat by winning gold in wrestling.
India in 2018 participated in the Asiad with 570 athletes. There were multiple games including Wushu, Pencak Silat and Bridge.
Some of the memorable gold medal winners are Arpinder Singh (triple jump), Swapna Barman (Women’s heptathlon) and Neeraj Chopra (javelin throw).
India Women’s squad also won the Silver in Compound Archery.
The medal win in individual badminton events by two female shuttlers was also historic for Indians at the Asian Games. PV Sindhu and Saina Nehwal lifted a medal each in the individual event, both scripting history as this was the first time Indian shuttlers did so.
In boxing, Amit Panghal bagged a gold medal, in the 49kg category.
Indian table tennis squad comprising players like Sharath Kamal, G Sathiyan and Manika Batra performed well. India bagged two medals in Table Tennis with Kamal, Sathiyan, Manav Vikash, Anthony Arputharaj and Harmeet Desai winning the bronze in Men’s Team event and Kamal pairing up with Batra clinching the bronze in mixed doubles.
India’s men hockey team however disappointed by settling for just a bronze. They had lost to Malaysia in the semis.
Cricket The real dominance in Indian cricket was once again shown by none other than flamboyant skipper Virat Kohli. The year went on high for him, continuing the momentum which he carried for last few years. He became the first Indian batsman to hit three consecutive ODI centuries against Windies in Pune. He scored 140, 157 and 107 in the three matches respectively. He also achieved the feat of becoming highest ODI run scorers for India playing at number three position. He scored five centuries in last six innings on home soil. However, India’s foreign tour was not so good to be remembered. India were defeated severely in both South Africa and England. Though Kohli and coach Ravi Shastri tried to put up a brave face, the Indians were found biting dust on foreign soil. Towards the end of the year, India are smelling a historic series win against Australia at the latter’s backyard as the competition is now balanced 1-1. The Indian women’s cricket team failed to win the T20I World Cup. After winning over Australia, New Zealand, Pakistan and Ireland, India failed to defeat England, end the tournament with eight points.
Football In the world of football, it was a comeback by France into the world cup. With the setbacks from Germany, Argentina, Brazil, it were France and spirited Croatia which have boiled up to the topmost phase. However, France emerged victorious in the world cup final.
Football star from Argentina, Lionel Messi, failed once again to fulfill his dream to lift the world cup wearing the blue and white jersey. Ronaldo and Neymar, players of Portugal and Brazil, have also failed to clinch the world cup victory.
In one of the rarest moments, Indian football captain Sunil Chhetri appealed to all the fans to turn up at the stadium to view the intercontinental cup matches in Mumbai. Eventually a huge crowd gathered at the stadium in the final which was won by India. In the final, Chhetri equalised Messi’s number of goals record of 64.
Hockey World Cup 2018 Saina Nehwal, one of the biggest badminton icons and Olympic medalist of the nation, finally tied the nuptial knot with shuttler Parupalli Kashyap. She joined the long list of Indian celebrities, which include names like Bollywood actors Deepika Padukone and Priyanka Chopra, who decided 2018 to be the perfect year to start a new chapter in their lives.
Sindhu, Saina remain badminton’s biggest stars P V Sindhu struck gold just in time to shake off the choker’s tag, Saina Nehwal’s second coming kept getting better and Lakshya Sen was the proverbial one for the future in Indian badminton’s continuous onward march globally even though the title count took a hit.
In a year when the world body (BWF) introduced a new tournament structure, under which events were graded on stature based on prize money, Sindhu dominated the headlines with silver medals in all major events before a World Tour Finals crown.
She finally redeemed herself with the World Tour Finals gold. On the other hand, Saina, whose recovery from a career-threatening knee injury began with a World Championship bronze last year, also produced some impressive performances this year. She also reached the finals at the Indonesia Masters, Denmark Open and Syed Modi International, besides winning bronze medals at Asia championship and Asian Games.
The trailblazer also embarked on a brand new personal journey after tying the knot with fellow shuttler Parupalli Kashyap, a 2014 CWG gold-medallist.
In the men’s circuit, Sameer Verma raised the bar with three titles — Swiss Open Super 300, Syed Modi International Super 300 and Hyderabad Open Super 100 event. A semifinal finish at his maiden World Tour Finals propelled him to a career-best ranking of world no 14.
The prodigal talent of 17-year-old Lakshya gave the belief that Indian badminton is in safe hands. He clinched the Asian Junior Championships title and silver and bronze medals at the Youth Olympic Games and World Junior Championships respectively. However, the unprecedented number of titles that Indian shuttlers won last year couldn’t be matched this season as star shuttler Kidambi Srikanth looked a pale shadow of his past self, failing to lay claim to a single title even though he made the quarters and semifinals regularly. In doubles, Chirag Shetty and Satwiksairaj Rankireddy reached greater heights, becoming the first Indian men’s doubles pair to win a silver at CWG, besides winning the Hyderabad Open Super 100 and finishing runners-up at the Syed Modi Super 300 tournament to stay inside the top 20. Ashwini Ponnappa too continued her love affair with the Commonwealth Games, adding a bronze medal to the gold (2010 edition) and silver (2014 edition) medals with her women’s doubles partner N Sikki Reddy. The duo also finished runners-up for the second successive time at Syed Modi.
Sourabh Verma too returned from injury to claim a place in the Asian Games team after winning a domestic tournament. He later won the Dutch Open Super 100 event in October. Subhankar Dey had a breakthrough year as he claimed his maiden international title with the SaarLorLux Open Super 100 event.
Superwoman of India Mary Kom, a mother of three, was showcasing glimpses of her vintage self during the final of women’s 48 kg bout at Women’s World Boxing Championships 2018 in front of a packed crowd at the Indira Gandhi Indoor Stadium in New Delhi. Having been away from the boxing ring for a long time, Mary returned to competitive boxing and the 48 kg category only last year. The seasoned boxer, who seems to have successfully put behind the memories of Rio Olympics disappointment, announced her comeback by winning the Asian women’s boxing championships in Vietnam.
It took eight long years for the record-breaking gold to come Mary’s way, but when it came, the entire nation erupted in joy.
(Inputs from PTI) (TWF)