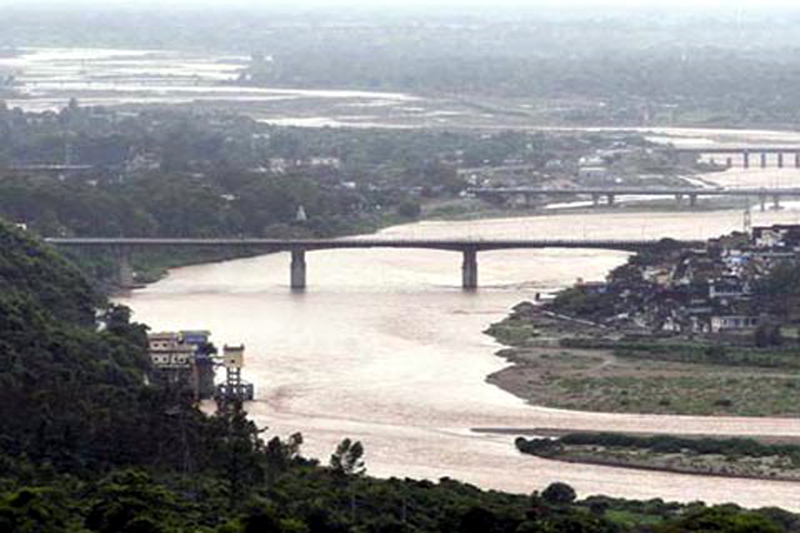 *BOD reduces by about 53% in one month only

Mohinder Verma
JAMMU, May 31: In an another evidence of Novel Coronavirus lockdown turning out to be a boon for the environment, the health of River Tawi in Jammu, which is also known as ‘Surya Putri’, has improved significantly in just one month.
Not only this, the improvement in the water quality has brought to the fore the fact that mainly commercial establishments are the polluters of the river and action plan is required to be prepared with much focus on this particular aspect.
As per the environmental experts, Biological Oxygen Demand (BOD) indicates the amount of organic matter present in the water. A low BOD is an indicator of good quality water while as high BOD indicates polluted water.
Since BOD refers to the amount of oxygen required for the biotic degradation of organic matter in bodies of water, it is considered as a major pollution parameter to assess the quality of effluent or wastewater.
As per the standard parameters, the Biological Oxygen Demand should be less than 2 milligrams per litre and water is considered as polluted when the BOD crosses 2 milligrams per litre.
Tawi is among the nine rivers in Jammu and Kashmir whose polluted stretches have been identified in pursuance to the directions issued by the National Green Tribunal (NGT) and they have been placed accordingly in the priority list by the Central Pollution Control Board.
River Tawi has five kilometre long polluted stretch from Surajpur to Belicharana and BOD of this stretch range from 5 milligrams per litre to 8.3 milligrams per litre as such it has been placed at fourth place in the priority list.
As per the figures of the Jammu and Kashmir Pollution Control Board, which have also been shared with the Central Pollution Control Board, the quarterly average BOD level below Tawi Bridge between January and March 2020 was at 2.4 milligrams per litre while as the same at Bhagwati Nagar was 7.3 milligrams per litre. At Belicharana and Surajpur, the same was 0.4 and 0.3 milligrams per litre respectively.
However, in the month of April this year when there was strict COVID-19 lockdown, the BOD level reduced significantly at all these four locations. Below Tawi Bridge the BOD was recorded at 1.5 milligrams per litre while as at Bhagwati Nagar the same registered decline to 3.0 milligrams per litre. At Belicharana and Surajpur the same was recorded at 0.2 and 0.1 milligrams per litre.
This indicates that there was 37.5% reduction in BOD below Tawi Bridge, 58.9% reduction at Bhagwati Nagar, 50% at Belicharana and 66% at Surajpur. “Overall BOD level reduction in stretch from Below Tawi Bridge to Surajpur in the month of April was 53%”, read the figures of the J&K Pollution Control Board, the copy of which is available with EXCELSIOR.
The significant reduction in BOD level has been recorded at these four monitoring stations of the J&K Pollution Control Board despite the fact that 18 nullahs —13 from Jammu city side and 5 from Bikram Chowk side continued to discharge untreated water into the river.
“These nullahs generally carry major pollutants from the commercial establishments like restaurants, dhabhas, slaughter houses, hotels, lodges and service stations/vehicle repair shops and because of their closure due to COVID-19 lockdown restrictions these nullahs carried only waste water from the residential houses as such there was drastic reduction in the BOD level”, sources in the Pollution Control Board said.
Even washing of commercial vehicles along the banks of River Tawi was contributing to its pollution and during lockdown no such activity was noticed at any point along the river, sources further said.
This has brought to the fore the necessity of giving practical shape to the plan of diverting all these nullahs so as to prevent flow of pollutants as early as possible, sources said, adding “moreover, there is dire need to ensure that all the commercial establishments which fall in the category of relevant laws should install sewage treatment plant so that health of River Tawi, which is also known as Surya Putri, is improved further.
It is pertinent to mention here that Division Bench of the Jammu and Kashmir High Court in the month of November 2017 had observed, “quality of River Tawi is better in the upstream but it deteriorates as river enters the municipal limits. The most polluted stretch of River Tawi is within the municipal limits of Jammu city mostly due to discharge of untreated sewage”.
Accordingly, Division Bench had passed several directions to the concerned authorities for initiating corrective measures but unfortunately there is no improvement in the situation till date because of the non-serious approach of those authorities which are supposed to play crucial role in diversion of nullahs.