PESHAWAR, Aug 19:  A local leader of hardline Islamic party Jamiat Ulema-i-Islam (JUI-F) was today shot dead by unidentified gunmen near a mosque in Pakistan’s restive Khyber-Pakhtunkhwa province.     The assailants on a motorcycle fired at Maulana Syed Attaullah Shah as he came out from the mosque after early morning prayer in Dera Ismail Khan city, police said.     The gunmen managed to flee from the scene.     No one has yet claimed the responsibility for the attack.     A contingent of police reached the scene and started investigation after collecting evidences from the spot. (PTI) 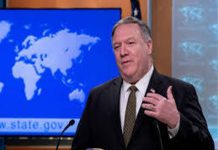