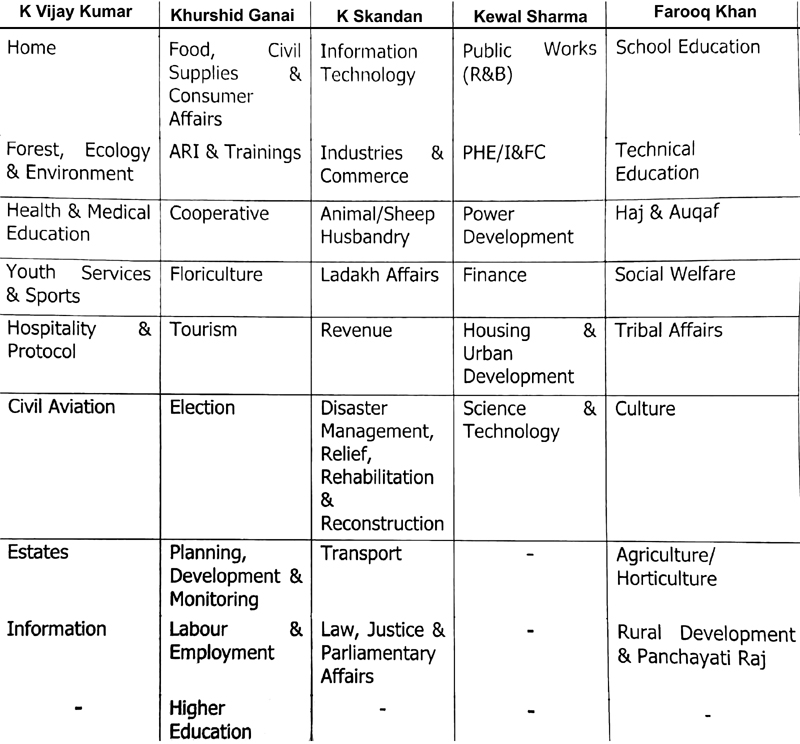 Sanjeev Pargal
JAMMU, July 17: Governor Satya Pal Malik today carried out major reshuffle of portfolios among his Advisors, which was necessitated following induction of fifth Advisor, Farooq Khan, a retired IPS officer, who had taken the charge yesterday after resigning as Administrator of Union Territory of Lakshadweep, about two years ahead of completion of his term.
Advisor K Vijay Kumar retained all his departments including the prestigious Home.
Significant portfolio of General Administration Department has not been allocated to any of the five Advisors. Papers related to the General Administration will continue to be submitted by Chief Secretary BVR Subrahmanyam to the Governor directly.
The list of portfolios released by the General Administration Department revealed that Farooq Khan got charge of a total of nine Departments, six of which were taken away by the Governor from Advisor Khurshid Ganai and three from K Skandan. However, Ganai was given two additional portfolios-one each taken from K Skandan and Kewal Sharma.
Farooq Khan has been given charge of School Education, Technical Education, Haj & Auqaf, Social Welfare, Tribal Affairs and Culture, all six which were presently held by Khurshid Ganai.
Khan was also allocated Rural Development and Panchayati Raj, Agriculture and Horticulture, which were with K Skandan.
However, Khurshid Ganai has been assigned charge of Planning Development and Monitoring Department, which was hitherto held by Kewal Sharma and Election, which was with K Skandan.
Ganai will also retain his Departments including Food, Civil Supplies and Consumer Affairs, ARI & Trainings, Cooperative, Floriculture, Tourism, Labour and Employment and Higher Education.
Advisor K Vijay Kumar’s portfolios remained untouched. Neither any Department was taken from him nor was he allocated any new Department.
Vijay Kumar will be Incharge of powerful Home Department besides Forest, Ecology & Environment, Health and Medical Education, Youth Services and Sports, Hospitality and Protocol, Civil Aviation, Estates and Information.
Advisor Kewal Sharma will now hold the charge of Public Works (R&B), PHE, irrigation and Flood Control, Power Development Department, Finance, Housing and Urban Development and Science and Technology.
K Skandan will be Incharge of the Departments including Information Technology, Industries & Commerce, Animal/Sheep Husbandry, Ladakh Affairs, Revenue, Disaster Management, Relief, Rehabilitation and Reconstruction, Transport and Law, Justice & Parliamentary Affairs.
However, since Ganai is proceeding on Haj pilgrimage, the Governor has allocated charge of his Departments among the Advisors till his return.
Charge of ARI & Training and Cooperatives Departments will be held by K Vijay Kumar while Food, Civil Supplies & Consumer Affairs will remain with Kewal Sharma. The charge of Floriculture and Tourism has been assigned to K Skandan while Labour & Employment, Election and Higher Education Departments will be looked after Farooq Khan.