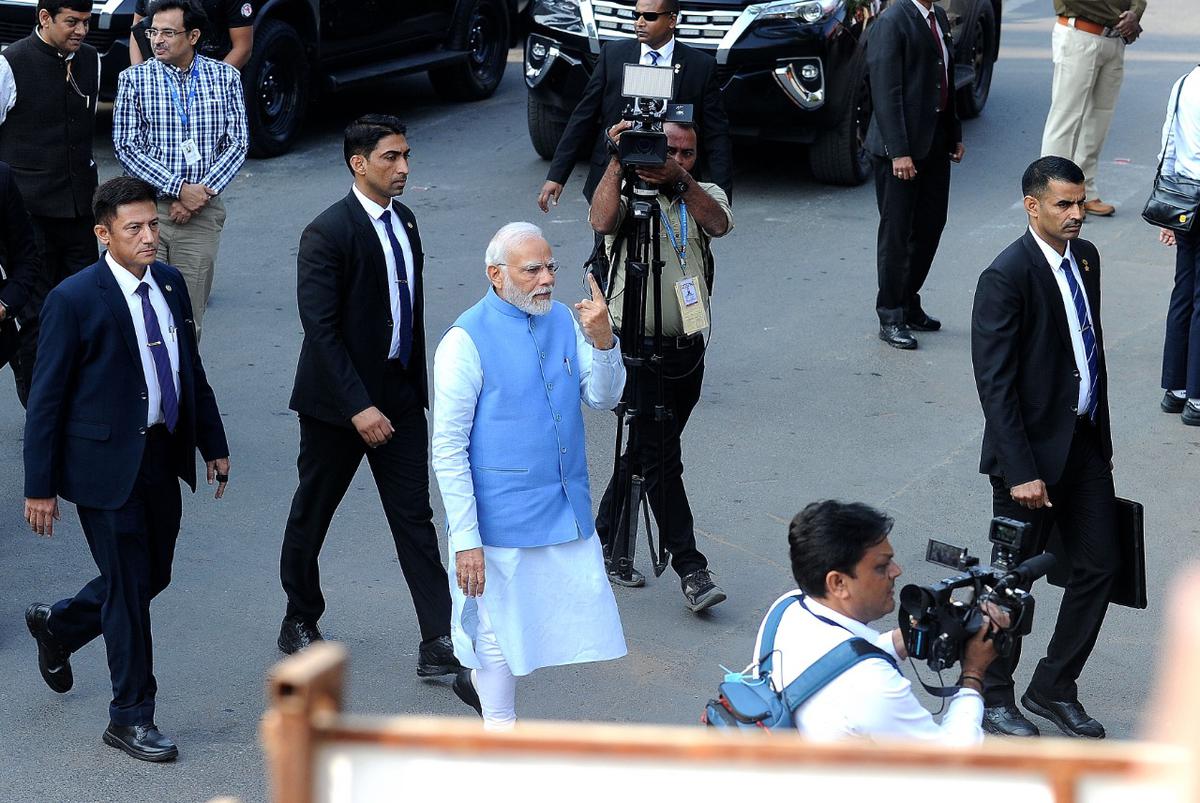 Gujarat, Dec 5: Prime Minister Narendra Modi cast his vote in the second phase of assembly elections in Gujarat’s Ahmedabad on Monday.
PM Modi exercised his franchise at Nishan Public School, Ranip in Ahmedabad. Earlier, he left from Gandhinagar Raj Bhawan to cast his vote.
PM Modi also greeted people on his way to the school ahead of casting his vote. At the polling booth, he stood in the queue waiting for his turn to vote.
Earlier today, he urged the people of the state to vote in large numbers. The voting began at 8 am today and will continue till 5 pm.
“Urging all those who are voting in Phase 2 of the Gujarat elections, particularly the young voters and women voters to vote in large numbers. I will be casting my vote in Ahmedabad at around 9 AM,” PM Modi tweeted.
Union Home Minister Amit Shah will also cast his vote in the second phase in Ahmedabad today.
Polling in the second and final phase is being conducted for 93 Assembly constituencies across 14 districts of north and central Gujarat. As many as 833 candidates from 61 parties are in the fray in the second phase of the Gujarat elections whose fate will be decided by over 2.51 crore electorates.
The Election Commission has established 26,409 polling booths and nearly 36,000 Electronic Voting Machines (EVMs) will be used for the purpose. Around 29,000 presiding officers and over 84,000 polling officers have been deployed in 14 districts to facilitate the polls.
According to Gujarat’s Chief Electoral Officer P Bharathi, of the total 26,409 polling stations, 93 are model polling booths, 93 are eco-friendly booths, another 93 are managed by Divyang and 14 are managed by youth. Webcasting is being done in 13,319 polling booths in the second phase.
“Total of 2,51,58,730 voters will vote, of which, 1,29,26,501 are men, 1,22,31,335 are women and 894 are from the third gender,” Bharathi said.
The 93 poll-bound seats in the second phase are spread across Ahmedabad, Gandhinagar, Mehsana, Patan, Banaskantha, Sabarkantha, Aravali, Mahisagar, Panchmahal, Dahod, Vadodara, Anand, Kheda and Chhota Udaipur districts.
Among the key constituencies in the final phase are Ghatlodia, which will determine the poll fate of Gujarat Chief Minister Bhupendra Patel; Viramgam where Patidar leader Hardik Patel will contest as a BJP candidate, and Gandhinagar South where the saffron party has fielded Alpesh Thakor.
The Leader of the Opposition, Congress’ Sukhram Rathava will contest from Chhota Udaipur, while Lakhabhai Bharwad, Jignesh Mevani and Amee Yajnik are some other prominent Congress names from Viramgam, Vadgam and Ghatlodia seats.
From the Aam Aadmi Party (AAP), Bharat Vakhala from Devgadhbaria, Bheema Chaudhary from Deodar, Dolat Patel from Gandhinagar South, Kunwarji Thakor from Viramgam and Vijay Patel from Ghatlodia will test their electoral fortunes in the second and final phase on Monday.
The high-octane campaigning for the second phase of the Gujarat Assembly elections came to an end on Saturday evening, which saw big shots across parties trying to woo voters.
Among prominent names who will cast their votes in the final phase in Gujarat are PM Modi, Union Home Minister Amit Shah, Uttar Pradesh Governor Anandiben Patel, Isudan Gadhvi, Gujarat Congress president Jagdish Thakor and cricketers Irfan Pathan, Hardik Pandya and Krunal Pandya.
During the first phase of polling on December 1, Gujarat saw an overall turnout of 63.14 per cent. The voting began at 8 am in 89 constituencies spread across 19 districts of Kutch, Saurashtra and South Gujarat regions.
The first phase of voting for 89 seats in Kutch, Saurashtra and South Gujarat ended on December 1, with an overall turnout of 63.31 per cent.
The results of the Gujarat and Himachal Pradesh Assembly election will be announced on December 8. (Agencies)