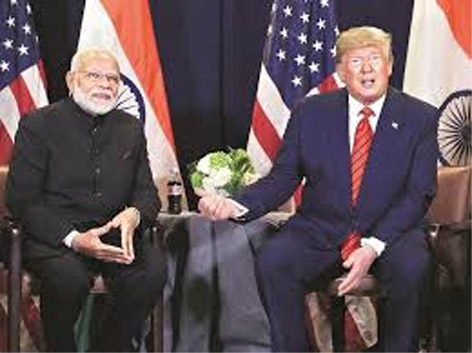 WASHINGTON, Feb 21: Growing defence trade between India and the US has strengthened the relationship between the two countries, a top American expert has said, noting that much remains to be done for cooperation in this sector to reach its full potential.
In October, the Pentagon said the bilateral defence trade between the two countries is expected to reach USD 18 billion by the year end.
“Bilateral defence trade, essentially zero in 2008, will reach an estimated USD 18 billion later this year,” Undersecretary Of Defense For Acquisition And Sustainment Ellen M Lord had told reporters head of the ninth India-US Defence Technologies and Trade Initiative or DTTI group meeting in New Delhi.
“The growing US-Indian defence trade has also strengthened the relationship between the two countries. India was once overly dependent on Russia for defence procurement, but in recent years, it has begun to purchase more high-tech defence goods from US suppliers,” said Ashley J Tellis, who holds the Tata Chair for Strategic Affairs and is a Senior Fellow at the Carnegie Endowment for International Peace.
Writing in the Foreign Affairs magazine, Tellis in his column titled ‘The Surprising Success of the US-Indian Partnership: Trump and Modi Have Deepened Defence Cooperation Against the Odds’ said that although India can’t accede to Trump’s demand that it sever defence ties with Russia entirely, it has managed to become an important market for advanced American weapons.
“Currently, India hopes to purchase US antisubmarine and antitank warfare helicopters, advanced surface-to-air missiles, naval guns, unmanned aerial vehicles, and long-range maritime patrol aircraft. Deals for some of these may be announced during Trump’s visit next week,” Tellis wrote on Thursday.
Observing that the defence trade between the two countries is not without limits, he said weapons systems used to operate independently, making India’s traditional a la carte approach to arms acquisition sustainable. The Indian defense inventory could, for example, consist of French fighter jets, Russian surface-to-air missiles, Israeli unmanned aerial vehicles, and European radars, he said.
But in an era of networked warfare, the United States and European nations (and private suppliers) balk at integrating their systems with those provided by strategic rivals, such as Russia.
Such considerations will either limit India’s acquisition choices or compel it to settle for incomplete integration, forgoing the benefits of fully networked military systems, Tellis said.
“India’s desire for defence-trade autonomy, in other words, is beginning to collide with the emerging realities of information-age warfare,” he wrote.
India is not a US ally, but New Delhi has nonetheless moved proactively to pursue military activities that both advance its own interests vis-a-vis China and hold out the promise of reducing the burdens borne by US forces in the event of future crises or wars in India’s extended neighbourhood, he adde
“For all the progress of recent years, much remains to be done for US-Indian defence cooperation to reach its full potential,” Tellis said.
For starters, the Modi government needs to jump-start the flagging Indian economy, he said.
Slowing growth bodes ill for India’s capacity to modernise its military fast enough to both balance out China’s growing power in its neighbourhood and expand defence trade with the United States.
“India’s woeful defence-procurement system also needs to be reformed. New Delhi treats defence acquisition as industrial and employment policy rather than as a mechanism for obtaining the military equipment its armed services need for operational success,” he said.
The Indian military also needs to change its mindset from a frontier defence force to an expeditionary one capable of projecting power beyond the subcontinent, he said, adding that although it is competent and professional, it is still highly conservative.
Its technology, doctrine, and tactics are all driven mainly by the need to defend India’s borders with China and Pakistan — making it a less capable US partner when it comes to providing security across the wider Indo-Pacific, he wrote.
“More than anything else, however, the future of the US-Indian defence relationship hinges on India’s ability to maintain prosperity, stability, and social cohesion at home.
“An India that is distracted by internal strife, domestic cleavages, and corrosive ideological confrontations will be unable to either grow rapidly or modernise its military fast enough to project power beyond the Indian subcontinent,” Tellis said. (PTI)