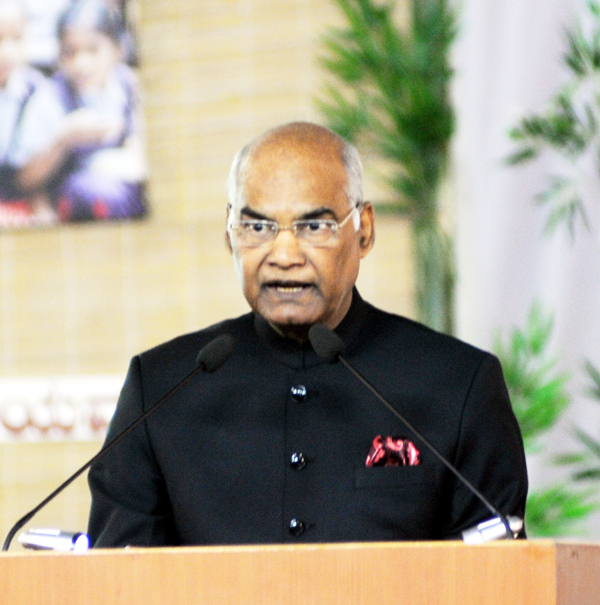 BENGALURU, Dec 30: President Ram Nath Kovind expressed deep concern over increasing number of people with mental health problems and wanted a manifold increase in the number of experts in the field to meet the challenge.
Delivering the 22nd Convocation address of the National Institute of Mental Health and Neuro Sciences (NIMHANS) here on Saturday, he said the recent NIMHANS survey listing 10 per cent of the country’s population being affected with some type or other cases of mental illness was staggering.
”We are witnessing demographic and economic changes in the country that has resulted in increased incidents of physical and mental stress leading to mental illness. The NIMHANS’ health survey is alarming. With 10 per cent of the 1.3 billion people being affected by psychological problems, this surpasses the total population of Japan,” he said.
Mr Kovind said ‘triple burden’ — common health problems, severe mental illness and use and misuse of substances, are the biggest challenges the country was facing at present. It was not only the old but the younger generation are also being affected for reasons that are a cause of changed lifestyle and profession.
He called for uprooting of the stigma that the persons who are mentally ill are facing for many years is ended, as stigma would further worsen their health conditions. Ailments like depression should not be ignored but taken very seriously. Awareness and education can go a long way in eradicating such problems, he said.
”I strongly advocate implementation of Bellary Model of Community Based Mental Health programme’ developed by NIMHANS.  This is a template in mental health service and it should be adopted in other districts of the country,” he said.
The President expressed deep concern of insufficient number of medical professionals the country suffered from. He said the major gap of shortage of health professionals in this space was the main reason for the major gap in providing treatment.
There were only 5000 psychiatrists and less than 2000 clinical psychologists in the country. These numbers are very small, especially for diagnosis of mental illness. It is advisable to use psychologists and physicians who teach in medical colleges as well as para medical personnel who are in frontline of public health system across the country, he said.
Saying that the national mental survey is a wake up call, the President said the new national mental health policy could go a long way in ensuring effective treatment to people affected by mental health. It was an earnest and broadbased effort and important as the country had set ambitious but achievable target in mental health service and make sure we reach them with a tight  deadline.
He said in 2022, India will be celebrating 75th anniversary of Independence. It is desirable that by then those with severe mental disorders are diagnosed and given access to treatment. This should be taken up as a national vision. NIMHANS has to draw a road map and be the guiding light to achieve this, Mr Kovind said.
He called for continuous capacity building in NIMHANS that will help in achieving this goal.
Heaping praise on NIHAMS he said it was a national asset with integrated education with research and and medical service. The institute treat mostly poor people and it was commendable effort.
He congratulated 175 graduating students and said their challenge begins now as India was facing a major challenge as it is facing a  possible mental health epidemic. (UNI)