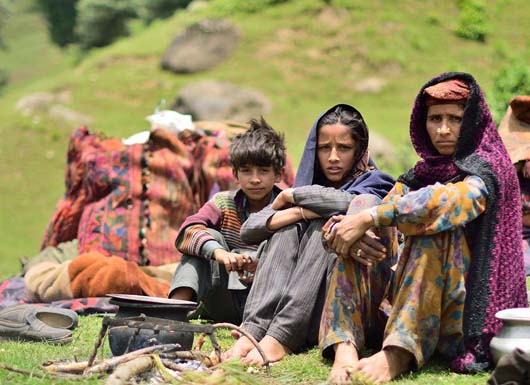 Ronik Sharma
After a long gap of more than three decades Pahari tribe is still feeling and facing discrimination in comparison with other Scheduled Tribe categories in the case of reservations in Jammu and Kashmir.The population of the Pahari tribe is mostly concentrated in twin border districts Rajouri- Poonch and some other parts of Jammu and Kashmir and is very poor, socially and economically. Most of the population of Pahari tribe resides along the Line of Control in different parts of Jammu and Kashmir.Pahari tribe not only maintains communal harmony, unity in diversity but also have similar rich culture and civilisation.The Pahari population has experienced tremendous hardships during the wars since 1947 onwards and due to anti terrorists operations and active terrorism in J&K.The education as well as educational institutions were the worst sufferers during cross-border firings and the effected children failed to get proper education due to these reasons. During cross-border shellings Pahari tribe suffer a lot and their houses also get damaged and farmers are unable to get crop cultivations in time.This long period of more than thirty years periods since the 1990s has not only pushed back their generations of Pahari Tribe but also prevented them from many other opportunities like education, admissions, jobs, scholarships, developmental activities, Tribal Sub Plans, etc. which the other Scheduled categories have been enjoying since 1990s. Apart from social and economic benefits, Pahari tribe people are still fighting for their identity which they have been denied by the successive governments in the erstwhile State of Jammu of Kashmir as well as by the Central Government.Excluding Pahari tribe from Scheduled tribe categories list weakened a large section of secular society. The Kashmir Centric leadership and power centric people failed to provide Pahari tribe justice. They provided only hollow assurances and false promises. This created societal difference between Pahari tribe and rest of the scheduled tribe categories. It is a known fact that the then Government in Jammu and Kashmir vide cabinet decision number 159 dated 8-8 1989 had recommended Scheduled Tribe status for Pahari community but due to unknown reasons the Pahari Community was excluded from final recommendation in which others were conferred with Scheduled tribe status.The genuine and deserving people with all characteristics of a tribe became agitators and protesters due to negligence and ignorance of high headedness of few leaders. Due to partial decision the Pahari tribe people and their generations are still feeling neglected from other Scheduled Tribes categories. The politicians in the successive Governments took them very lightly, and no necessary steps were taken by them to project their genuine case before the Union Government. Successive Governments have always exploited this section of the society for vote bank politics but now the Pahari tribe is sure and confident that BJP has the historical responsibility to make it happen in this tenure which will reflect the seriousness of BJP for empowering this community. This is appropriate time for the Central Government under leadership of Prime Minister Narendra Modi to take some serious steps in favour of the Pahari tribe by granting them Scheduled Tribe (ST) Status. They are still feeling discriminated against, unjustified and isolated. Paharis have not been given their legitimate and legal rights by the successive governments at the Centre.This move will not only save the distant culture, language, ethnicity, composite cultural identity, etc. but also unity in diversity. With the announcement of scheduled Tribe status for Pahari tribe, Central Government should also announce a one-time package in different sectors like education, jobs, agriculture, horticulture, industrial area, interest free loans, etc. to uplift the backward section of the society feeling discriminated since long back.
The Prime Minister of India as well as Home Minister of India are requested that despite many recommendations, assurances no decision has been taken so far for granting “Scheduled tribe” status to Pahari tribe.It is expected that the present government will do justice this time with economically backward and poor Pahari tribe. The Government of India is very much concerned about weaker sections of the society and for their upliftment, on the same analogy the Pahari tribe shall be considered for their genuine demand sympathetically and provide them scheduled tribe Status.The President of India is beseeched to declare Pahari community of Union Territory of Jammu and Kashmir as a Tribe by including them the Scheduled Tribe, of course in consultation with Lieutenant Governor of Union territory of J&K.