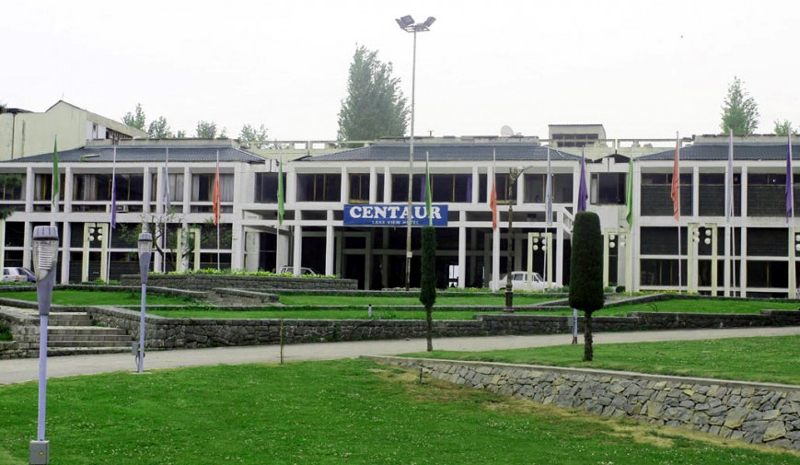 Admn rejects Rs 2.65 cr bill
Fayaz Bukhari
SRINAGAR, Nov 3: Government is contemplating to shift the political detenues from Centaur Hotel in Srinagar to any cheaper hotel in high security zone in Badami Bagh Cantonment area after Indian Tourism Development Corporation (ITDC), submitted a bill of Rs 2.65 crore to the Home Department for their boarding and lodging.
The Jammu and Kashmir administration is looking for an accommodation to shift 34 political detenues from Centaur Hotel here and they have already surveyed LemonTree Hotel in high security zone area of Shivpora near BB Cantt in Srinagar.
The National Conference, People’s Democratic Party (PDP) and People’s Conference leaders are being detained in the hotel since early August 5 when the Central Government announced itsdecision to abrogate Jammu and Kashmir’s special status under Article 370 of the Constitution and split the State into two Union Territories.The Centaur Hotel which is owned by the Indian Tourism Development Corporation (ITDC), has submitted a bill of Rs 2.65 crore to the Home Department for 90 days of boarding and lodging of the detenues.
They have charged them as per the tariff of the hotel. The administration has, however, rejected the claims of the Hotel.They have told the ITDC that the facility was converted into a subsidiary jail on August 5 and therefore, Government rates would apply and not the hotel tariff.
The rates sanctioned by the administration would be around Rs 1000 per day as against Rs 5,000 charged by the hotel. The MLA hostel on Residency Road in the heart of the city was thought to be an alternative accommodation, but it is now occupied by former MLAs hailing from Jammu and newly elected Councillors.
Sources said that some of the detenues may be released after taking a proper bond from them that they may not indulge in any activity thatwill lead to breach of peace. However, others will be shifted out of the hotel soon.
Those who are jailed include Sajjad Lone of People’s Conference (PC), Ali Mohammad Sagar of National Conference (NC), Naeem Akhtar of the PDP, former IAS officer Shah Faesal and RTI activist Muzaffar Ahmad Bhat. Few detenues including Imran Reza Ansari and Noor Mohammad Sheikh were released but others continued to be detained.