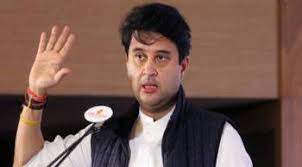 NEW DELHI, Nov 22: The Government is preparing a ‘coking coal mission’ to diversify the sources of key steel making raw material, for which the country is heavily dependent on imports, according to Union Minister Jyotiraditya Scindia.
The mission is part of the Government’s efforts to reduce dependence on imports for coking coal and increase use of locally available coal in the steel making through gasification process, the steel minister told PTI in an interview.
“We (the Government) are in the process of making it (coking coal mission). It is the coal ministry’s purview,” Scindia said in response to a question on the Government’s initiative towards increasing the availability of raw material in the country.
India imports around 90 per cent of its coking coal requirement. The coal produced within the country has high ash content, the minister said.
Coal with high ash content is not suitable for steel making through the blast furnace route.
“So what we are looking at through the coking coal mission which is a two-fold view. Firstly, to diversify our coking coal sources…Second is through coal gasification,” Scindia said.
Without naming any country, the minister said India is looking to engage with a few nations to diversify coking coal sourcing.
In July 2021, the Union Cabinet chaired by Prime Minister Narendra Modi approved a pact between India and Russia regarding cooperation on coking coal.
At present, India imports coking coal from countries like Australia, South Africa, Canada, and the US for sourcing of coking coal. The logistic costs from these distant nations adds to the input cost of the steel players.
On coal gasification, he said the Government is eyeing to set up a coal gasification plant with an annual capacity of 100 million tonnes (MT).
In a gasification process, coal can be converted into syngas which can be used in sponge iron making and it can further be utilised to make steel.
All these measures will help the domestic steel industry, the minister said, adding the government has already removed the duty on steel exports to support the sector.
Multiple rounds of discussions were held with the two separate committees formed for integrated steel plants (ISPs) and the secondary steel sector. Parameters like volatility in the market, price dynamics, supply and demand situations, and raw material, all were taken into consideration before reaching the decision of removing the duty.
Six months after imposition of the levy on May 21, the Government has removed the export duty on steel items and iron ore to nil effective November 19, 2022.
“We (Government) came up with the perspective that we should look at post the monsoon season which is sluggish in terms of demand for the steel sector and movement of raw material and finished steel prices move… Based on that I had committed to both advisory committees that we will take a decision in November. The Government has come good on its commitment,” he said.
There were multiple rounds of negotiations within the Government as well. The Steel Ministry held several discussions with the ministries of coal, mines, home, and commerce and industry, and finally the finance minister pursuant to which the Government has taken the judicious decision, he said.
The domestic steel sector must take advantage of the move, he said.
Scindia also noted that the international situation in terms of demand is not as bright as it had been earlier for obvious reasons that many countries are on the border of recessionary trends.
“There has been contraction in demand but India is an outlier. We have had a very healthy demand for steel and steel products almost in double digit close to 10 per cent as the Prime Minister’s thrust is on infrastructure,” he said. (PTI)