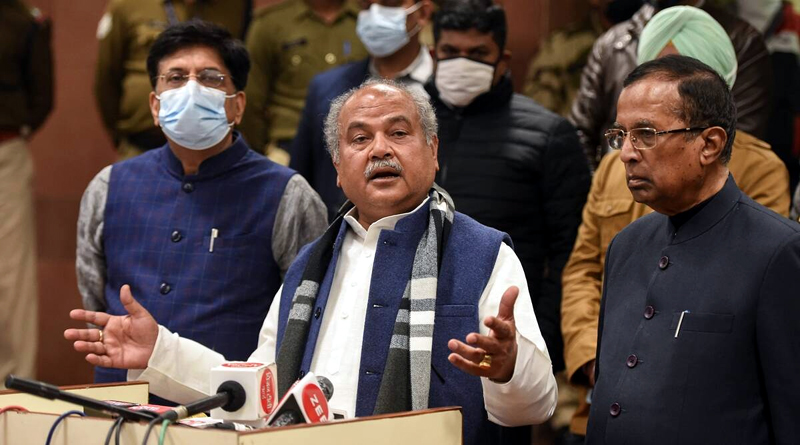 Yielding some ground to end the nearly two-month-long protest by thousands of farmers on the national capital borders, the Government today proposed to suspend the three contentious farm laws for 1-1.5 years and set up a joint committee to find an amicable solution in the interest of the farming community.
During their tenth round of negotiations with three central ministers, the two sides decided to meet again on Friday after the union leaders hold their own internal consultations on Thursday to decide on the government’s new proposal.
Briefing media after a nearly five-hour-long meeting that included two breaks, Union Agriculture Minister Narendra Singh Tomar said the government has proposed to suspend implementation of the three laws for 1-1.5 years, during which period a joint committee of representatives from the government and farmers’ sides can continue their talks and those protesting on Delhi borders in extremely cold weather return to their homes.
The three laws have already been stayed by the Supreme Court till further orders and a committee of experts has been formed to resolve the deadlock. The panel has been asked by the apex court to submit its report within two months after consulting all stakeholders.
The committee held its first meeting on Tuesday and will begin its consultations with farmer groups and others from Thursday.
After the meeting, Bharatiya Kisan Union (Ugrahan) president Joginder Singh Ugrahan said, “The government proposed to suspend the farm laws for one and a half years. We rejected the proposal but since it has come from the government, we will meet tomorrow and deliberate over it.”
Another farmer leader Kavitha Kuruganti said the government also proposed to submit an affidavit in the Supreme Court for suspending the three farm laws for a mutually-agreed period and set up a committee.
Kulwant Singh Sandhu of Jamuri Kisan Sabha said, “The government is on backfoot and it has started yielding ground to us.”
Earlier during the meeting, the government also again offered to amend the three laws but farmer leaders stuck to their demand for a complete repeal and alleged that the Centre was avoiding discussion on a legal guarantee for MSP.
Farmer leaders said there was no breakthrough in the first two sessions as both sides were stuck on their stated positions vis-a-vis the three farm laws and it was clear from the very beginning that there was little hope of any outcome other than fixing the date for the 11th round.
Tomar, however, said the government was keen to reach a final decision in today’s meeting on the auspicious day of Gurupurab and therefore it started with greetings for the occasion.
“The government was ready to discuss provisions of the laws with an open mind and a big heart,” he said.
The minister said the talks were held in a cordial atmosphere despite some ‘naram-garam’ moments (softening and hardening of the stand) and farmers remained adamant on their demand for the repeal of the laws. He, however, asserted that some headway was made towards reaching a solution in the next meeting to end the agitation.
“It will be victory for Indian democracy the day farmers’ agitation ends and they return to their homes,” he said in reply to a question whether it would be a victory for the farmers or the government.
Asked whether the January 22 meeting at 12 pm could be the last one, Tomar said he is hopeful of reaching an amicable solution in the next round of talks.
The minister said the new proposal has been made to allay farmers’ apprehensions and instill confidence that the government is ready for discussion with an open heart.
“The Supreme Court has stayed the agri-reform laws for a short duration. Their implementation will not happen for some time. But, we have been telling the unions that it will require more time to consider the laws and to discuss other aspects related to the agitation. The required time maybe six months, one year or one and half years,” he said.
“Therefore, we told the unions that the government is ready to put on hold the implementation of the laws for 1-1.5 years. I am happy that the farmer unions took this proposal seriously on the birth anniversary of Guru Gobind Singh,” he said.
Asked whether the proposed committee will continue alongside the SC-appointed expert panel, Tomar said, “The government is committed to the Supreme Court and will remain so. The committee appointed by the apex court is doing its job, but the government also has direct accountability towards farmers and the situation arising out of the protest. Therefore, we are taking forward this discussion while discharging our responsibility.”
The modalities of the proposed panel, including the number of members, can be finalised after the two sides reach an in-principle agreement on this proposal, the minister said.
At the meeting, farmer leaders also raised the issue of NIA notices being served to some farmers, alleging it was being done just to harass those supporting the agitation, to which the government representatives said they will look into the matter.
The meeting began at around 2.45 pm with the three ministers greeting farmer leaders on the occasion of Gurupurab and the two sides took a lunch break after around one hour of discussions when farmer leaders had langar food.
The meeting resumed at around 5.15 pm after the lunch break, but the two sides took another break at around 6 pm during which the farmer leaders discussed the government proposal for suspending the laws for a fixed period of time.
Kuruganti said the meeting began with the NIA issue, followed by unions’ demand for a repeal of the laws.
The farmer leaders presented multiple Parliament replies given by the Agriculture Minister where he had stated that agriculture is a state subject, while one reply mentioned even agri-marketing as a state subject.
“The government offered to carry out some amendments, but farmer leaders maintained they do not want anything less than a complete repeal of the laws,” union leader Rakesh Tikait said.