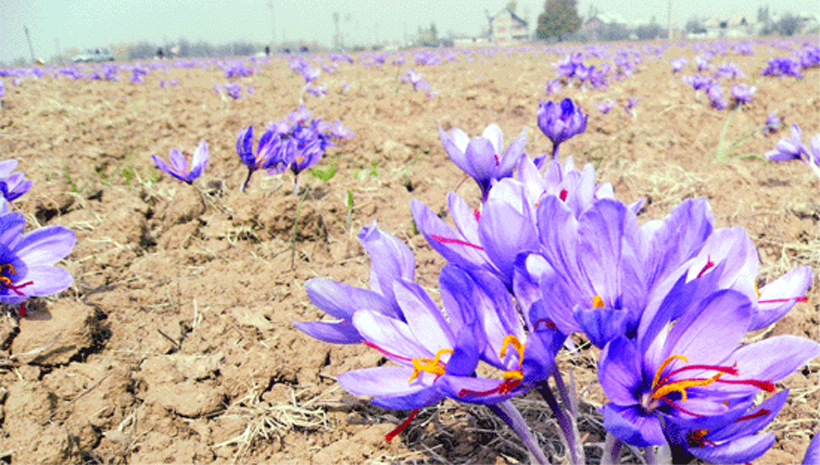 Srinagar, Nov 23: The saffron growers are concerned over a marked drop in the saffron production this year and they attribute it to the administration’s failure to make irrigation facilities functional even as a decade has passed since the scheme was launched.
As per the growers, continuing the trend the harsh weather affected this year’s crop. They said the yield this year was low owing to a lack of irrigation facilities during dry weather. They said the irrigation system would have splashed the fields with water on time and enabled growers to wade off the drought which had been adversely affecting their yields for years.
“The saffron production is affected due to harsh weather. The irrigation system which was set up under the National Saffron Mission was not made useful. They (authorities) have failed to provide the irrigation system. The Government is making efforts but the officers on the ground are showing laxity. The farmers are forced to leave this crop due to the decline,” Aijaz Ahmad Mir, a grower said, including that the drop is affecting the future of the crop as growers are unable to fetch desired profits.
Saffron growers said that thousands of growers who are cultivating saffron over 3000 hectares of land would have availed the irrigation facility and enhanced their production. “The production is low because of the lack of rainfall. The crop requires irrigation in the month of July and August. There was no significant rainfall during that time,” Mohammad Amin, another grower said.
He said his production has decreased for the last 8-years. “I used to get 6-7 kilograms of saffron every year. Now, I get only 1-2 kilograms,” he said. He stressed that the Government should make irrigation facilities available for the growers. “The Government has laid the irrigation pipes here, but they could not operate it. They should have made it function around August,” he said.
On contrary, Altaf Ahmad Andrabi, Director for National Saffron Mission said that they are expecting a good crop this year. “We had rainfall around August this year and that helped in the flowering process,” he said, adding that a heavy snowfall around November last year helped initiate the biological process of multiplication of the corm and that increased the flower count.
Asked about the irrigation system, Andrabi said they had made around 50-irrigation pumps functional and the rest of the wells would be operational in December. “We will provide irrigation facilities during the post-harvest period this year and that will help impact the next year’s crop,” he said.
The irrigation system consists of laying the water supply pipes and installing the sprinklers with all the system being set up to manage the drought issues affecting the area. Setting up an irrigation scheme was part of the Government of India’s ambitious 400-crore National Saffron Mission which was started in 2010.
Under the mission, around 126 bore wells were supposed to be dug up for irrigation purposes, but less than half have been completed so far. The scheme was launched by the Centre in partnership with the Government of Jammu and Kashmir with the aim of raising production from 3 kg to 5 kg per hectare but even after nine years, the scheme is yet to make an impact on the status of the crop.