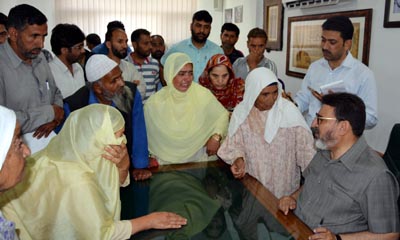 Excelsior Correspondent
SRINAGAR, June 9: Minister for Finance, Labour and Employment, Syed Mohammad Altaf Bukhari today said that the Government  aims to restore the pristine glory of the Srinagar city and that many developmental projects are in pipeline to achieve this goal.
Minister said this while interacting with the people of Srinagar city who called on him during a public interaction program to apprise him about various public grievances. People from various areas of the city and adjoining areas including Amira Kadal, Khanyar, Dargah, Bemina, Dalgate, Sonwar, Chadoora, Hyderpora, Nowgam, Parimpora and other areas called on the Minister to apprise him about various issues.
Bukhari said Government is akin to people’s issues and that Government will take every possible step to redress their grievances. He said transparency and accountability are the benchmarks of the present Coalition Government and there is no space for corrupt practices and persons in the present Government.
He said various innovative measures taken under the leadership of Chief Minister Mehbooba Mufti have brought a visible change in governance in the State and everyone has been made accountable in the system.
Appealing people to become active stakeholders in effective implementation of developmental programmes at the grassroots level, the Minister appealed the people to become eyes and ears of the Government by keeping track of the developmental activities taking place in their respective areas to ensure that quality is maintained in these works besides ensuring transparency.
During the interaction, various delegations apprised Minister about issues confronting them in different sectors including PHE, electricity, health, and renovation of roads, up-gradation of lanes and drains. The Minister gave patient hearing to them and assured that steps will be taken to mitigate their problems.
Minister directed the officials of Power Development Department to ensure regular power supply in Srinagar city and adjoining areas and also directed to ensure uninterrupted power supply for street lighting in the city. Minister also passed on-spot directions to ensure regular water supply and construction of various drains in various parts of the city.
A delegation of PHE daily wagers also called on the Minister to seek redressal of their grievances. Minister assured them that Government will examine their grievances and all their genuine demands will be redressed.