JAMMU, July 18: Accusing the Government of making a mockery of higher education system by opening Degree Colleges in single and two room apartments in various locations of the State, NPP chairman and former Education Minister Harshdev Singh today urged upon the State Governor to ensure provision of adequate facilities before start of academic session in new colleges.
Talking to media-persons here today, Singh expressed dismay that such institutes of higher learning were being established in existing middle schools and in dilapidated private rooms that were unfit even from safety point of view. Only Wednesday, a new Degree College was in-augurated by Secretary Higher Education and made operational in a Panchayat Ghar in village Dadoora, Katra while another one in Neeli Nallah Panchayat Ghar which was unprecedented in the history of the State.

Click here to watch video
The Govt must realize that its a Degree College and not an “Anganwari centre,” cautioned Singh. The most distressing aspect of the matter is utter disregard for and non- provision of desired facilities, staff and other necessary pre-requisites for operationalization of any of these 102 new Degree Colleges announced during the last one year under Governor Rule with not even a single post of teaching or non teaching faculty provided till date, Singh said.
He maintained that these political colleges were being announced only to cheat the people of the State for vote bank politics without they serving the desired objective of diversification of Higher Education.
Expressing dismay over yet another announcement of Secretary Higher Education that Rs 3 lakhs each is being released for every new Degree College, Mr Singh said that the Government had made the most contemptuous mockery of Higher Education system itself. An amount of Rs 3 lakhs did not suffice even for launching a cattle shed and the Government wants to operationalize a Degree college within the said amount, said the former Minister.
He regretted that in Dudu- Basantgarh the poor people were being forced to give their private rooms free of cost to the Government so that it could put up its Degree College Board on those private premises. He said the Govt had forcibly taken affidavits from private parties in Dudu- Basantgarh that they would not demand any rent for the private rooms given by them in case they wanted a Degree College in the area.
Flaying the Government for playing treachery upon the people over the issue of new Degree Colleges, Mr Singh called upon the Governor to sanction Rs 10-15 crore for each Degree College if the Government was really sincere about opening of such colleges in the remote and uncovered areas. He said that NPP would not allow Government to play with careers of students. 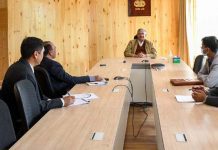 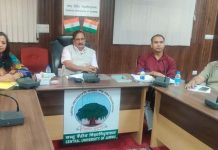