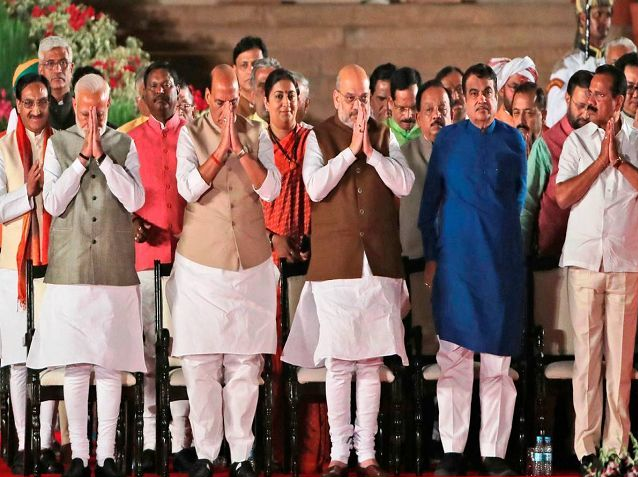 Sanjeev Pargal
JAMMU, Jan 17: As the historic week-long public outreach programme of the Central Government on Jammu and Kashmir will kick off tomorrow, the Centre today announced that the programme will have second phase also and the Ministers, who will not visit the Union Territory in the first phase, will tour different parts of J&K in the next phase.
The second phase was likely to include Defence Minister Rajnath Singh and Home Minister Amit Shah.
Official sources told the Excelsior that around 40 Central Ministers will be visiting different parts of Union Territory from January 18-24 to counter the Opposition propaganda and spread awareness among the people on benefits they will have following abrogation of special Constitutional provisions of Jammu and Kashmir and bifurcation of the erstwhile State into two Union Territories of J&K and Ladakh.
Around 20 Ministers, who will not be able to visit Jammu and Kashmir during first phase of the public outreach programme will tour the Union Territory in the second phase, which will be held after completion of by-elections to over 13,000 vacant seats of Panchayats, sources said.
“Initially around 60 Ministers were scheduled to visit Jammu and Kashmir and the public outreach programme was to last about a fortnight. However, there were reports that the Election Authority could announce schedule of by-elections to 13,000 vacancies in the Panchayats around January 25 and, therefore, the public outreach programme was confined to week and will now end on January 24,’’ sources said, adding that the second phase would be held after the Panchayat by-elections in March.
In the second phase, the Central Government proposed to hold rallies of Defence Minister Rajnath Singh as well as Home Minister Amit Shah while Surface Transport and Highways Minister Nitin Gadkari, Law and Communication Minister Ravi Shankar Parsad, Railways Minister Piyush Goyal, Women and Child Development Minister Smriti Irani and Union Minister of State in the Prime Minister’s Office (PMO), Dr Jitendra Singh are part of the first phase of Ministers.
Dr Jitendra Singh and three other Ministers including Arjun Singh Meghwal, Ashwani Choubey and RK Singh will kick off the public outreach programme tomorrow by holding rallies, seminars, inter-actions and other modes of communication with the people at various places in Jammu and Kashmir.
Meanwhile, the Union Territory Government today released agenda for the visit of Union Ministers to Jammu and Kashmir for one week saying they will review rapid development in all sectors after imposition of President’s Rule in the erstwhile State in June 2018 and August 2019 when special Constitutional provisions of J&K were scrapped and the erstwhile State was bifurcated into the two Union Territories of J&K and Kargil.
Visit of some more Ministers including Road, Surface Transport and Highways Minister Nitin Gadkari, has also been added to the list, official sources said and added that around 40 Ministers were now scheduled to tour different parts of Jammu and Kashmir from January 18-24 to spread awareness among the people about benefits of abrogation of Articles 370 and 35-A and converting J&K into a Union Territory.
“As top Ministers like Nitin Gadkari, several projects of whose Ministry were under construction in Jammu and Kashmir, Railways Minister Piyush Goyal, Human Resources Development Minister Ramesh Pokhryal ‘Nishank’, Power Minister RK Singh and Union Minister of State in the Prime Minister’s Office (PMO), Dr Jitendra Singh were among around 40 Ministers touring the Union Territory, they will also review the working of the projects being executed by their Ministries,’’ sources said, adding that the Union Territory Government has directed all the Administrative Secretaries to brace up for the visit and review of development works.
Sources said there will be specific review of development projects including the Centrally Sponsored Schemes and works taken up under the Prime Minister’s Development Plan (PMDP) during the visit of Ministers especially those whose Ministries were stakeholders in development projects in the Union Territory.
Number of Ministers will also visit Kashmir while majority will tour Jammu division, sources said. The visit of around 40 Ministers will start with the address of Dr Jitendra Singh at Jammu Convention Centre on January 18, they added.
“Themes for the Government of India Ministers’ outreach in Jammu and Kashmir included rapid development after President Rule from June 2018 and now after reorganization in August 2019,’’ an official spokesman of the Union Territory Government tweeted.
Governor’s Rule was imposed in Jammu and Kashmir on June 19, 2018 following withdrawal of support to Mehbooba Mufti-led PDP Government by the BJP while J&K was bifurcated into two Union Territories of J&K and Ladakh on August 5.