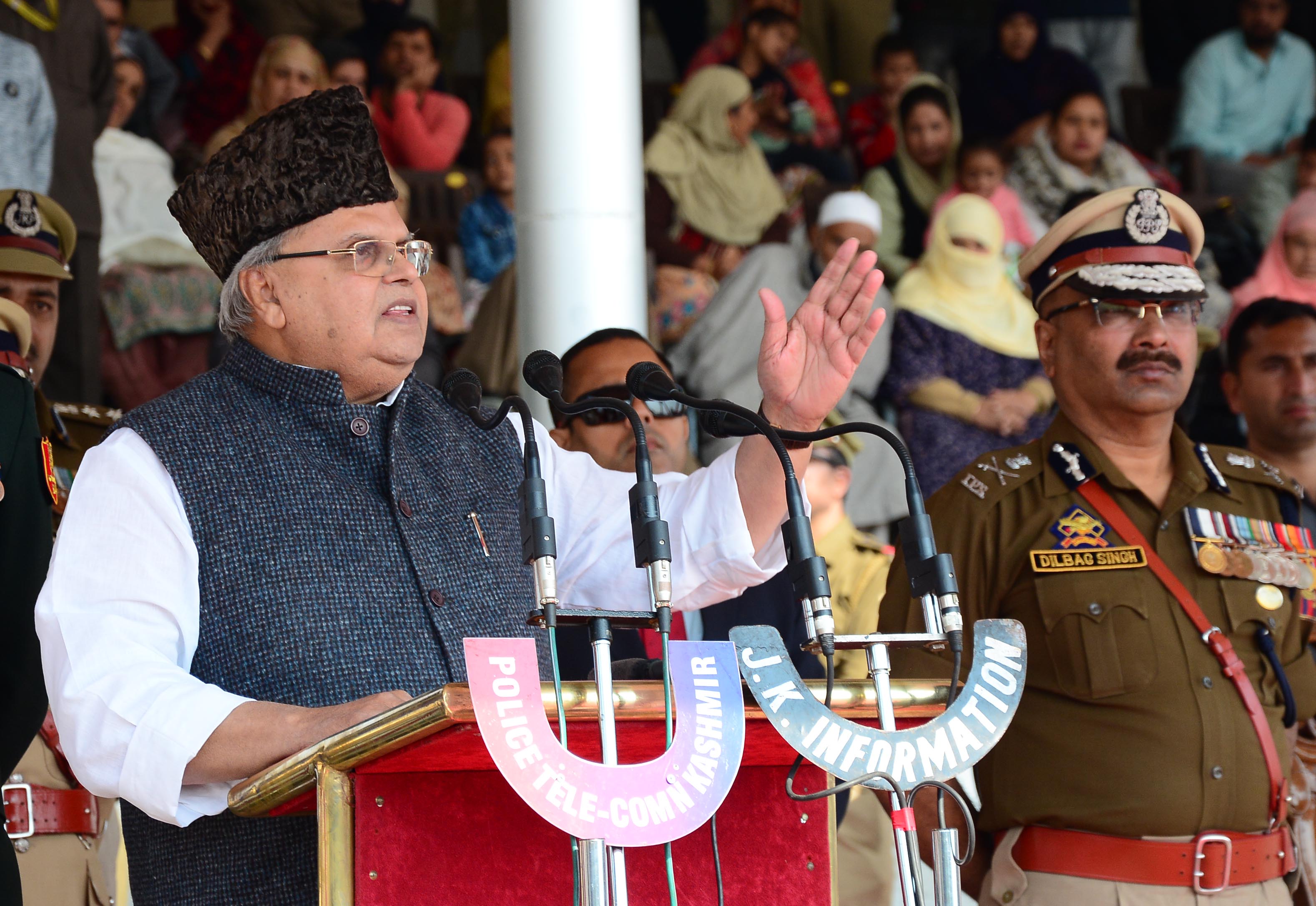 Lauds role of JKP in fighting terrorism over three decades

SRINAGAR, OCTOBER 21:   On the occasion of Police Commemoration Day, which was observed at the Armed Police Headquarters at Zewan, near here today, GovernorSatya Pal Malik paid rich tributes to the martyrs of Police and para-military forces from across the country, including Jammu and Kashmir Police for sacrificing their lives while serving the nation.

Remembering the supreme sacrifice of 292 security force personnel of different States, including 30 officers and jawans of Jammu and Kashmir Police, who laid down their lives for the nation during the past one year, the Governor said that the country is indebted to all these martyrs and will always remember their sacrifices for upholding the rule of law and ensuring safety and security of the people. He lauded the role of Jammu and Kashmir Police in countering terrorism for the past over three decades and said that Jammu & Kashmir Police is among the best disciplined police forces in the country and has always exhibited a high standard of professionalism.

Maintaining that Government is aware of the multiple problems being faced by the J&K Police, the Governor said that the force is working in the most difficult circumstances fighting terrorism in Jammu and Kashmir. He said Government will pay special attention to their all issues and take more steps for ensuring their welfare, including enhancement of compensation to the families of martyrs, incentives to the SPOs etc.

Expressing solidarity with the families of the martyrs, the Governor observed that the administration will attend to their problems on priority and ensure that benefits of all welfare schemes percolate to them without any kind of delay. He called upon the DGP, J&K and Deputy Commissioners of all districts to promptly attend to the issues of families of martyrs, particularly those related to the rehabilitation and education of their children on priority so that they may not face any inconvenience.

The Governor also visited the Blood Donation Camp, organized by the Police Hospital on the occasion and interacted with the donors. He was apprised that such blood donation camps are frequently organized at different places where police personnel voluntarily donate blood. In today’s camp over 200 Units of blood was donated.

On the occasion, a Roll of Honour was presented by the contingents of Police, CRPF, SSB in the memory of those policemen who were martyred during the past one year. The Governor also laid floral wreath at the Martyrs’ Memorial along with other dignitaries.

DGP, Shri Dilbag Singh also paid respectful homage to the martyrs of JKP and other para-military forces who laid down their lives in the service of the nation. He said that country will remember them forever and this important day reminds us the sacrifices of our brave soldiers who lay down their lives fighting terrorism for the unity and integrity of the nation. “We salute their courage and valour with which they fought the menace of militancy and offered their sacrifices for the secure future of our coming generations. We also salute to the families of the martyrs and express our sympathies with them” the DGP asserted.

He expressed gratitude to the Prime Minister and Governor for taking various initiatives for the Police force like enhancement of compensation, risk allowance and other welfare measures for the families of the martyrs which will further boost the morale of the force and encourage them to serve with more courage and dedication.