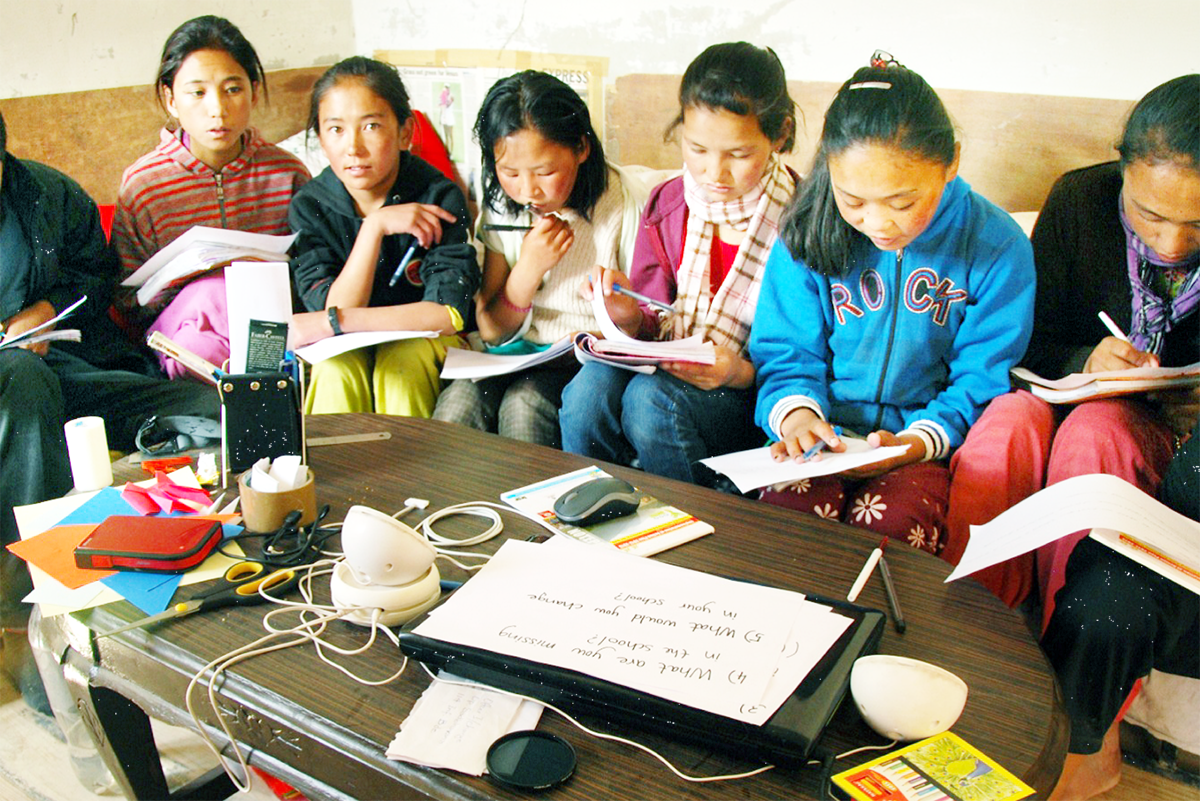 Tsewang Lamo
As far as we have seen there is no discrimination between girls and boys in Leh. There are equal opportunities for both boys and girls in Leh as compared to the rest of the country.
Nowadays women’s education is being given a lot of stress by the government because women have equal participation in government jobs or in any other field. In the past girls were not being given equal rights. In some instances they were not allowed to go out from their homes and therefore there was no chance of education for girls, but nowadays women have full right to acquire a good education. There are even schemes launched by the government like ‘Beti bachao, beti padao abhiyan’.
The Prime Minister, Narendra Modi launched a campaign dedicated to the girl child on January 22nd 2015 in Panipat, Haryana called ‘Beti bachao, beti padao abhiyan’. The main objective of this campaign included the elimination of female feticide. Increasing the level of girl child literacy as well as providing education for all girls. Through such a scheme they can get support from the government
Thiles Lotus, 39, a Professor of Political Science from Lalok village of Phobrang Block when asked about the system and level of women’s education in Leh, replied saying, “Women’s education in Leh is better in comparison to some backward districts of India. In Leh both the boys and girls are being treated alike. That is why the women of Leh are posted in every field and even at the top posts. Many girls from Leh are pursuing further studies across India in different fields. They are not far behind the men. In some fields they are doing better than the men. The unbiased work culture in favour of the girl child is the prime reason behind this achievement. The future of education of women in Leh seems to be better and is a good opportunity for the coming generations of girl children.”
Deachen Angmo, 22, a student of Elizer Jordan Memorial (EJM) College belonging to Phobrang village on being asked why she was interested in studying further, replied saying, “Education is very important in our life. Now I am pursuing graduation from EJM College, Leh because nowadays it is very difficult to spend our life without a proper education. My main objective is to study and become a good, knowledgeable and more valuable person in society. I am very happy that I have good facilities at my college in Leh.”
Phuntrog Palmo, 19, a student of EJM College Leh was asked what were her thoughts about the opportunities girls got in sports and whether girls were encouraged to play sports or not. In response she said, “Leh is a very isolated place. It is part of the state of Jammu and Kashmir. The education system in Leh is very open. Here people give a lot of importance to the education of the girl child. Every girl is allowed to go to school and get a good education so that women are abreast with men in each and every field. Girls get equal opportunities to participate in various sporting events. There are many renowned women from Leh who have received both national and international awards in various fields. They have made different records in scaling the Mt. Everest, in marathons, archery, Ice-hockey, etc. There are many women officers who are working in many fields successfully.”
Leh has been fortunate to have many women who have been achievers in their respective fields.
Gyamo Diskit Wangmo was elected as the first woman Member of Parliament from Ladakh in 6th Lok Sabha from 1977-80.
Prof. Tadzin Joldan has worked in the Government Higher Education Department, J&K for almost thirty-five years. She is the first women lecturer and principal of a college from Ladakh.
Rigzin Angmo is a second in command CRPF officer honoured among the 13 role models of the J&K state by the Governor on 26 January 2019. She was a Gold medalist in Kuala Lumpur international marathon in 1994, Kathmandu International Marathon in 1995, Bangkok International Marathon 1995.
Ovessa Iqbal is the first Muslim girl in the J&K state to crack All India Civil Services exam. She joined Indian Foreign Service in 2011. She had also qualified the Kashmir Administrative Service examination in 2009. At present, she is posted as Under Secretary in the Ministry of External Affairs, New Delhi.
Dr. Tsering Landol is the first woman Gynaecologist from Ladakh. She received the Padma Shri award in the field of medicine in the year 2006 for her contribution to Indian medicine.
Thinles Chorol is Ladakh’s first professionally trained female trekking guide. She started Ladakhi women’s travel agency and won “Women Transforming India” award along with 14 female entrepreneurs from India. In 2007, she was awarded Sanjoy Ghose Ladakh Women Writers award by Charkha Development Communication Network.
These are just a few examples of the many women who have achieved great heights from Leh, Ladakh.
As a girl from Leh, I can say that I am very, very happy with the facilities and the opportunities that are given to girls from Leh to progress in the fields of their choice. There are no restrictions, in fact there is always encouragement to do better and achieve greater heights. There are more and more avenues being opened out for women to explore. These are certainly good times for the girls and women of Leh and I am sure that they will continue to improve. (Charkha Features)