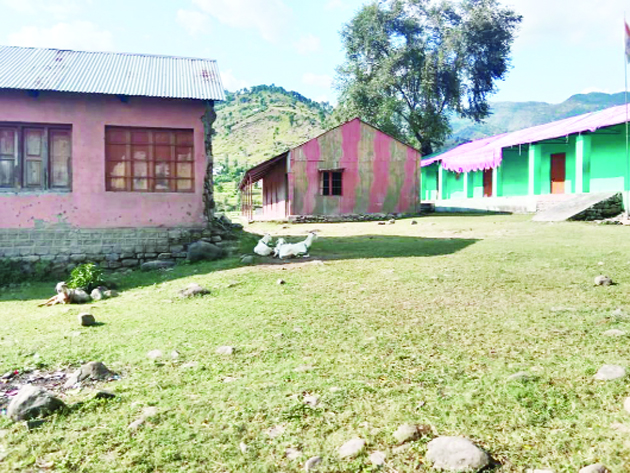 RukhsarKousar
‘Our school has almost everything – eight classrooms, an office for staff and a separate kitchen. Sports equipment are available for students while the lab is equipped with four working computers. It won’t be wrong to say that our school offers a good infrastructure yet we avoid coming to school as there is no boundary wall,” shared Fozia, a Class 8 student from Government Girls Middle School, Chhatral, Mendhartehsil in Jammu and Kashmir.Fozia shared that as the school is located on the roadside, the constant traffic movement doesn’t allow them to concentrate. “We also do not like the way drivers and passengers stare at us. We feel quite unsafe,” she added.
Built in 1968 as a primary school, the school was upgraded to a middle school in 2005. Situated approximately 8 kms from Mendhar, the school has a total of 100 students. Every year, several students enrol in this school, but only fifty percent attend the school regularly, informed Nazarat Mir, one of the teachers from the school. “Most of the girls don’t show up due to safety concerns. Without any boundary, strangers come near the classroom without any permission,” he added.
According tothe National Family Health Survey-5 (2019-21),at least 2% of girls dropped out of school due to safety concerns and 1. 7% did so because there were no proper school facilities for girls. It is crucial for girls to have access to proper facilities in schools as they already have to overcome several challenges to make it to the schools in the first place in this geographically difficult and conflict region. Being a girl, they have the onus of completing household chores before and after school, walk long distances on serpentine trails, face extreme weather condition and a lot more to access their right to education. A compromise on safety and security due to absence of compound walls, can further increase the dropout rate among girls.
After the girl’s dropout, several parents make them sit at home till they turn 18 while others, force them into marriage even before they turn 18. According to a UNICEF report, every year more than 1.5 million girls in India are married before turning 18. Parents already fear harassment and violence against girls and prefer not to send girls to school. In this particular case, the absence of a boundary wall in school has aggravated the fears and concerns of parents of these girls.
Shabnam Ara, another student of Class 8 from the school, expressed the discomfort of attending school during the winters. “As it is really cold, all of us sit outside in the sun during the winter. Although we need the sun, I feel ashamed as there is no wall. It is very uncomfortable to be stared at by the strangers,” shared Shabnam.
The absence of the boundary wall has not only restricted the mobility of the girls within the school but also their participation in their favourite sports. “I like playing Kho Kho, football, and kabaddi, but I feel uncomfortable playing at the school ground because it’s right in front of the bus stand and there is no privacy to play freely,” shared Noreen Kousar, a student of Class 7.
The teachers of the school feel equally troubled. According to Safeer Ahmed, apart from teaching every morning, they also have to clean the cow dung, who take shelter in the school premises due to the absence of a boundary. As the school has been functioning without a headmaster for the last five months, there is no one to pay heed to the problems faced by the girls and their teachers.
According to Muhammad Latief Choudhary, the Deputy CEO of the Education Department at Poonch, “The building of middle school infrastructure is covered under the Samagra Sikhsha Scheme. The applications received regarding infrastructure improvement from schools are sanctioned under this scheme through the ZEO (Zonal Education Officer) and are handed over to the DPO (District Planning Officer). We had built the boundary wall of the Government Girls Middle School in Chhatral, but we were informed that during the monsoon, the river next to the school washed away the boundary. I have not received any formal application from the school so far. I will visit the school as soon as we receive any application from their end.”
Poonch has a total of 1495 government schools. The female literacy rate here stands at 53.19%, way less than the male literacy rate, which is 78.84%. Clearly, reasons like poor infrastructure,lack of clean washrooms, and the absence of safe spaces lead to girls dropping out of schools. There is an urgent need to improve the system to ensure no girl has to drop out because of infrastructural challenges.
(The author is an advocate and a rural writer from border district Poonch in Jammu and Kashmir.) Charkha Features