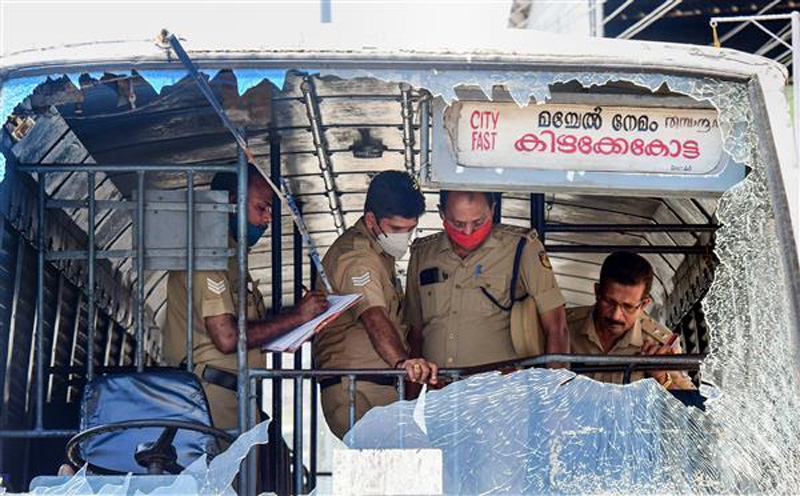 Thiruvananthapuram/Guwahati/Pune, Sep 24: Kerala Chief Minister Pinarayi Vijayan on Saturday said the violence during the PFI-sponsored hartal in his state was “pre-meditated” and assured strict action against the culprits while his Assam counterpart Hemanta Biswas Sarma batted for banning the islamist outfit, whom the NIA accused of encouraging youth to join terrorist groups including the Lashkar-e-Taiba (LeT).
In Maharashtra’s Pune, “Pakistan Zindabad” slogans during a PFI protest drew the ire of the BJP, with a party MLA warning those who raised such slogans would not be spared.
Days after the National Investigation Agency-led a mult-agency pan India raids against the Popular Front of India (PFI) for its alleged support to terror related activities, it said the documents seized during the nation-wide raids conducted at the outfit’s offices and its leaders contain highly incriminating materials targeting prominent leaders of a particular community.
In a remand report submitted before the NIA special court here seeking custody of 10 people in connection with a case registered here, the agency alleged the radical Islamist outfit encouraged youth to join terrorist groups including LeT and Islamic State of Iraq and Syria (ISIS).
It said the PFI spreads “dis-affection against India by wrongful interpretation of government policies to the particular section of people” to create hatred against the state and its machineries.
“During the investigation, based on materials collected, it has been disclosed that the accused named in the FIR were actively involved in the organised crimes and unlawful activities repeatedly, to terrorise other religious sections of the society, besides creating fear in the mind of general public based on the larger conspiracy hatched among themselves and others,” the report said.
“The seized documents also contain highly incriminating materials related to targeting of prominent leaders of a particular community. The Hit List seized clearly shows that the PFI, which is working through its leaders, members and associated have gone far ahead in creating atrocities among the community,” the report said.
With the state witnessing violence on Friday during the hartal called for by the PFI and being criticised by the BJP for the state government being “equally responsible,” Kerala CM Vijayan said strict action will be taken against the culprits behind the incidents.
“In yesterday’s hartal, led by the PFI, Kerala witnessed a pre-meditated violence. The state witnessed an organised and violent interference from their part resulting in huge loss to the state,” Vijayan said.
The Chief Minister said it was an attempt to destroy the peaceful atmosphere of the state and that the culprits will not be spared.
Senior BJP leader Prakash Javadekar lashed out at the ruling CPI (M) over the violence during the Friday protest, wondering why only Kerala witnessed such unruly scenes although PFI was raided across the country.
“Yesterday was a dark day in Kerala because people suffered throughout the state. The PFI was engaged in violence and attacked the bus travellers. We condemn the barbaric attack by PFI and they also bombed the RSS office in Kannur. This is never seen before,” Javadekar said.
He charged the violence was planned.
“The left front Government is answerable. In 15 states raids were carried out against PFI offices. But only in Kerala violence happened. So the LDF government is equally responsible for the violence committed in Kerala yesterday,” he said, adding “we are seeing complete lawlessness” in the southern state.
Assam CM Sarma said his Government was convinced PFI needs to be banned and that it has been consistently requesting the Centre to take action against the outfit for allegedly “creating an eco-system for terror activities”.
“The Assam Government is consistently asking the Centre to ban the PFI…. We are convinced that the organisation needs to be banned,” Sarma said on the sidelines of a programme in Guwahati.
He added the police are investigating whether there are links among the outfit and the radicalisation modules in some madrasas busted by the law enforcement agencies since March this year.
“We have intelligence inputs that the PFI has created an ecosystem that encourages some people to join the radicalisation modules sponsored by the ISIS and Al Qaeda in Indian Subcontinent (AQIS),” Sarma said.
In the western city of Pune, a video showing a group of people shouting ‘Pakistan Zindabad’ during a PFI protest went viral.
The city police said they were looking into the matter.
The PFI had organised the agitation outside the district collector office in Pune city on Friday to denounce the recent raids on the organisation and the arrest of its activists.
The video of “Pakistan Zindabad” slogans being raised when the protesters were taken into custody and made to sit in a police vehicle, went viral on social media.
“We have already registered a case against the PFI members for unlawful assembly and we are looking into the slogans matter,” said Sagar Patil, Deputy Commissioner of Police.
Responding, BJP MLA Nitesh Rane said those who raised pro-Pakistan slogans should remember that they will not be spared. He also demanded a ban on the PFI.
“To all those shouting Pakistan Zindabad slogans in support of PFI in Pune.. Chun chun ke marenge.. Itna yaad rakana!!! #BanPfi,” he said.
Another BJP MLA Ram Satpute sought strict action against those who raised slogans, and said the Pune police should arrest them.
In a massive crackdown on the PFI, multi-agency teams spearheaded by the NIA had, on Thursday, arrested 106 leaders and activists of the radical Islamic outfit in near-simultaneous raids in 15 states for allegedly supporting terror activities in the country.
The PFI, formed in 2006, claims to strive for a neo-social movement ostensibly for the empowerment of marginalised sections of India, and is often accused by law enforcement agencies of promoting radical Islam. (PTI)