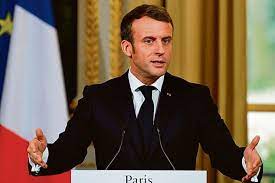 Jerusalem, July 25: French President Emmanuel Macron has spoken to Israeli Prime Minister Naftali Bennett on reports that Morocco’s security forces may have used the Pegasus spyware to snoop on his cellphones, according to a media report.
A global media consortium last week reported that 50,000 cellphone numbers were being spied on using the Pegasus malware, which has been developed by Israeli cybersecurity company NSO Group. The mobile phones of French President Macron and 15 members of his government may have been among potential targets, according to a member of the media consortium.
Macron telephoned Bennett on Thursday and asked him to ensure that “the issue was being taken seriously”, Israel’s Channel 12 reported on Saturday evening.
The Israeli prime minister said that the allegations are from a period when he had not assumed office but assured that the required conclusions on the matter will be reached upon.
Macron had called an urgent national security meeting on Thursday to discuss the Pegasus spyware after reports about its misuse in France emerged.
The Moroccan government has denied reports that the country’s security forces used the spyware to eavesdrop on the French president. Similarly, the NSO Group has denied that the French President was targeted.
We can “specifically come out and say for sure that the President of France, Macron, was not a target,” Chaim Gelfand, Chief Compliance Officer at NSO Group, told Israeli television network i24news on Wednesday.
A source close to Macron played down the risks, saying that the French leader had several phones which were “regularly changed, updated and secured”.
Israel on Thursday established a committee to review the allegations of misuse of the NSO group’s surveillance software and hinted at a possible “review of the whole matter of giving licences”.
“The defence establishment appointed a review committee made up of a number of bodies,” lawmaker Ram Ben-Barak, the head of Knesset’s Foreign Affairs and Defence Committee, told Army Radio on Thursday.
“When they finish their review, we’ll demand to see the results and assess whether we need to make corrections,” Ben-Barak, who earlier served as deputy head of Israel’s Mossad spy agency, added.
Israel’s priority was “to review this whole matter of giving licenses”, he stressed.
NSO’s chief executive, Shalev Hulio, welcomed the move, telling Army Radio that he would “be very pleased if there were an investigation so that we’d be able to clear our name”.
Hulio claimed that there was an effort “to smear the whole Israeli cyber industry”.
Ben-Barak noted that Pegasus had helped “expose many terror cells”, but “if it was misused or sold to irresponsible bodies, this is something we need to check”.
The NSO head also told the Radio that his company could not disclose the details of its contracts due to “issues of confidentiality,” but said “he would offer full transparency to any government seeking more details”.
“Let any state entity come along — any official from any state — and I’ll be prepared to open everything up to them, for them to enter, to dig around from top to bottom,” Hulio asserted. (PTI)