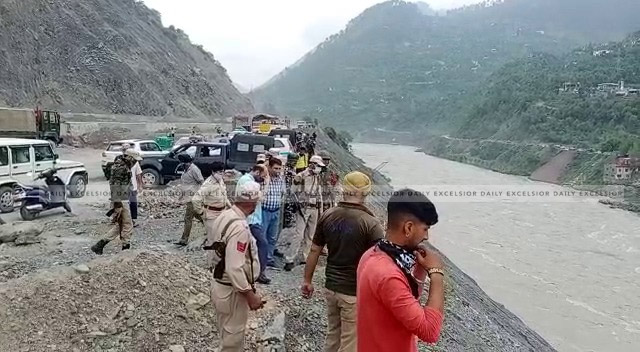 RAMBAN: Five persons including four of a family are feared killed and 12 injured in two separate road accidents in Ramban district of Jammu and Kashmir.
Senior Superintendent of Police Ramban, P D Nitya said that an information was received that one Swift Car, driven by Rakesh Kumar of Paloura, Jammu along with his wife Asha Rani and sons, Sachit Bhagat and Mehul Bhagat, travelling from Srinagar to Jammu, met with an accident near Mehar in Ramban district.
“As per eye witnesses, the driver suddenly lost control and could not stop due to which the car plunged into the river.
Search and rescue operations are underway by teams of District police, QRT and DRF.
“Till now no clue of the passengers and vehicle has been found,” said the officer.
Meanwhile in another incident in the morning, one person was killed and 12 injured when a truck collided with tempo along Jammu-Srinagar national highway in Ramban district.
The SSP said that an information was received that a truck driven by Kabir Ahmed Khan, son of Mohammad Hussain Khan, resident of Rafiabad, Baramulla was on its way from Srinagar towards Jammu and when it reached at Chamalwas Khatana Basti at around 0609 hours lost control and collided with Tempo, which was on its way towards Srinagar.
“The accident resulted in injuries to the passengers travelling in tempo who were labourers from Bijnore,” said the SSP.
She said that one Sajid Ahmed, 37, son of Qayoom was referred to GMC Anantnag but later succumbed.
The injured were identified as (driver), Karanjeet Singh, 40, Gajinder Singh, 45, Mohammad Ayooub, 39, Satish Kumar, 39, Nazir Ahmed, 27, Shah Nawaz, 28, Omesh, 24, Akshay, 20, Mohammad Anwar, 35 and Tahir Ahmed, 36.
A case has been registered and investigations taken up, police added. (Agencies)