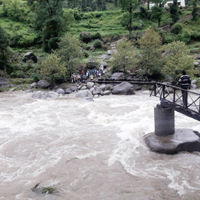 Gopal Sharma
JAMMU/Srinagar, June 29: While the authorities have sounded alert in Kashmir after flooded Jhelum crossed danger mark today, the Jammu-Srinagar National Highway, Batote- Kishtwar and Mughal Road were closed after fresh landslides this morning, while many rivers and nallahs were flooded due to continuous rain in many parts of the region for the last two days, whereas, chopper service to Mata Vaishnodevi shrine remained suspended due to bad weather.
Click here to watch video
River Tawi and Chenab were over flooded today and it made authorities to sound alert in the low lying areas of Jammu district. The flooded nallahs disrupted movement of traffic at several places across the region.