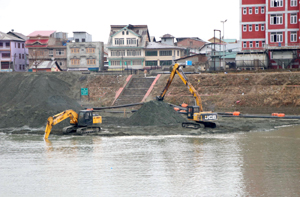 Srinagar, Apr 15:  After facing criticism on the progress of work, the Department of Irrigation and Flood Control (I& FC) has asked the Kolkata based dredging firm to wind up operations here after it failed to the meet the 31st March deadline.
After September 2014 devastating floods, to carry the first phase of dredging work on River Jhelum the government hired a Kolkata-based Reach Dredging Limited to clear the excessive siltation that had accumulated and drastically reduced the carrying-capacity of River Jhelum. However, the company has failed to complete the project on time and after missing several deadlines the Irrigation and Flood control has asked it to wind up its operation here. The department claims that nearly 75 percent of the dredging is complete and fresh tenders would be issued for the pending work. “The contract has ended on 31st of March and the company has been asked to wind up operations here. The project would have been completed but the water level remained low for last one-two years and that hindered the process,” Axon irrigation and flood control Srinagar, Sartaj Singh, said.
Echoing him the Chief Executive Engineer I&FC, Shahnawaz Ahmad, when contacted, said: ” New estimates will be taken up soon for the pending work.”
The drudging of the river Jhelum was to be carried in two phases and phase-I of the project was initiated in North and central Kashmir.  For Bell Mouth to Panjinara stretch in Srinagar, the deadline for completing the first phase of dredging was January 2017 but the government extended the deadline to December 2017 due to 2016 unrest. And for Sopore to Baramulla stretch, the deadline for completing the first phase of dredging was September 2017. As the company failed to meet the target the March 31st was kept as the final deadline for the project and the company failed to meet that as well.
As per the experts, the river Jhelum at its peak could hold more than 30000 cusecs of water and due to the accumulation of silt for many years the carrying capacity had reduced to mere 10000 to 15000 cusecs.
Out of the total 16.15 lakh cubic meters of silt in the river, only 12.35 lakh cubic meters, a little over 76 percent, have been dredged so far, as per the figures of the department of I&FC.
Of the allocated work of dredging around 8 lakh cubic metres from, Shivpora to Panjinara in Srinagar, almost 6 lakh cubic metres have been dredged so far, the department claims.
In Sopore reach, 3.97 lakh cubic meters were drudged out of 4.5 Lakh cubic meters.  “We have completed the Sopore reach,” Chief Executive Engineer Baramulla, Ghulam Mohammad Ganai, said.
He added in Baramulla out of 5.10 lakh cubic meters only 2.43 cubic meters, nearly 55-60 percent dredging has been completed. “The dredging could not be completed because of sliding. Near Khanpora bridges in Baramulla sliding of embankments took place. There was also a Hindu temple on the river edge that could have collapsed if the department had continued.  The road towards Khanpora- Uri was also in danger,” he said, adding there was also unavailability of dikes at several places and that equally dented the process.
The dredging work of the flood spill channel is also incomplete and the department claimed that nearly 40-45 percent work has been completed. Out of the allotted 18 lakh cubic meters of dredging only 7 lakh cubic meters have been dredged so far, the department claims. However, the officials at I&FC said that the important part of the project was the construction of embankments on the flood spill channel and that has been already completed. “The flood embankments from Tangpora to Hokersar has been completed and that will save the low lying areas of Srinagar. The areas around Bemina in the outskirts of Srinagar were mostly affected by flood as there were no embankments around that area,” an official said, adding it will, however, put an extra pressure of 25000 cusecs on the Wullar lake where the water finally enters.