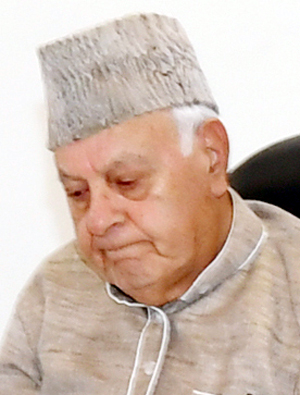 Srinagar, Apr 15: Member of Parliament and NC president Dr Farooq Abdullah today urged Chief Minister Mehbooba Mufti to make a law in which hanging will serve punishment to those involved in child rape cases.
Abdullah’s reaction was in reference to Kathua minor rape and murder case during a meeting of the Party’s Provincial Committee for Kashmir Province at Party Headquarters, ‘Nawa-e-Subha’ in Srinagar today. “After all she was an eight year old girl. She is just like my daughter…thank God! today nation has waked up. And they have taken it very seriously. I hope justice will be done,” said Farooq.
Abdullah said Mehbooba should call a Special Assembly session to bring a bill in Assembly which will be passed by the members so that these crimes are not repeated in future. “…hanging must be brought in. The capital punishment has to be brought to those people,” he said.
“Why she shouldn’t do it now? Let her Government take a decision on this and call a special session of the Assembly just for this sake. And if a special session of Assembly is called, this bill will be passed. In future, such crimes will not take place,” he said.
Abdullah said that nomadic girl’s rape and murder was not an isolated, spontaneous crime but the manifestation of a deeply repugnant and repressive politics that hinges on the harassment, intimidation and disempowerment of the nomadic Gujjar-Bakerwal communities.
“The hardworking, peaceful and harmonious Gujjar Bakerwal communities have been at the receiving end of threats and intimidation ever since the present political dispensation came to power. Ministers of this Government openly threatened the Gujjar Bakerwal community of dire repercussions and one such Minister went to the extent of reminding them of the horrors of the 1947 massacre. The Gujjar Bakerwal communities have been hounded, targeted and intimidated for nearly three years now while PDP has remained a mute spectator. Had the PDP objected to this harassment and intimidation, perhaps things would not have come to this tragic pass. The Chief Minister’s silence over repeated attempts to harass and threaten the Gujjar Bakerwal communities emboldened these elements and the consequences are here for all of us to see”, the NC president told the meeting.
“The PDP-BJP Alliance has left no stone unturned to divide the people of the State along regional and religious lines to seek their own specific political dividends. While the BJP continues to pit the people of Jammu against their brothers and sisters in Kashmir as a deeply divisive and dangerous political strategy, the PDP in Kashmir sought votes against the BJP before aligning with it post elections – eroding the sanctity of its mandate and pushing our youth towards turmoil and disenchantment. The ramifications of this opportunism – of this brazen sellout have been disastrous. Today the fault lines between various regions of our State have become deeper than they ever where as shrill, polarizing rhetoric has changed the narrative into an ‘us versus them’ debate in respective regions of the State. This is a very dangerous trend and the slide needs to be checked immediately before it’s too late and the situation becomes irretrievable”, he said.
The National Conference president expressed serious concern over the deteriorating law and order scenario in the State and said the unabated spate of civilian killings was pushing the youth towards a path of unimaginable anger and hostility. “We are deeply concerned at the spate of unabated civilian killings in the Valley and at the Government’s shocking abdication of responsibility to prevent these killings. The State Government cannot blame the dead for dying. The Chief Minister should introspect and listen to some rare calls of conscience in her own party – including that of her brother, Tassaduq Mufti who recently said the PDP and the BJP were ‘partners in crime”, he added.
“I also implore all of you to continue playing a constructive role in blunting the edge of a communal narrative and a divisive politics that threatens our State’s amity and brotherhood. Each one of us should rebuild the bridges of trust and mutual brotherhood between the three regions of the State and swear by the integrity and unity of Jammu and Kashmir. Those trying to divide the State by poisoning people of one region against the other are playing with fire and will never succeed in their ulterior motives”, the National Conference president said.
And in the meantime, former Chief Minister and leader of Opposition, Omar Abdullah today questioned BJP legislator Lal Singh’s assertion that he had participated in the rally organized by Hindu Ekta Manch in favour of accused in Kathua minor rape and murder case to defuse tension.
“I don’t understand how inciting the local people to protest & how threatening the police against making any arrests was meant “to defuse tension”, Omar said in his reaction on social networking website twitter.