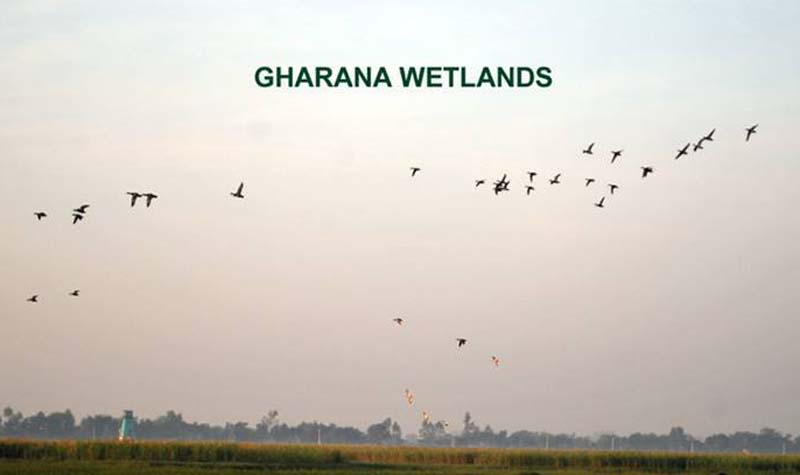 JAMMU, Dec 2: With land acquisition proceedings being finalized at a rapid pace by the Jammu district administration, the Department of Wildlife Protection will start execution of 5-years management plan of famous Gharana Wetland along the International Border with Pakistan in R S Pura tehsil within next few months in order to attract more tourists and bird lovers.
The fast pace shrinking of Gharana Wetland hogged limelight when a Public Interest Litigation (PIL) was filed in the High Court seeking various directions for restoration of pristine glory of the water body, which is abode for unimaginable number of bird species from different parts of world particularly Siberia.
In the PIL, the Division Bench of the High Court issued directions for acquisition of land to restore the original area of the wetland after the counsels for the petitioner as well as Government advocates fairly admitted that acquisition of land in the vicinity of wetland was the only option to restore its original area.
After the long drawn exercise, the proceedings for acquisition of 415 kanals of land in the vicinity of wetland are being finalized by the Jammu district administration at a rapid pace as sufficient money to be given to the land owners has already been made available by the Wildlife Protection Department, official sources told EXCELSIOR.
“All the procedural formalities have been finalized and process of taking possession of land after giving compensation to the land owners has already been started”, they said, adding “entire exercise in respect of 415 kanals of land will be completed by the end of this month of early next month and this will pave the way for execution of 5-year management plan prepared by the Wildlife Protection Department”.
The main components of the management plan are establishment of Sewage Treatment Plant (STP), construction of embankment, water bore wells, habitat improvement, sluice gates to control water level, approach road with parking, view points, chain-link fence along the residential areas, education and awareness, research survey and census and eco-development activities.
When contacted, Chief Wildlife Warden J&K Suresh Kumar Gupta confirmed that department was ready to start executing the management plan, adding “we will construct new approach road to the Gharana Wetland as the existing one is very congested and tourists are facing difficulties in reaching the area. Moreover, we have decided to establish STP so as to treat the waste water from the village before allowing it to enter the wetland”.
A bandh along with viewpoints will be raised on the sides of the wetland so that tourists and bird lovers can easily and comfortable watch the activities of unimaginable number of bird species from different parts of world particularly Siberia, he said while disclosing that Gharana is the only international bird area in the world where one can see Bar-headed goose from such a short distance.
“We will also install sluice gates and submersible water pumps so as to maintain the water level of wetland, which is imperative to prolong the stay of the birds. Moreover, in order to make the wetland more attractive the department will install adequate perches for the birds”, the Director informed, adding “we have also decided to upgrade the observatory, which is already functional at the building of the Wildlife Department adjacent the Gharana Wetland”.
The operation of the parking area, souvenir shop(s), kiosks and other amenities which will be created for the convenience of the tourists will be the responsibility of a committee of the villagers to be constituted at the later stage.
It is pertinent to mention here that the land which is being acquired was originally the area of Gharana Wetland Reserve but it was converted into agriculture land long time back under the well-knit conspiracy and due to the connivance of the officers who otherwise were supposed to foil the designs.
Gharana Wetland Conservation Reserve was notified in 1981 and is home to more than 150 species of birds. During the winter, the wetland is visited by thousands of birds from Central Asia and some of the migratory bird species visiting this wetland are endangered.