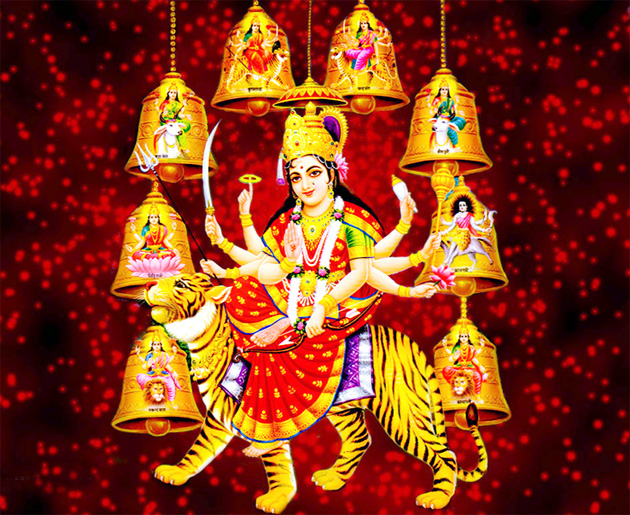 The festival of Navratri (nav = nine and ratri = nights) lasts for 9 days with three days each devoted to worship of Maa Durga, the Goddess of Valor, Ma Lakshmi, the Goddess of Wealth and Maa Saraswati, the Goddess of Knowledge. During the nine days of Navratri, feasting and fasting take precedence over all normal daily activities amongst the Hindus. Evenings give rise to the religious dances in order to worhip Goddess Durga Maa.
The 9 nights festival of Navratri begins on the first day of Ashwina of the bright fortnight. Seeds are sown, sprouting is watched, the planets are consecrated, and on the 8th and 9th days, Goddess Durga, Vijayashtami and Mahanavami are worshipped. The Devi Mahatmya and other texts invoking the Goddess who vanquished demons are cited.
1st – 3rd day of Navratri  On the first day of the Navaratras, a small bed of mud is prepared in the puja room and barley seeds are sown on it. These initial days are dedicated to Durga Maa, the Goddess of power and energy.
4th – 6th day of Navratri  During these days, Lakshmi Maa, the Goddess of peace and prosperity is worshipped.
7th – 8th day of Navratri  These final days belong to Saraswati Maa who is worshipped to acquire the spiritual knowledge. This in turn will free us from all earthly bondage. But on the 8th day of this colourful festival, yagna (holy fire) is performed.
Mahanavami The festival of Navratri culminates in Mahanavami. On this day Kanya Puja is performed. Nine young girls representing the nine forms of Goddess Durga are worshiped.
History & Origin Of Navratri
In different parts of India, different legends describe the history of Navratri:
North India
The legend in North India goes that Mahishasura, the mighty demon, worshipped Lord Shiva and obtained the power of eternity. Soon, he started killing and harassing innocent people and set out to win all the three lokas. The gods in swargaloka appealed to Lord Shiva, to find a way to get rid of the demon. To protect the world from the atrocities of Mahishasura, the Trinity of Brahma, Vishnu and Shiva united their powers and created a divine female warrior, known as Goddess Durga. Mahishasura, when he saw the divine beauty of Goddess Durga, got mesmerized.
So fascinated was Mahishasura by Goddess Durga’s beauty that he approached her with the intention of marriage. The goddess agreed to marry him, but put forth a condition – Mahishasura would have to win over her in a battle. Mahishasura, proud as he was, agreed immediately! The battle continued for 9 nights and at the end of the ninth night, Goddess Durga beheaded Mahishasura. The nine nights came to be known as Navratri, while the tenth day was called Vijayadashmi, the tenth day that brought the triumph of good over evil.
Eastern Belief
As per the legend prevalent in East India, Daksha, the king of the Himalayas, had a beautiful and virtuous daughter called Uma. She wished to marry Lord Shiva, since her childhood. In order to win over the Lord, she worshipped him and managed to please him as well. When Shiva finally came to marry her, the tiger-skin clad groom displeased Daksha and he broke off all the relationships with his daughter and son-in-law. One fine day, Daksha organized a yagna, but did not invite Lord Shiva for the same.
Uma got so angry at her father’s rude behavior, towards her husband, that she decided to end her life by jumping into the agnikund of the yagna, where she was united with eternity (since then, she came to be known as Sati). However, she took re-birth and again won Shiva as her groom and peace was restored. It is believed that since then, Uma comes every year with Ganesh, Kartik, Saraswati and Laxmi and two of her best friends or ‘sakhis’, called Jaya and Bijaya, to visit her parent’s home during Navratri.
Another Legend – Ram and Ravana
Yet another legend of Navratri relates to the Hindu epic Ramayana. It goes that Lord Rama worshipped Goddess Durga in nine aspects, for nine days, in order to gather the strength and power to kill Ravana. He wanted to release Sita from the clutches of powerful demon king Ravana, who had abducted her. Those nine nights became to be known as Navratri and the tenth day, on which Lord Rama killed Ravana, came to be called Vijayadashmi or Dusshera, signifying Rama’s (good) triumph over Ravana (evil).

Durga Shailputri
Daughter of Mountain) “Shail” means mountains, “Putri” means daughter. Parvati, the daughter of the King of the Mountains Himavan, is called ‘Shailputri”. The first among nine Durgas and 1st night of Navratras is devoted to the puja of Shailputri . Her two hands display a trident and a lotus. Her mount is a bull.
Brahamcharini
Brahma that is who observes penance(tapa) and good conduct. Here “Brahma” means “Tapa”. The idol of this Goddess is very gorgeous.One hand hold a “Kumbha” or water pot, and the other holds a rosary. She personifies love and loyalty. Bhramcharini is the store house of knowledge and wisdom. Rudraksha beads are Her most adored ornaments!
Chandraghanta
The name of  third Shakti is Chandraghanta. There is a half-circular moon in her forehead. She is charmful and bright. She is Golden in color, possesses ten hands and 3 eyes. Eight of her hands display weapons while the remaining two are respectively in the mudras of gestures of boon giving and stopping harm. Chandra + Ghanta, meaning supreme bliss and knowledge, showering peace and serenity, like cool breeze in a moonlit night. This Durga Shakti rides a tiger.  She is mainly worshipped in Tamil Nadu.
Kushmanda
With the fourth night begins the worship of Kushmanda, possessed of eight arms, holding a weapons and a mala ( rosary), her mount is the tiger and She emanates a solar aura. “Kumbh Bhand” means to see the cosmic dance in the form of Pindi; the knowledge of cosmic intricacies in the human race. The abode of Kushmanda is Bhimaparvat !
Skanda Mata
Fifth name of Durga is “Skanda Mata”. Rising a lion as Her chosen vehicle, She holds Her son skanda on her lap. She displays three eyes and four hands; two hands holds lotuses while the other two hand display defending and granting mudras, respectively. Its said, by the merch of Skandmata, even the fool becomes an ocean of knowledge.
Kaalratri
Katyayani Once upon a time, a great sage called Kata who underwent long austerities and penance in order to receive the grace of the Mother Goddess. According to his wish and desire the Goddess granted his request. Katyayani was born to Kata as an avatar of Durga.
Kaalratri
Black (or blue ) skin with bountiful hair and 4 hands, 2 clutching a cleaver and a torch, while the remaining 2 are in the mudras of “giving” and “protecting”. Her vehicle is a faithful donkey. The destroyer of darkness and ignorance, Kaalratri is the seventh form of Nav-Durga meaning scourer of darkness; enemy of darkness.
Maha Gauri
The Eighth Durga is “Maha Gauri.” She is as white as a conch, moon and Jasmine. She is of eight years old. With four arms and the fairest complexion of all the Durgas Shaktis, Mahagauri radiates peace and compassion. She is often dressed in a white or green sari. She holds a drum and a trident and is often depiected riding a bull.
Siddhidatri
Ninth Durga is “Siddhidatri”. There are eight Siddhis , they are- Anima, Mahima, Garima, Laghima, Prapti, Prakamya, Iishitva & Vashitva.It is said in “Devipuran” that the Supreme God Shiv got all these Siddhies by worshipping Maha Shakti. With her gratitude the half body of Shiv has became of Goddess and there fore his name “Ardhanarishvar” has became famous.Usually shown ensconced a lotus with four arms, She is the grantor of 26 different wishes to Her Bhaktas.
http://www.rudraksha-ratna.com/navratri.htm 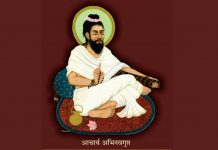