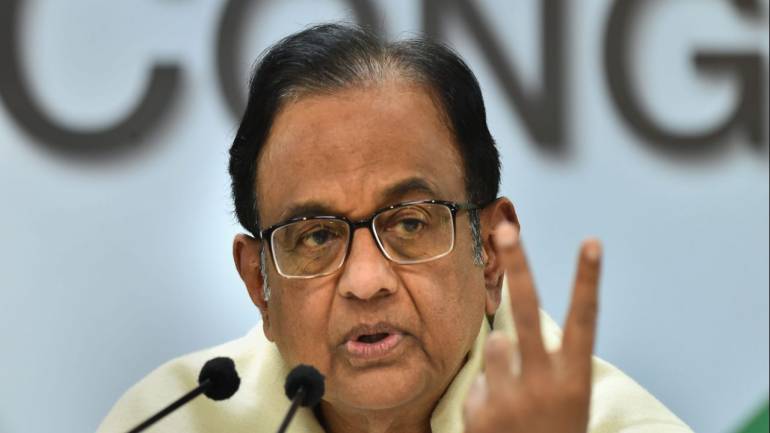 Fear rules the country today and there is a danger that the Constitution will be replaced by a document inspired by Hindutva, claims senior Congress leader P Chidambaram.
The former Union minister of Finance and Home says this scenario will be the end of the ‘idea of India’ given to us by the founding fathers, adding to restore that idea will require nothing less than another freedom struggle and another Mahatma Gandhi.
He makes these comments in his new book “Undaunted: Saving the Idea of India”, a collection of his essays published last year.
According to the Rajya Sabha member, an economy derailed can be put back on the rails and a society divided can be healed and united but one thing cannot be fixed if it is broken, and that is the Constitution and the constitutional values embodied in that document.
At present, every value of the Constitution is under attack – freedom, equality, liberalism, secularism, privacy, scientific temper, etc., he says.
“There is a clear and present danger that the Constitution of India will be replaced by a document that will be inspired by an ideology called Hindutva. That will be the end of the ‘idea of India’ given to us by the founding fathers; and to restore that idea will require nothing less than another freedom struggle and another Mahatma,” he writes in the introduction of the book, brought out by Rupa Publications.
“I have no hesitation in saying that, today, fear rules India. Every individual lives in fear – fear of the neighbour, fear of self-styled moral brigades, fear of the law applied with an evil mind and unequal hand and, above all, fear of the snooping Indian State,” he goes on to say.
For reclaiming freedom, fear must be driven away, he says, adding it is not an easy task, but we cannot give up.
“Average citizens have summoned the courage to push back against a State in by-elections and elections to State legislatures; however, the task is unfinished, and it must be accomplished in the next hundred days. We have to carry on, undaunted, until we complete the task,” he writes. Former Vice President Hamid Ansari has written the book’s foreword in which he talks about the efficacy of institutions and cites few examples.
“If the Budget is passed without scrutiny and debate by the Parliament; and if important pieces of legislation are endorsed without reference to standing committees or select committees, then it is evident that the Parliament as the designated legislative institution is not doing its duty and the government of the day is failing in its primary duty.
“The same holds for several other institutions. Some have imploded, others have faltered on their essential functions. Still others have succumbed to backdoor control. Together they raise doubts in the public mind and undermine the confidence essential in a normal, open, system,” Ansari writes.
He also rues that an ideological deviation, conscious and unabashedly public, undermines the core values of the Constitution, differentiates between citizens on grounds of faith, seeks to impose a single cultural denominator to homogenise a plural society, and undermines secularism and the principle of fraternity.
The essays in the book, which will be launched on Friday, chronicle the events that happened in 2018. They are grouped, subject-wise, into sections and arranged chronologically within each section.
According to Chidambaram, although the BJP considers all Opposition politicians as political enemies, he does not regard the BJP as foe.
He also says that miracles could have been performed with the kind of majority that the BJP got on its own (282) and with its allies (336) in the Lok Sabha elections of 2014.
“Indeed, Mr Narendra Modi started with a bang. If he ends his term with a whimper, he has no one to blame except himself,” Chidambaram writes. (PTI)