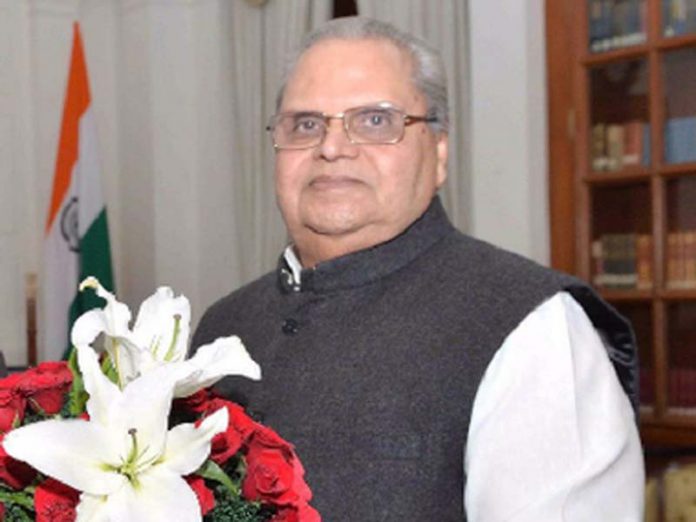 Excelsior Correspondent
JAMMU, Sept 21: Governor Satya Pal Malik said today that there was fear psychosis among the militants as security forces have killed 15 of them this month alone and it was in view of this that they picked up unarmed police personnel, who were not even linked to operations, and killed them.
In an interview to a national news channel, Malik said he can’t say whether there was fear psychosis among the people or not in view of police personnel’s killings but can say it that there was fear psychosis among the militants, who have targeted unarmed police personnel, who were not even linked to the operations.
“The people immediately reacted when the militants were kidnapping the police personnel. They even chased the militants (to secure release of police men) but were fired upon by the militants,” he said and disclosed that security forces have killed 15 militants in the Kashmir valley this month alone, which has rattled the militant cadre.
Describing Jammu and Kashmir Police including the Special Police Officers (SPOs) as a force committed to fight militancy and always in forefront, Malik said Army and Central Reserve Police Force (CRPF) have stated that they can’t fight without Jammu and Kashmir Police, which has been doing commendable job against the militancy.
The Government has recently announced many facilities for the police personnel, he said.
Describing an unfortunate the boycott of Panchayat and Municipal elections in Jammu and Kashmir by two regional political parties including National Conference and People’s Democratic Party (PDP), the Governor pointed out that all the political parties had contested recently held elections to Ladakh Autonomous Hill Development Council (LAHDC), Kargil.
“The political parties have indulged in posturing for MLAs’ elections. Their cadre will contest the election as Independents. There will be more percentage in the elections than what Farooq Abdullah got in (Lok Sabha polls),” he said.
It may be mentioned here that only seven to eight per cent polling was reported in Srinagar-Budgam Lok Sabha seat when Dr Farooq Abdullah had won the election in April 2017.
To a question on celebration of second anniversary of surgical strikes on September 29, Malik said: “Very few operations like surgical strikes have been undertaken in the country. There were very few countries in the world, which can conduct such successful operations,” Malik said, adding that second anniversary of surgical strikes would be observed in the State.
On brutal killing of a Border Security Force (BSF) jawan on the International Border (IB) in Ramgarh sector of Samba district, the Governor said the BSF has been giving very befitting reply to Pakistan.
“The BSF has been causing two to three times damages on Pakistan than what they suffer,” he said, adding that during the past two years, the BSF has never asked for a flag meeting and it was only Pakistan which calls for such meetings, which was an indication of damages suffered by Pakistan,” he said.
Describing the killing of BSF jawan Narender Singh as against “Geneva convention”, Malik said the BSF will revenge the killing. This is for the sure”.
On talks with Pakistan, Malik said this was not his mandate and decision on this can be taken only by the Central Government.
“My mandate is to provide transparent, sensible and good governance to the people. Reaching out to the people is my mandate. Dialogue with the local people is my mandate. This I have already started. You will see the difference soon,” Malik said.