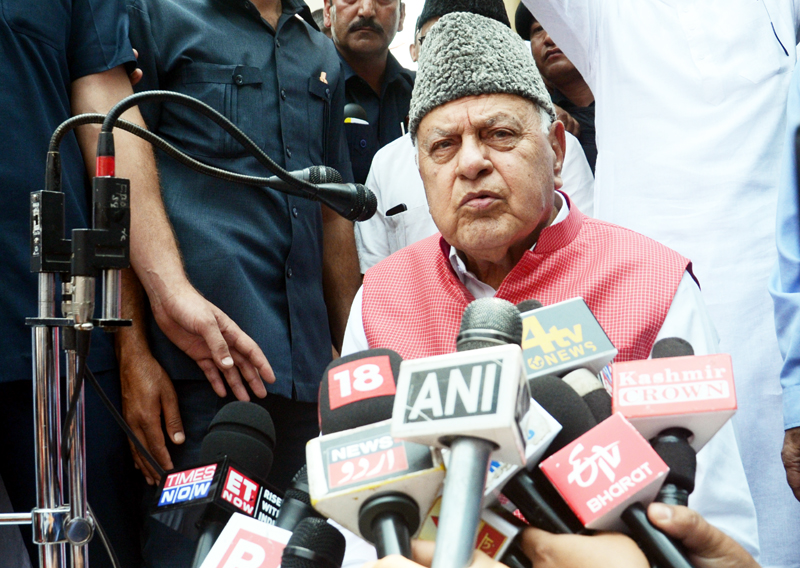 SRINAGAR, July 11: Member Parliament and National Conference president Dr Farooq Abdullah today pitched for dialogue between India and Pakistan for the resolution of Jammu and Kashmir issue.
Dr Abdullah said India has to talk to Pakistan and Kashmiris to resolve the issue of Jammu and Kashmir. “India will have to talk to Pakistan; the Prime Minister has to talk to Kashmiris here and the Pak PM has to talk to people on their side of Kashmir. The leaders of two sides of Kashmir will also have to talk to each other and they will have to strive for such a resolution that nobody should feel like they have lost,” he said while addressing media persons on the sidelines of the ceremony held to commemorate 19th death anniversary of Madar-e-Meharban wife of late Sheikh Mohammad Abdullah here.

While giving the example of peace talks between the Taliban and the US, the NC president said that dialogue process is on there despite roaring guns. “They say that first, the terrorism has to stop before any dialogue process is initiated, you tell me, the issue of Afghanistan is nearing the resolution, the guns continue to roar there, but the process of dialogue is still on and I am hopeful that that dialogue process will bear fruits”, he said.
Farooq said that Centre has to start Afghanistan style talks here. “Why can’t they implement such a policy here? I am telling you that they will have to implement such a policy here as well. New Delhi must understand that talks cannot be held under pressure and force, it has to be done with love,” Farooq said.
While coming down on those who brush off Kashmir as non-issue, he said: “Whosoever says that Kashmir is not an issue is wrong, Kashmir is an issue. It has been recognized by the United Nations. It is an issue between the two countries. Since 1947 such talks are doing rounds even during the times of Jawahar Lal Nehru, the issue was there,” he said.
The NC president said that the issue of the Jammu and Kashmir has to be eresolved come what may. “Those who came after that talked about Kashmir; even Narendra Modi talked about Kashmir issue, he came here and talked about it. The issue has to be resolved come what may, they will have to decide something on it,” he added.
Dr Abdullah further that the situation in the country was changing drastically with regard to the communal harmony. “India was created for everyone, there was no distinction between Muslim, Hindu, Sikh or Christian, but the country has changed it is not what it was after independence. They want to change everything; they want that India should be just for Hindus”, he said.
He said that Modi Government has made lives of people hell with prices of essential commodities soaring in. “The Government has made lives of commoner hell; they say that they work for the welfare of poor, but in the budget that has been passed, the prices of diesel and Petrol have been hiked, is that a people-friendly move; isn’t that going to affect the poor directly,” he asked.
On the restrictions on the ban on movement of civilian vehicles on the National Highway during Shri Amarnath Yatra convoys, Abdullah said that he has raised the issue even in the Parliament that the common man should not suffer.
The NC president said that Divisional Commissioner is lying on highway ban as he himself saw people being harassed on the way.
“I came across a strange statement given by the Divisional Commissioner regarding the highway ban, wherein he has said that there is no ban on the movement along the National Highway. I want to ask them why are they lying to people. I have seen myself how the commoners are suffering in the name of restrictions. What is their fault, the National Highway is for everyone and nobody should be stopped,” he said.