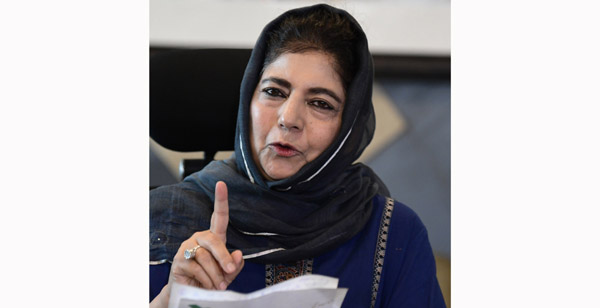 Srinagar, Aug 18 : National Conference (NC) president, Dr Farooq Abdullah today called an All Party Meeting on Monday over the recent decision of Election Commission of India (ECI) to allow non locals to vote in Jammu and Kashmir.
Abdullah said that the All Party Meeting will be held at his Gupkar residence on Monday (11:00 AM) to discuss the latest ECI decision.
He said that all the parties except Bharatiya Janata Party (BJP) have been invited to discuss future course of action.
The National Conference termed the inclusion of outside voters in Jammu and Kashmir electoral rolls as “clear-cut de-franchising” of people.
“Firstly, there is no clarity on what the Chief Electoral Officer (CEO) has said. What is the criterion of an ordinarily living citizen? Can anyone, including tourists, register their vote here?” party’s chief spokesperson Tanvir Sadiq asked. Click here to watch video
He said there are apprehensions among the people, and the Government should clarify.
“The important point is that there are many States in the country where there are no elections yet. Those states can send their people here, register themselves as voters, then vote and then de-register themselves here, after which they will again register themselves in their own States.
“This is the apprehension in the minds of the people as there is no clarity… there is apprehension that all this is being done under a plan,” he said.
The National Conference (NC) chief spokesperson said the people of Jammu and Kashmir should be given the right to vote only because they are locals, and “no outsider should be allowed to vote just because he has come here temporarily”.
Referring to the issue of security forces personnel registering themselves as voters, Sadiq said according to the rules, security forces can register as voters only in peace stations.
“There is Armed Forces Special Powers Act (AFSPA) in Jammu and Kashmir, that means J-K is declared as a disturbed State… so there are no peace stations and then how can security forces register as local voters,?” he asked.
He asserted that the CEO’s statement is “clear-cut de-franchising” of the people of Jammu and Kashmir.
“People from Punjab can come easily to Jammu. There are about 8,000-10,000 outside labourers in some districts of Jammu division. Then, according to the CEO, all of them can become voters. In that case, you are totally de-franchising the people of J-K,” he said.
Meanwhile, People’s Democratic Party (PDP) president, Mehbooba Mufti today appealed to political parties of the country to speak up against the measures and policy of the BJP in J&K and described the voting right in J&K to outsiders in the Assembly polls as “pre-poll rigging”.
Addressing a press conference here, she pitched for unity what she said after the “latest onslaught.” She also appealed to all parties to join hands to fight tooth and nail.
“It’s not about the legality but about the intentions behind it. The Government is not following any rule,” she said when asked about the voting rights of non-locals.
She also pitched for the unity among all and said that after 2024 elections, the Bharatiya Janata Party (BJP) like the abrogation of Article 370 in J&K, will remove Constitution of India and replace the tricolor with ‘Bhaghwa flag’.
Mehbooba,  said that the decisions are not being taken in the interests of the nation, but in the interests of BJP.
“We have been witnessing how the elections are being rigged everywhere in the country, even before and after the elections as well. The BJP is not going to change the country into Hindu Rashtra, but in BJP Rashtra,” she said, adding that the way Article 370 was removed unconstitutionally and Indian constitution was subverted, it is all in the interests of BJP as after the decision, the party sold J&K plot in rest of the countries.
Similarly, voting rights to the non-locals is aimed at conducting fraud elections to allow the BJP fascist local to rule here. “They have understood that after three years of rule in J&K, they couldn’t break the resistance of silent people.”
“The situation is not different for Muslims only, but for every community including Dogra, Pandit as well,” she said, adding that the BJP despite beating the drums for Kashmiri Pandits, failed to ensure ease to them in casting the ballots and in the result of which they have now stopped voting.
“The country should understand the intentions of BJP. After 2024 elections, the Constitution of India will also be removed and BJP will replace the tricolor with Bhagwa flag as the party would not turn the country into Hindu Rashtra but BJP Rashtra,” she said.
“Despite spending a hefty amount for deradicalization, the decisions are being taken that will certainly radicalize the youth. The Government cannot change the ground reality, but it needs to resolve the issue once for all,” she said.
She said that she has contacted Dr Farooq Abdullah to convene an All Party Meeting to decide the future course of action on the issue of giving voting rights to non JK residents stating that it has now gone beyond elections.
“I called Dr Farooq Abdullah to call an All Party Meeting even with those as well, with whom there are differences as the issue is not about the elections. It is the time when we should focus on the Kashmir resolution more than elections as it has gone beyond elections now. Our youth are being radicalized. Brothers form Kashmir Pandit community are being killed, police and security forces personnel are being killed, and everybody is suffering,” she added.