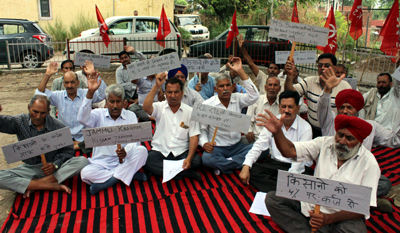 Excelsior Correspondent
JAMMU, June 9: On the call of All India Kisan Mahasang (a national platform of various groups of farmers’ organizations), Jammu & Kashmir Kisan Tehrik (JKKT) today held a protest demonstration here at Exhibition Ground, in support of their demands like complete farm loan waiver and implementation of recommendations of MS Swaminathan Report.
Scores of farmers across Jammu attended the protest shouting slogans against the Government. Holding placards (depicting their demands) in their hands, the protesting farmers were demanding loan at minimum interest i.e. @ 4%, implementation of recommendations of MS Swaminathan Report, legal provision guarantying minimum support price, provision of pension to farmers and farm labourers up to Rs 5000 per month, four times compensation to affected farmers of ring road, etc.
Click here to watch video
While addressing the farmers, Kishore Kumar, JKKT president, said that there is sharp rise of 42% in the number of farmers’ suicide during 2014-15 (one in every 30 minutes) and a large number of hunger deaths have been reported during this period in different parts of the country.
“Instead of implementing its poll promise of minimum support price as per Swaminathan Committee recommendations, the BJP Government meets farmers’ demands of MSP and loan waiver with bullets and killing as was witnessed in Mandsaur in Madhya Pradesh”, he added.
Alleging that a large number of farmers die due to snake bite every year while doing the farming but no compensation is paid to their dependents, Banarsi Dass, a senior leader of JKKT, demanded Rs 5 lakh compensation to the dependents of the farmers in case of death due to snake bite.
Sohan Lal, district president of JKKT said that sheds at Narwal Mandi were specifically constructed for farmers for the purpose to sell their produce but unfortunately these sheds have been occupied by Adaties. He strongly demanded that the shed be vacated immediately by Adaties/businessmen.