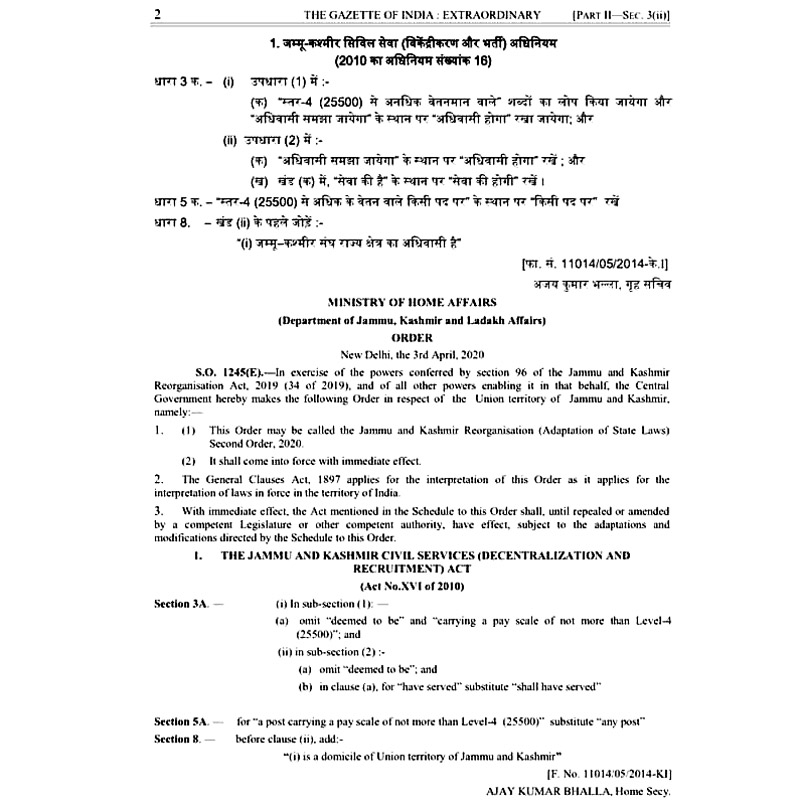 JAMMU, Apr 3: Facing flak from the youth of Jammu and Kashmir, the Union Ministry of Home Affairs (MHA) today reversed its order within two days of issuance and reserved all vacancies in the Government departments, both gazetted and non-gazetted, for domiciles of the Union Territory, who include those who are living in the UT for 15 years and children of Central Government employees serving in J&K for a period of 10 years.
An amendment to this effect was issued today by Union Home Secretary Ajay Kumar Bhalla.
The order comes hours after BJP J&K unit president Ravinder Raina spoke to Union Home Minister Amit Shah and sent him an email apprising him of resentment among the youth of J&K about opening of all jobs except Level-4 posts for all youth of the country and Jammu and Kashmir Apni Party president Syed Altaf Bukhari meeting Shah and National Security Advisor (NSA) Ajit Doval seeking immediate withdrawal of the order. BJP general secretary and party’s pointman on J&K Ram Madhav had also flagged the issue and described fears of J&K youth on losing jobs as “genuine”.
Excelsior had also reported in its yesterday’s edition about strong resentment prevailing among the youth of Jammu and Kashmir on the Central Government decision to reserve only Level-4 posts for the youth of Jammu and Kashmir which included constables, Junior Assistants, Peons and equivalent and opening all others for entire country.
To reverse the order which was issued on April 1 by the Home Ministry, the MHA has carried out amendments in Sections 3A, 5A and 8 of the Jammu and Kashmir Civil Services (Decentralization and Recruitment) Act.
The amendment in Section 5A of the Act has been done to substitute word “Level-4 posts” (25,500) with any “post”, which means all posts of Jammu and Kashmir in the Government Departments now will be reserved for domiciles of Jammu and Kashmir.
With these changes, all job in the Union Territory of Jammu and Kashmir would now require domicile certificates to be issued by respective Tehsildars. Earlier, only Class-IV, constables, Junior Assistants and equivalent posts were reserved for J&K domiciles and for rest besides J&K, all youth of the country were eligible.
The Government has inserted a clause for domicile category under which a person has to stay in the Union Territory for a period of 15 years. Children of All-India Services personnel who have served here for 10 years also come under the category.
“Anyone who has resided for 15 years in Jammu and Kashmir or has studied for seven years and appeared in Class 10 and Class 12 examinations in an educational institution located in the Union Territory is a domicile,” the Act said.
Further, it added, anyone who is registered as a migrant by the Relief and Rehabilitation Commissioner (Migrants) will also be deemed to be a domicile
The others who can be deemed to be a domicile include children of those Central Government officials, All- India Services officers, officials of Public Sector Undertakings and autonomous bodies of the Central Government, Public Sector Banks, officials of statutory bodies, Central University officials and those of recognized research institutes of the Central Government who have served in Jammu and Kashmir for 10 years.
“Children of those who fulfill any of the conditions or children of such residents of Jammu and Kashmir as reside outside Union Territory in connection with their employment or business or other professional or vocational reasons but their parents fulfill any of the conditions provided in sub-section, will be treated as domiciles,” the notification said.
Earlier in the day, BJP national general secretary, Incharge Jammu and Kashmir, Ram Madhav flagged concerns over new domicile law approved for the Union Territory of J&K.
Madhav, the pointman of the BJP on Jammu and Kashmir, told a national newspaper that there were issues that the Jammu unit of the party had flagged, and that “their fears are valid”.
Madhav had confirmed that Shah has also been apprised of the concerns of the people of Jammu and he assured that he would look into it.
“There are some issues with regard to the domicile notification that have been flagged, especially with regard to reserving jobs for locals, and to an extent these fears are valid,” Madhav said.
Jammu and Kashmir Apni Party president Syed Altaf Bukhari, former Minister, also met Shah and Doval in New Delhi this afternoon and demanded that all posts in Jammu and Kashmir should be reserved for the local youth by removing the clause of reserving only Level-4 posts for the youth of J&K and opening others for entire country.
“All Government jobs in Gazetted, Non-Gazetted cadre and other vacancies in Jammu and Kashmir as well as division and district levels should be reserved for the local youth,” Bukhari demanded.
He had also demanded that all residents of Jammu and Kashmir as on August 5, 2019, should be declared as domiciles of J&K.
It was on August 5, 2019 that the Central Government had abrogated special Constitutional provisions of Jammu and Kashmir and bifurcated the erstwhile State into two Union Territories of J&K and Ladakh.
A spokesman for Bukhari had claimed that Shah and Doval assured Bukhari that they will look into the concerns expressed by him and take appropriate decision.
BJP Jammu and Kashmir Union Territory president Ravinder Raina too had made telephonic call to Union Home Minister Amit Shah and apprised him of resentment among youth about new domicile law besides raising other issues.
Raina explained to Shah all issues in detail pertaining to Jammu and Kashmir during the telephonic call.
Later, Raina sent detailed report on new domicile law in Jammu and Kashmir to Shah through e-mail.