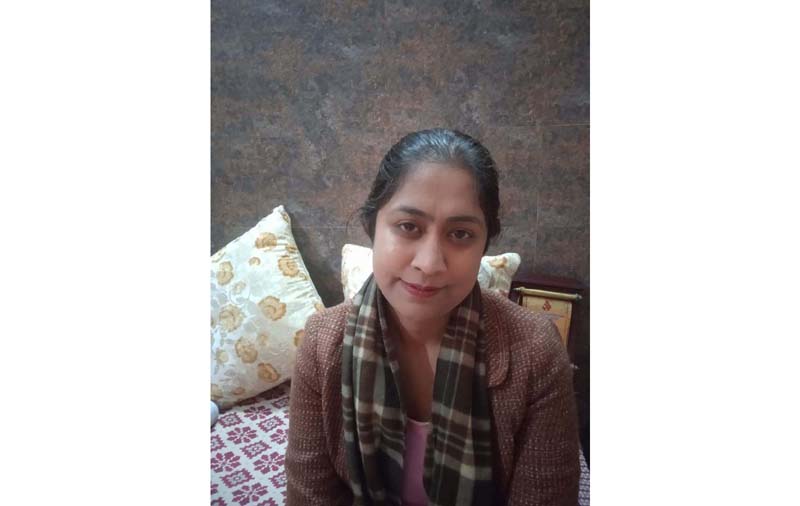 Sanjeev K. Sharma
JAMMU, Dec 3: While more than four years of the mandatory tenure of five for the elected Urban Local Body have passed, Ward Number 17 of Jammu Municipal Corporation (JMC) has only received 50 per cent street lights of what it required in total and the work of road blacktopping is merely 25 per cent complete in the Ward.
Giving more details in this regard, Advocate Nidhi Mangotra, Councillor of the Ward informed that of the installed street lights 15 per cent are non-functional and the agency concerned even takes a month time to repair these.
She further said that even on marriages and other important functions in the Ward these lights are not repaired despite her personal intervention.
Nidhi, who politically belongs to BJP and is a first time Councillor said that hanging wires and damaged poles are also there in the Ward and the same can’t be corrected due to lack of public cooperation.
She said that areas of her Ward include New Plot, Pakka Tallab, Ambphalla and Apartments of Judges at BC Road.
“There are 10 Nallahs in my Ward and almost all are well maintained and properly repaired barring one at Pakka Talab area for which tendering has been done and these Nallahs does not cause damage even in rainy season,” the Councillor said.
“Stray dogs are very much there in my Ward and create a lot of problems,” she maintained adding: “These canines not only spread litter in the Ward but also panic ladies, elders and children and even chase two-wheelers.”
Nidhi said that construction and repair work of lanes and drains in the Ward is 90 per cent complete and the remaining will also be taken up soon.
She said that there are two Parks in the Ward, of these the one at Pakka Talab is well developed and has Open Air Gym, lights, tiled path and a fountain.
“It is a Jammu Development Authority (JDA) Park but JDA authorities do least for its maintenance which is done by JMC,” Nidhi said.
The JMC Councillor said that there is a playground in the Ward at Ved Mandir on which JMC has spent Rs. 1 crore on development works.
“There is one public toilet and also a health centre in the Ward but there is no parking place for vehicles in my Ward,” she informed adding that sewerage work is also not yet complete in the Ward.
Nidhi said that there are 19 Safai Karamcharis in the Ward and of these ladies are more than gents but the Ward needs 40 Safai Karamcharis to properly clean the area.
She further said that developmental works worth Rs. 4 crore are underway at Shourya Samarak in his Ward under which an auditorium will be constructed to show patriotic movies.
“A library along with a museum dedicated to martyrs of the nation will also be constructed at Shourya Samarak,” the Councillor continued.
She said that water supply pipes in her Ward have not been replaced for the last 50 years which shows the poor work culture of the concerned department.
Nidhi said that Smart Meters have been installed in the Ward but the public is not happy with these as these meters give hefty bills.
“Auto moving from door-to-door to collect the garbage from houses in the Ward is doing a good job but as only one auto has been provided in my Ward there is a need for one more,” she said.
Nidhi also said that after the garbage collecting autos were pressed into service number of garbage dumps have been reduced in the Ward but now it is a duty of the people to use services of these autos and stop throwing garbage here and there.
She informed that drug addicts and peddlers are very much active in her Ward for which the police should act strictly and save the youth from falling prey to this wrong world.
Nidhi further informed that cases of thefts involving iron gratings from the drains have also been reported from Ward number 17.
The Councillor said that there are two Community Halls in the Ward at Guru Ravi Dass Mandir and near Gurudwara of New Plot on which JMC has done many development works.
She said that though many widows, physically challenged persons and old age persons in her Ward are getting pensions but the newly introduced rule of these pensions exclusively to Below Poverty Line people is creating problems for many deserving persons.
The JMC Councillor also said that almost all the people in her Ward have made their Ayushman Cards and all the eligible Voters have got their Voter Cards and this time about 200 new Voter got their Voter Cards in Ward 17.