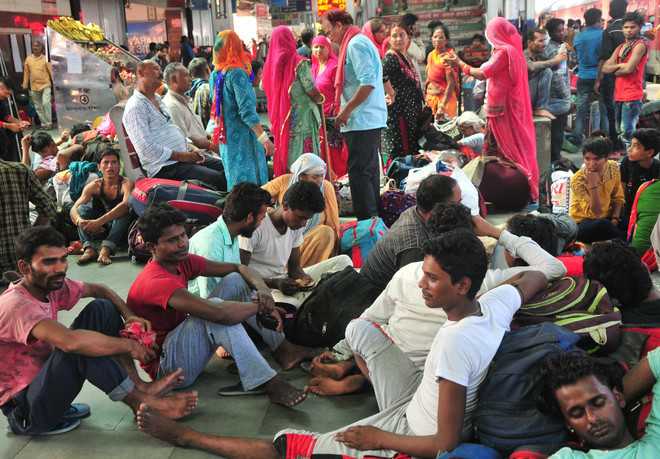 Numerous schemes, projects all set to miss deadlines for completion
Industries, agriculture, horticulture sectors too face crisis
Mohinder Verma
JAMMU, Aug 25: The mass exodus of non-local labourers early this month has badly impacted the developmental works in entire Kashmir valley with executing agencies and contractors facing immense difficulties in carrying out the assigned task. Due to the prevailing situation, numerous schemes and projects particularly those which were targeted to be completed by the end of current year are all set to miss the deadlines fixed by the Government.
Official sources told EXCELSIOR that security advisory by the Government on August 2, 2019 asking tourists and Amarnath Yatris to curtail their stay immediately in the Kashmir valley triggered such a panic among the non-local labourers that they promptly started returning to their respective States.
While official figures indicate that about 30,000 non-local labourers departed Kashmir valley within few days of issuance of security advisory the unofficial figures put the number at more than 50,000 on the ground that maximum number of labourers reached Jammu from Kashmir by making own arrangements of transportation and without the support of the Government, sources said.
For the past several years, the non-local workforce has helped in fulfilling Kashmir’s labour demands in view of minimal local labour class and their exodus under the prevailing situation has dealt severe blow to the developmental works in each and every district of the Kashmir province, they said while disclosing that work on majority of the schemes and projects has remained stalled ever since the exodus of thousands of non-local labourers.
“Though the District Development Commissioners have repeatedly been asking the executing agencies and contractors to try their level best to re-start work yet in the absence of required number of labourers the latter are not in a position to act on the directives”, sources said.
They further said, “the contractors are repeatedly contacting the suppliers of the workforce on their cellular phones but they are not receiving any positive response in view of the reluctance of the labourers to return till restoration of complete normalcy in the Kashmir valley”.
Due to the prevailing situation large number of schemes and projects, which were targeted to be completed by the end of current year, will miss the deadlines fixed by the Government. Among the lists of such projects are those which were sanctioned under the Languishing Funding Scheme and were about to be completed by end of current year.
When contacted, Deputy Commissioners of several districts of the Kashmir valley confirmed that almost all the developmental works have come to the grinding halt since early this month. “For completion of works not only general labourers even skilled manpower is also required but at present nobody is ready to come back”, they said.
In response to a question, they, while wishing anonymity, said, “the exodus of thousands of skilled and non-skilled labourers has also created massive crisis for local industries, horticulture and agriculture as outsiders were playing major role in all these sectors”.
“Generally, non-local labourers work in the agriculture and horticulture fields and in their absence the agriculturists and horticulturists are facing immense difficulties in getting their routine works done”, sources said.
As per the reports, even availability of building material for the construction works has registered sharp decline as non-local labourers were the main workforce in the quarries, brick-kilns and in the cement plants.
“The labourers from different States of the country particularly Uttar Pradesh, Bihar and Odisha will return only when normalcy is restored in the Kashmir valley and till then crisis like situation will continue to loom large over all these sectors”, sources said.
Some labourers, who left Kashmir valley following issuance of security advisory and preferred to work in Jammu instead of returning to their respective States, said, “there is no question of going back to the Valley till there is complete normalcy although contractors owe thousands of rupees to us for the works which we carried out before issuance of security advisory”.
“We prefer to lose the money than going back to Kashmir valley under the prevailing circumstances”, they said.