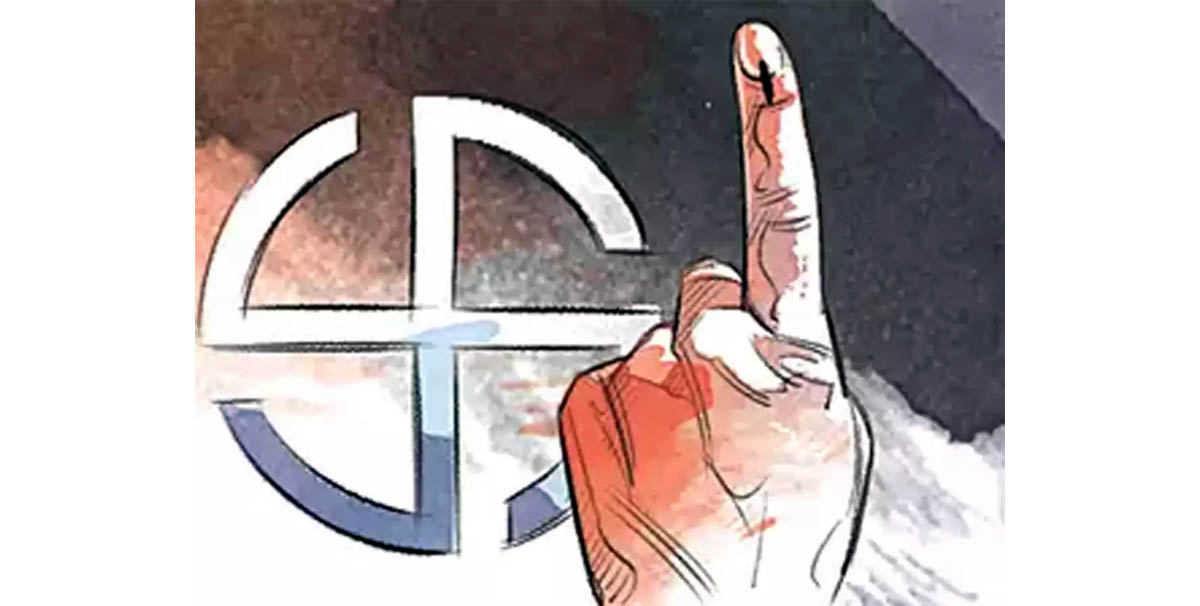 NEW DELHI, Dec 5: Exit Polls today predicted a big majority for the BJP in Gujarat while most of them gave an edge to it in Himachal Pradesh, indicating re-election of the ruling party in both States.
However, two Exit Polls showed a dead heat between the BJP and the Congress in Himachal Pradesh where results could go either way.
The counting of votes in both States will take place on December 8. Elections for the Himachal Pradesh Assembly took place on November 12, while polling in Gujarat happened in two phases on December 1 and 5.
Most Exit Polls predicted a big mandate for the BJP in Gujarat in the range of 117-148 seats in the 182-member Assembly, while the Congress was predicted to bag seats in the range of 30-51 seats. The Aam Aadmi Party was projected to bag anything between three and 13 seats. The majority mark in Gujarat is 92.
In Himachal Pradesh, the exit polls projected a range of 24-40 seats for the BJP and 26-40 seats for the Congress. The AAP was projected to bag seats in the range of 0-3. The majority mark is 35 seats.
According to the News X-Jan Ki Baat Exit Poll on Gujarat elections, the BJP was likely to get 117-140 seats, Congress-NCP 34-51, AAP 6-13 and others 1-2.
Republic TV P-MARQ predicted 128-148 seats for the BJP, 30-42 for the Congress-NCP, AAP 2-10 and others 0-3.
TV9 Gujarati forecast that the BJP would get 125-130 seats, Congress-NCP 40-50, AAP 3-5 and others 3-7.
For Himachal Pradesh, Aaj Tak-Axis My India predicted a close contest between the Congress and the BJP. It said the BJP would get 24-34 seats and the Congress 30-40 seats.
India TV predicted that the BJP would bag 35-40 seats, Congress 26-31 and AAP zero.
News X-Jan Ki Baat survey said the BJP was likely to get 32-40 seats in the hill state, Congress 27-34 and AAP zero.
While Republic TV P-MARQ predicted that the BJP would get 34-39, Congress 28-33 and AAP 0-1, the Times Now-ETG said the average seats BJP was likely to get was 38 and the Congress 28.(PTI)

Clear win for AAP in MCD
Three Exit Polls today predicted a clear win for the Aam Aadmi Party in the Municipal Corporation of Delhi (MCD) polls and an end to the BJP’s 15-year rule at the civic body.
The results for the MCD polls will be declared after counting of votes on December 7. Over 50 per cent of the total 1.45 crore eligible votes were polled in the elections for the total 250 MCD wards on Sunday.
The Aaj Tak-Axis My India survey showed the AAP was going to bag 149-171 municipal wards, while the BJP will win 69-91 wards. The survey gave 3-7 wards to the Congress and 5-9 to others.
The AAP is predicted to win 146-156 wards in the Times Now-ETG survey which gave 84-94 wards to the BJP and, 6-10 to the Congress and up to four to others.
The News X exit poll gave the Aam Aadmi Party 150-175 wards and the BJP 70-92, while the Congress may win 4-7 municipal wards.
The BJP that has been ruling the civic bodies since 2007 had won 181 of the total 270 municipal wards in the 2017 civic body polls, trouncing the AAP and the Congress. The AAP won 48 wards and the Congress 30.
Earlier this year, the three Municipal Corporations in Delhi were unified by the Centre into MCD having 250 wards. The total number of wards was 272 under the three corporations.
Both the AAP and the BJP have fielded 250 candidates, while the Congress has 247 in the fray. The number of independents is 382.
Among other political parties, the BSP contested the poll on 132 wards, the NCP on 26, the Janata Dal (United) on 22, and the AIMIM 15. (PTI)