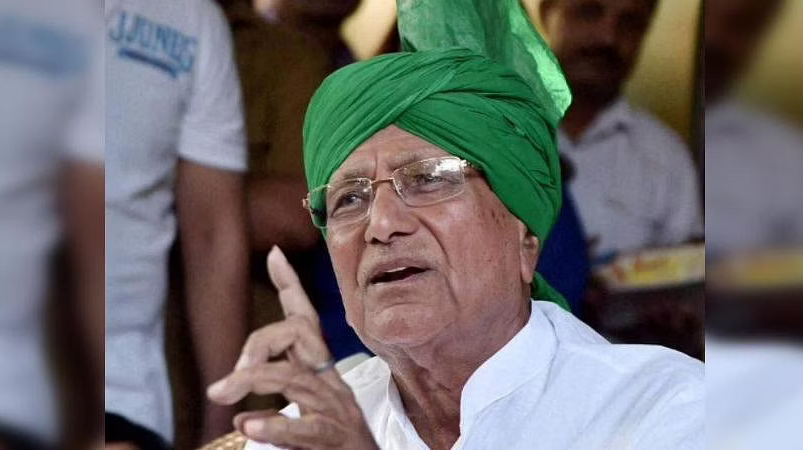 New Delhi, May 27: Special CBI court in Delhi on Friday sentenced former Haryana Chief Minister Om Prakash Chautala to four years imprisonment and imposed a fine of Rs 50 lakh in a disproportionate assets case.
The Court also ordered the confiscation of four of his properties.
Chautala appeared physically and was present in the courtroom.
Special Judge (PC Act) Vikas Dhull last week had convicted Chautala and said the accused had failed to satisfactorily account for such dis-proportionality by proving his source of income or means by way of which, he acquired assets during this period.
According to the Central Bureau of Investigation’s (CBI) FIR accused Om Prakash Chautala, while functioning as Chief Minister of Haryana during the period from July 24, 1999 to March 5, 2005, in collusion with his family members and others, accumulated assets, immovable and movable, disproportionate to his known lawful sources of income, in his name, in the names of his family members and others to the extent of Rs 1,467 crores.
FIR further stated that the accused accumulated enormous wealth and invested the same throughout the country in the shape of thousands of acres of land, multi complexes, palatial residential houses, hotels, farmhouses, business agencies, petrol pumps and other investments apart from investments in foreign countries.
FIR also stated that 43 immovable properties in all, apart from cash and jewellery were accumulated. Apart from 43 alleged properties listed in the FIR, additional properties were also suspected to be of the accused family.
An investigation with regard to additional properties was also conducted for ascertaining the link of the accused family with the said properties.
The chargesheet filed in the matter after the conclusion of the investigation stated that accused OP Chautala had acquired assets, both immovable and movable, which were disproportionate to his known source of income.
The disproportionate assets were calculated to be Rs 6,09,79,026 and the percentage of DA (Disproportionate Assets) was 189.11 per cent of his known sources of income.
Accordingly, CBI had charge-sheeted the accused for the offence under the relevant section of the Prevention of Corruption Act.
Apart from the chargesheet filed against the accused OP Chautala, the CBI had filed two more charge sheets arising out of the present FIR, against the sons of the accused including Abhay Singh Chautala and Ajay Singh Chautala and others, which are being tried separately.
Om Prakash Chautala is a former Chief Minister of Haryana from the Indian National Lok Dal and son of sixth Deputy Prime Minister Chaudhary Devi Lal.
Chautala was released from the Tihar Jail on July 2, 2021, from a 10 years prison sentence after completing the due formalities.
He and 53 others, in June 2008, were charged in connection with the appointment of 3,206 junior basic teachers in the state of Haryana during 1999-2000.
In January 2013, a Delhi court sentenced Chautala and his son Ajay Singh Chautala to 10 years’ imprisonment under various provisions of the IPC and the Prevention of Corruption Act. (Agencies)