Srinagar, Jan 15: For the last 60 years the residents of Dargam in Pattan area of North Kashmir have been running from pillar to post to improve the infrastructure of the school in their village but continue to face disappointments.
In 1960 the Government established a Primary School in the village which was running from a single rented room in the village until 1998. The same year the Government upgraded the school to middle level and constructed a three-room building. However, the building could not withstand the jolts of earthquake in 2005 as the walls developed cracks. The cracks widened in the 2014 leaving the building unsafe
A 70-year old, Abdul Aziz Wani, who has attained the elementary education from the school said that the school would get students from far off places. He recalled that the school started as a community school in 1950 and was upgraded it in five years. “In 1960 the school was registered by the Government. Since then we have been raising the issue with the authorities,” he said.
The issue passed to a new generation who formed an Education Committee for the purpose. In 2008 the village education committee wrote to concerned Zonal Education Officer for new building without any success. “The school teachers have also raised the issue with the higher authorities but to no avail. After continued requested form the committee the SDM of the area visited the building last year and assured speedy construction,” Ghulam Hassan Wani, a member of the committee said.
He said the committee even wrote to the Human Rights Commission who took suo moto cognizance of the matter and termed the building as unsafe. “The school was shifted to a rented accommodation after the report,” he said. He, however, asked why is the DPR of the building lying in the ZEO’s office for last six-months?
The locals said that super- 50 coaching classes are being conducted in the rented accommodation where the students from around 3- villages come for tuitions. “Due to unavailability of the washrooms the students are forced to defecate in the open. We raised the issue of the washrooms with the concerned BDO. We even went to officials of the concerned departments but nothing has happened,” Farooq Ahmad, another member said.
He added that youth committee raised the issue with the concerned CEO but to no avail, “the students particularly the females are facing hardships in absence of the washroom facilities. The washrooms are unavailable for the last nine months since the school was shifted to the rented accommodation,” he said.
Deputy Chief Education Officer, Balbir Singh, told Excelsior that they would look into the matter and expedite the process.

HPCL flags off 1st lot of 20 Tank Trucks for Leh 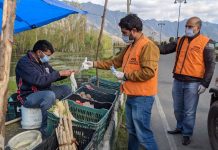