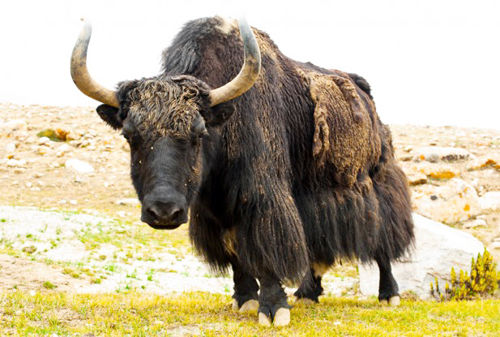 Prof. R.D. Gupta*
The most notable wild animal Yak, locally called Dong, is bovine animal of Himalayan Tibet and other parts of Central Asia. It is a large animal weighing about 300-350 kg male and 250-300 kg female (Demo). Sometimes its weight is as high as 1000 kg. Yak is ox-like in built with short thick legs, high shoulders and large curved horns. The body is covered with long black hair with a long bushy tail. The domesticated yak is generally black in colour but there is a good number of brown, reddish, pie bald and alpine colour yaks, as well.
Because of the presence of special physical features of yaks, like large nasal cavity with highly coiled, turbinated and large thoracic trunk, well developed lungs, higher red blood cells in blood, and spongy tissues in the well developed skeletal system, they are capable of high oxygen capacity. As such they maintain the mechanical economy of movement. These animals can trek up the steep slopes of mountains with carrying capacity of load varying from 50 to 70 kg on their backs for about 8 hours at a stretch. There is also an old and traditional saying in the Himalayan region: “Whatever moves in Tibet, does so on the backs of Yaks.”
Dwelling environment of Yak
Yak is the only animal which lives on the mountains at an altitude of 2500 to 6000 m above mean sea level with temperature well below 500C. Therefore, by the mid of spring, yaks are shifted to highland pastures near to the snowline and reared there till the autumn. They generally remain in herds in the highland pastures even though no other wild animals dare to harm them. They are very sensitive and manage to find moss, lichen and shoot of grasses under the snow, and quench their thirst from the ice melt water.
In India, yak is mostly confined to the cold arid region of the country, consisting of Ladakh and Kargil districts of Jammu and Kashmir and those of Lahaul and Spiti and Kinnaur of Himachal Pradesh. Apart from cold arid region, it is also found in places like Arunachal Pradesh, Sikkim and parts of Uttarakhand.
In Ladakh, the best yak producing belts are Durbok area, Tyansyar and Digger Wala Photokar, Giamiru and Changthang area. Paddar area of Kishtwar district in Jammu region of Jammu and Kashmir State is too an ideal place for the abode of yak.
Multipurpose uses of Yak
The yak having multipurpose uses is popularly known as “Suragay” in Tibet. In addition to functioning as an effective and appropriate source of transport for the people of mountains, yak also provides dung, hair, hide, meat, milk, horns and hooves to them. Above all, Dzo the sterile F, crossing of yak and cow, is indispensable for the farmers of Ladakh region as it is used for ploughing the fields. Every farmer, with land holding and affluent, has one or two Dzo for ploughing purposes. The female yak (Dzomo) is better milch animal as compared to local cow. Thus, yak is a part and parcel of the agricultural activities in rural areas of Ladakh and Paddar. Being a vital component of the mountains economy, rearing of yak now has become a lucrative business. For example, its dung is used as a means of fuel in the biting and chilly cold. Its two kinds of hair viz., the down hair or undercoat and upper hair or outer coat are used for obtaining wool. The former is very soft which is quite kin to the threads of Pashmina while the latter is very coarse. After sheaving during the month of June, an animal gives about 0.3 to 0.6 kg fine and 1.5 to 2.0 kg coarse wool. Fine wool is employed for making pullovers, socks and mufflers while coarse one is used for preparing bags, hats, ropes, carpets, tent and rough blankets. An offering of a silky white yak’s coat, during marriage celebration of Lord Shiva with Devi Parvati by Shiva’s mother-in-law, recalls a mythological tale about the yak’s hair.
Another aspect of the yak that enables it as a prized possession for every family of Ladakh is its milk. Although the yield of milk is very low i.e., 200 liters during whole of the lactation period ranging from 100 to 150 days yet it is very rich in fat (usually 10%). The fat percentage of female yak Demo’s milk is exceptionally high (13%). Due to the presence of more fat, it is difficult to drink more than 200 grams of milk. The inhabitants of Ladakh prepare milk products like butter and cheese to meet the heat and fluid requirement of the body. Therefore, yaks are considered indispensable for better and cheese production. The tents, in which the people of Changthang pass their nights while moving from one place to another, are made up of yak’s coarse hair or wool. The lamps which they burn during night are burnt by yaks’ fat. In spite of so many uses of yak it is dismay to note that their population has declined considerably due to over-exploitation.
Population of Yak
At one time, their population was so high in Ladakh and other Himalayan regions that wild yaks (Bos grunniens) and domesticated yaks were used for hunting purpose and as a mere sports. In the beginning of 20th century, there were a number of hunting expeditions in Tibet and Ladakh. Within a span of 10 years, its population has come down from 40,000 (March 1993) to 30,000 in India.
SUGGESTIONS
(i) In view of additional uses of yak, its population is required to be sustained.
(ii) Nature awareness campaign for the information of local people, regarding uses of yak, should be taken up on a large scale.
(iii) Suitable breeding and management programmes are required for domestic yak.