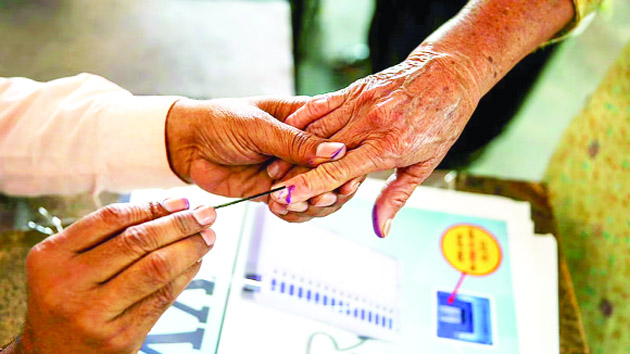 Brij Bhardwaj
It will be an election with a difference. As different as an Indian wedding without “Band Baja and Barat”.. There will be no processions to file nominations. No rallies and no public meetings to be addressed. There will be no corner meetings. All that would be allowed is door to door canvassing, virtual meetings and campaign on social media, phone calls and messages through newspapers.
Political parties will be saved from bother of collecting crowds for public rallies or hiring buses for them. But new campaign does not come cheap as it would need hiring men for setting up IT cells, mobilising hundreds, if not thousands of workers who are savvy with technology to reach voters. Realising the problem Samajwadi Party leader Akhilesh Yadav had suggested that Election Commission should provide funds for such a campaign.
Bhartiya Janata Party is best prepared for such a campaign as it has trained over a lakh of persons and set up media and IT cells in all five States going to polls. It has also taken lead by organising public rallies by the dozens in important States like U.P, Goa and Uttarakhand, which were addressed by party leaders. Prime Minister Narendra Modi, top crowd puller and important campaigner made regular visits to U.P. Samajwadi Party leader Akhilesh Yadav also held rallies while Mrs Priyanka Gandhi Vadra concentrated on organising meetings of women , but are no match to BJP.
With all rallies and public meetings banned up to Jan 15, the opposition parties will not be able to catch up in days to come. Mayawati, BSP leader has not even held a single rally so far. It is doubtful if Election Commission will allow rallies even after Jan 15 looking at the speed with which Covid cases are spreading. But even without rallies the contest is expected to be keen, as issues have been formulated and public mind made up even before the polling dates were announced.
Bhartiya Janata Party is seeking votes in the name of development, nationalism and strong leadership of Prime Minister Narendra Modi. BJP as a national party is always first to start campaign. It has a strong cadre base, plenty of funds and tested election machinery. Opposition parties on other hand are raising issues like high prices , unemployment and sufferings that people went through during second wave of Covid.
People will have to make a choice and decide who should rule for next five years. Out of five States going to polls four have BJP Government, while Punjab has Congress in power. In the coming polls, result of contest in U.P will have far reaching impact as it will show the direction in which mood of people is moving. U.P which sends more than 80 members to Lok Sabha is very important for ruling BJP which won most of the seats in 2014.
There was lot of speculation about postponing polls in view of the current wave of Corona, but Election Commission has decided to hold the polls as schedule because it is a Constitutional obligation. Even Allahabad High Court had suggested postponement but the same did not find favour with the Centre or the Election Commission. Agreed at present situation is grim with Corona spreading fast but EC felt elections can be held if due care is taken and all abide by the restrictions imposed by the Commission.
In case the current poll for five State Assemblies is held with current limitations, it may set the trend for future also . As with availability of modern means of reaching voters there is need for change . For instance not very long ago all walls were plastered with posters during election time but now there are few. Same could become the case for rallies and public meetings. Number of such meetings could become few and instead we have debates in media and virtual campaign. It would be watched with interest.
Many agencies have started talking about trends and predicting results, but real picture will emerge only after candidates are named and campaigns start. A lot depends on selection of candidates . It is far more important in elections of State Assemblies as compared to Lok Sabha . There is little doubt that voters in India make different choices while voting in Lok Sabha poll and election to State Assembly.