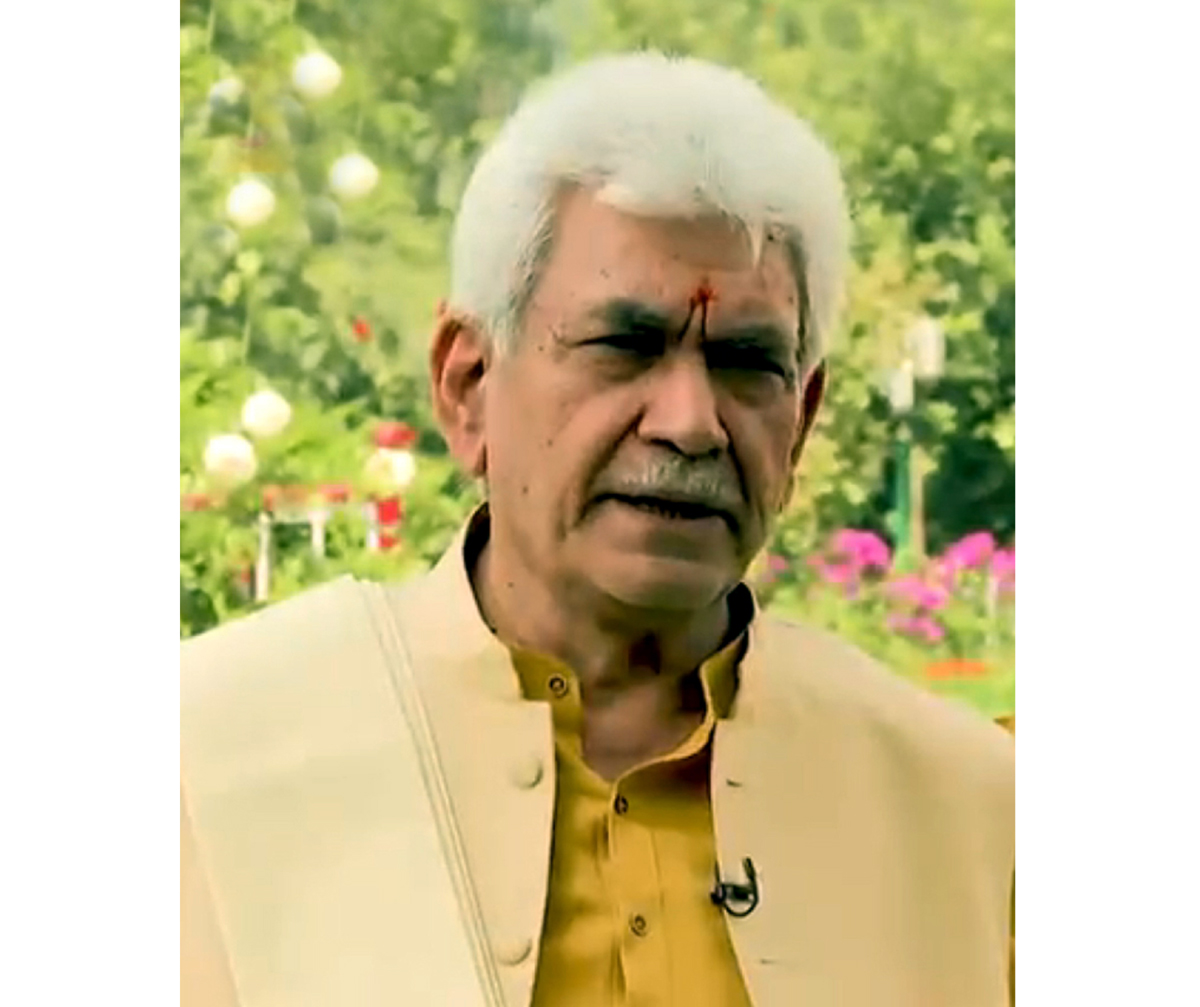 ‘No political worker is under house arrest’
Family members of militants were given jobs, we removed them
Sanjeev Pargal
JAMMU, Aug 5: Lieutenant Governor Manoj Sinha said today that Election Commission has fast paced the process of rationalization of Polling Stations and revising voter lists but a final call on conducting Assembly elections in Jammu and Kashmir has to be taken by the Commission.
“Elections will definitely be held in the coming times but when they are held will depend on the Election Commission,” Sinha said in ‘Press Conference’ programme of ABP news channel this evening.
He recalled statement of Union Home Minister Amit Shah that elections will be held after completion of Delimitation Commission exercise in Jammu and Kashmir followed by restoration of Statehood at an appropriate time.
“No one should have any doubts over statement made by the Home Minister in the Parliament,” the Lieutenant Governor said.
Responding to a question that more Assembly seats were increased in Jammu to ensure election of Hindu Chief Minister in Jammu and Kashmir, he said the Chief Minister is decided by the people. “I think we shouldn’t discuss whether the Chief Minister will be Hindu or Muslim but he will be citizen of J&K and will work for the people”.
On whether the border States should have elections or Central Rule, he favoured elections saying the Centre and States should work together.
Responding to another question on initiation of political process, Sinha quipped: “There are 30,000 elected representatives (Sarpanchs, Panchs, DDC members and Urban Local Bodies’ representatives etc) and five Members of Parliament (MPs) in Jammu and Kashmir. This is political process”.
Sinha asserted that no political worker is under house arrest presently.
Replying to a question on house arrest of political workers, he said: “No political work is under house arrest now. Only criminals are under arrest and they will remain arrested in future also”.
Asserting that there was no assurance on withdrawal of AFSPA or Army, the Lieutenant Governor said Army is here for protection of borders also.
“Situation has improved considerably during last three years in Jammu and Kashmir. Militancy has gone down. The problem here is 30-40 years old and is being fully treated,” he added.
Sinha said that family members of some top militants had been given Government jobs (by previous regimes).
“We have removed some of them after following due process of law”.
On targeted killings, he said two to three incidents have taken place including that of a Government teacher and a Kashmiri Pandit but if you take the figures of last 30 years the violence level has gone very down. One or two killings can’t be an assessment for law and order situation, he added.
“Not a single innocent person has been killed in security forces’ firing during last three years,” he said, adding the Government policy is very clear that it won’t touch innocents and won’t spare the guilty.
However, the Lieutenant Governor said the neighbour (a reference towards Pakistan) remained a major headache.
“Development in Jammu and Kashmir including increase in GST, Excise, Stamp duty, massive influx of tourists etc is not being liked by the neighbour and few persons who are working at its behest. They want to disturb the situation but our security forces clearly have an upper hand and are working in coordination,” he said and added that with Narendra Modi as the Prime Minister, the people have expectations that not even a single incident should take place.
Sinha said those who recruit the youth are more responsible for terrorism but “we are now targeting very ecosystem of terror. Parents are also coming forward. Some youth have been brought back from the militancy”.
He, however, admitted that narco terror and supply of drugs through drones remained a challenge.
“This menace is being tackled on twin fronts by the Jammu and Kashmir Government as well as Central agencies.
The Lieutenant Governor asserted that Kashmir is moving forward on Sufism. He said 75 place of Sufism are being developed.
On ‘Har Ghar Tiranga’ campaign, he said he will urge the people and hope many will join the campaign. Last year also, students and people participated in similar campaign.
On PDP chief and former Chief Minister Mehbooba Mufti’s comments and installation of erstwhile flag of J&K on Social Media, he said those who have held Constitutional posts should behave responsibly.
Replying to a question on rehabilitation of Kashmiri Pandits, Sinha said 6000 jobs and 6000 houses were sanctioned for them in the Kashmir valley. Now only 300 posts are vacant and rest have been filled up. By October, 1200 more houses will be construction Work on 900 flats will start shortly. Majority of people in Kashmir want then (the Kashmiri Pandits) to return, he added.