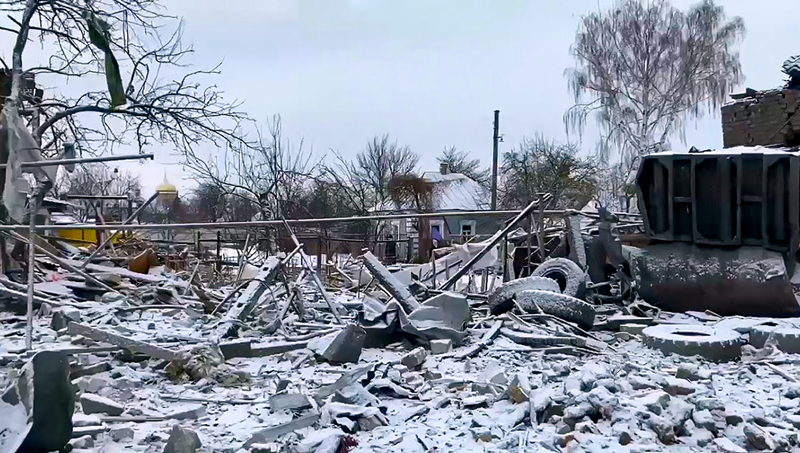 POKROVSK (Ukraine), Sep 11: Through the debris-strewn rooms of the bomb-blasted house, the incessant ringing of a phone punctuates the crunch of broken glass splintering underfoot as police lay out a body bag.

But the call will never be answered.

The phone’s owner crouches lifeless on the floor of his home, in a front room where the explosion from a missile — one of several to hit this eastern Ukrainian town — found him.

The missiles that rained down on Pokrovsk Saturday night and into the early hours of Sunday were part of a barrage of attacks on towns in eastern Ukraine’s Donetsk region that left at least 10 people dead Saturday, according to Donetsk governor Pavlo Kyrylenko.

They came as Ukraine pressed forward with a counteroffensive just to the north in the Kharkiv region, pushing Russian forces into a retreat from key areas.

Six of the dead were in Pokrovsk, mayor Ruslan Trebushkin said in a message posted on Telegram.

The industrial town about 40 kilometers from the front line had been hit twice before by missiles, in May and July, but never before by so many in one night.

A flash illuminated the night sky as a detonation sounded out across the town in the second of six explosions.

An ambulance raced through the darkened streets, and flames rose from a fire triggered by the missile strikes.

At least three of those who died were killed when one of the missiles struck between a row of small houses and nearby train tracks, collapsing part of a nearby abandoned building, leaving one home burnt to the ground and severely damaging several more.

Oleksandr Zaitsev, 67, stood quietly outside his friend’s house as the police arrived. His friend’s wife had been calling her husband nonstop since the strike, he said, but nobody was picking up.

The house’s windows were shattered, the walls were pockmarked from shrapnel, and the front door blown off its hinges. Inside, the police gently rolled Zaitsev’s friend into a black body bag.

Next door, Yevhenia Butkova, 47, stood stunned in the center of her living room, trying to calm her two agitated pet dogs. Blood stained the sofa where she and her husband had been watching television when the first missile struck.

On Sunday morning, he was recovering in a hospital after doctors removed shards of glass from his wounds, she said.

Chunks of debris from the ceiling littered the floor throughout the house, whose entrance was reduced to a jumble of splintered wood, plaster, glass and brick. One of the plywood boards the couple had put over their windows for protection had been blown clean across the garden. But a combination of that and the plastic they had put over the glass probably saved their lives, Butkova said.

“It was all quiet in Pokrovsk, this was very unexpected,” she said. “It was horrible.”

Further down the row of single-story houses, an elderly couple swept rubble and glass from their small porch, dried blood still streaking their faces.

Mariia Trutko, 85, and her husband Oleksii Maksymenko, 75, had been sleeping when they were jolted awake by the blast.

“I can’t hear anything without my hearing aid, and then it hit so hard that I heard,” said Maksymenko, a retired coal miner.

“Everything flew. … I started bleeding, so we got up to see what that was, and then there was another one: boom!”

Their bed was littered with jagged shards of glass and plaster from the roof that covered them both, Trutko said. A large, square piece of glass lay on the pillow, and spots of blood stained the floor.

“Oh my God, we could never imagine going through something like this at this old age,” Maksymenko said. (AP)