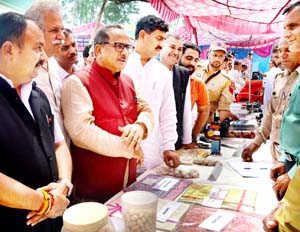 JAMMU, Apr  9: Deputy Chief Minister Dr Nirmal Singh today said the initiatives undertaken by the Prime Minister would ensure that the farming sector gets a fillip and the income of the farmers gets doubled by 2022.
The Deputy Chief Minister was speaking after inaugurating   Kissan Mela at Khour organized by the J&K State Advisory Board for Development of Kissans.
Among others, Vice-Chairman, J&K State Advisory Board for Development of Kissan Daljit Singh Chib, Member Parliament, Jugal Kishore, MLA Dr Krishan Lal Bhagat, MLC Vikram Randhawa, officers of various departments and large number of farmers attended the Mela.
Deputy Chief Minister said that aim of organizing such melas was to sensitize the farming community about new technology interventions and High Yielding Variety (HYV) of seeds being introduced in the agriculture sector to increase productivity and to provide better marketing facilities to the farmers. He asked the authorities of Agriculture Department to organize more such melas to create awareness among the farmers about the schemes launched for their benefits and to provide facilities to the farmers in future in every nook and corner of the State.
Calling upon the farmers for using new technological interventions and High Yielding Varieties (HYV) of seeds, the Deputy Chief Minister said that it would go a long way in effective implementation of schemes at ground, besides increasing the productivity which would help in improving their socio-economic profile.  He also asked them to insure their crops and take the benefits of Prime Minister Fasal Bima Yojana(PMFBY), a historical initiative announced by the Prime Minister, which would ensure that that they get the necessary compensation in view of any eventuality of failing of crops or drought.
Speaking on the occasion Jugal Kishore Sharma, said that such melas should be organized in more numbers at Panchayat for creating awareness among the farming community about the schemes and initiatives being undertaken by the Government for their welfare.
Daljit Singh Chib, Vice Chairman, J&K State Advisory Board said that the Government is committed to help farmers to improve their socio-economic condition.
Dr Krishan Lal MLA asked the farmers to move towards diversified agriculture and highlighted the initiatives being undertaken by the Government for the farming community.
Earlier, the Deputy Chief Minister inspected the stalls set up by various departments and showed keen interest.
Meanwhile, the Deputy Chief Minister    announced Rs 20 lakh for up-gradation of civic facilities in Khour Municipal Committee.
Earlier, Dr. Singh inaugurated Electric Distribution System for stabilization of power supply for Jourian town established at a cost of Rs. 31.57 lakh by the Power Development Department.