THE HAGUE, Sept 11: The Dutch Government faced a storm of protest from lawmakers Monday after a news report said it supported a Syrian opposition group which Dutch prosecutors had labelled a “terrorist” organisation.
Parliamentarians demanded answers after the report aired by the national public broadcaster said the Netherlands gave “non-lethal assistance” (NLA) to 22 armed opposition groups battling President Bashar al-Assad’s forces.
The television programme, which worked together with the respected Christian-based Trouw newspaper, identified one group as Jabhat al-Shamiya, which it said had been supplied with pick-up trucks, uniforms and other equipment last year.
But at the same time, Dutch prosecutors in the port city of Rotterdam were prosecuting a suspected jihadist for belonging to the Jabhat al-Shamiya group, which they labelled in court papers as a “salafist and jihadist movement striving for a caliphate.”
It was nothing more than a “criminal organisation with a terrorist aim,” the prosecutors added in the court papers.
Monday’s revelations come days after Dutch Foreign Minister Stef Blok’s announcement that the government was cutting all support to “moderate” opposition groups in Syria which has been ravaged by seven years of civil war.
“Resulting from the regime’s reclamation of large parts of Syria and the shrinking space for moderate opposition, cabinet has decided… To stop the NLA programme,” Blok said in a letter sent to parliament on Friday.
But politicians, both from the opposition and from parties in Dutch Prime Minister Mark Rutte’s ruling coalition, said they demanded clarity.
“This (news report) screams for an answer,” Christian Democrat party MP Pieter Omtzigt told AFP late Monday.
Sjoerd Sjoerdsma, MP for the progressive D66 party called it a “shocking report.” “How did this happen, despite all the warnings by lawmakers?” he was quoted as saying by the ANP national news service. (AGENCIES) 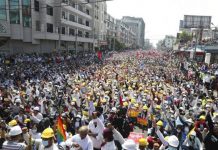