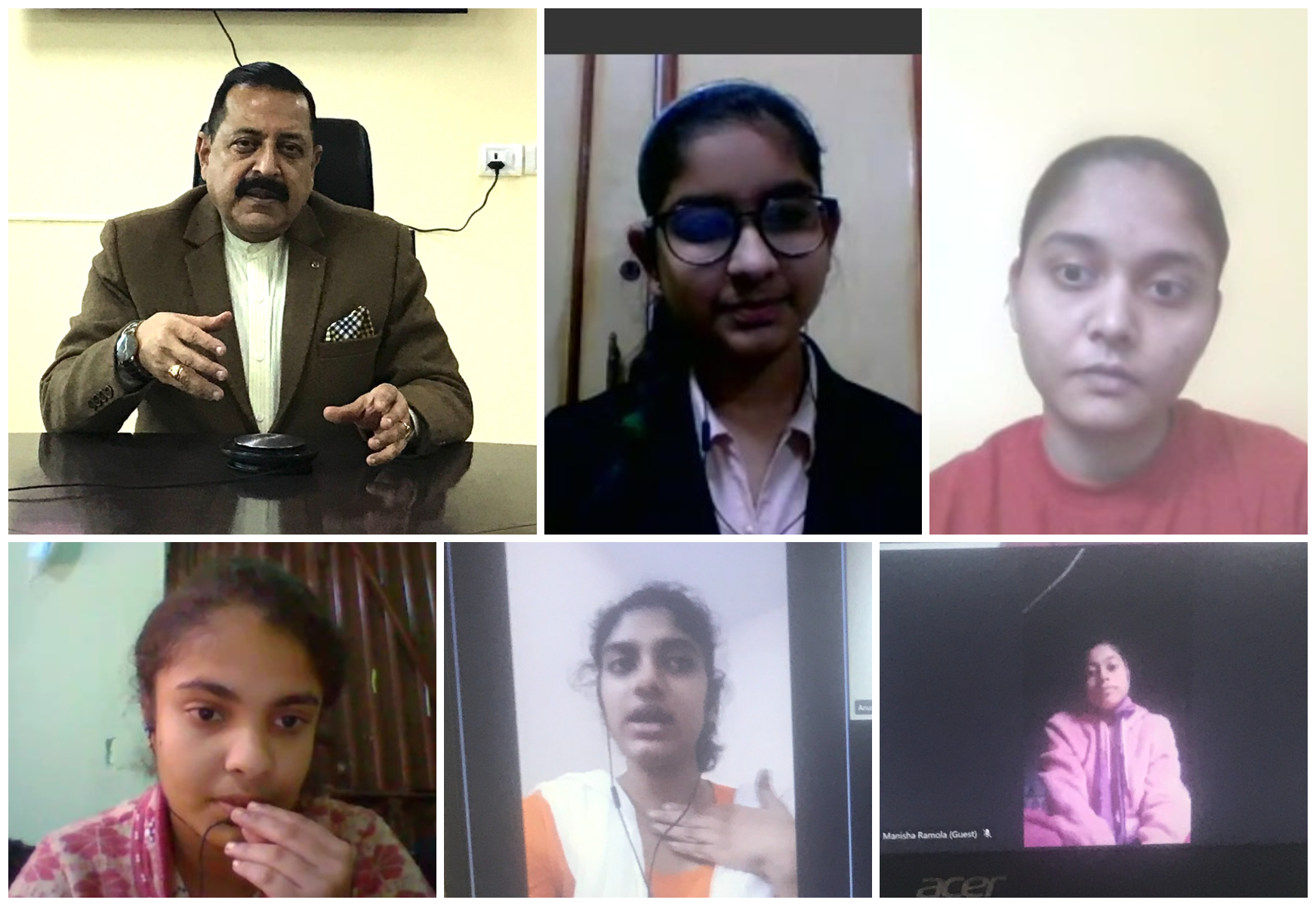 NEW DELHI, Jan 24 : On the occasion of National Girl Child Day, today, Union Minister of State (Independent Charge) Science & Technology; Minister of State (Independent Charge) Earth Sciences; MoS PMO, Personnel, Public Grievances, Pensions, Atomic Energy and Space, Dr Jitendra Singh interacted with girl achievers and StartUps,from across the country, who have excelled in the areas of Science, Technology and Innovation. He stressed upon sustainable StartUps with viable livelihood linkage and new vocational opportunities.
Dr Jitendra Singh said, several government schemes are instilling confidence among children to think innovatively, look for out of the box solutions for different problems and also to break the barriers of the past to undertake unconventional initiatives.
Referring to Prime Minister Narendra Modi’s exhortation that “Innovation is the key to realising the dream of new India,” Dr Jitendra Singh reiterated all government support and help to young achievers and said empowerment of girls will lead to a better tomorrow.
During the online interaction, Digantika Bose, 1st year BSc student from Bengaluru, revealed that she had developed a Virus Destroying Mask which was preventive against Corona also and the project was shared with the Department of Science & Technology. She sought the Minister’s help to market the same, to which the Minister promised her to help undertake an evidence-based trial for the same before marketing.
Manisha Ramola, 1st year BSc student from Uttarakhand had developed an Al-based solution designed to provide in-depth information on medicinal leaves and herbs with just a single image. The Minister complimented her for coming up with an innovation that combined ancient herbal medicine knowledge of the Himalayas with the futuristic concept of Artificial Intelligence.
Nishi Goswami from Panna, Madhya Pradesh demonstrated to the Minister an Al-based Chatbot that provides consultation services like a doctor and answers health or medical queries to a user. Dr Jitendra Singh brought to her notice that she had developed an AI based interface between the patient and Doctor. The same could be extended and linked with Tele Medicine.
Vinisha Umashankar from Thiruvannamalai, Tamil Nadu presented her solar ironing cart, while Manya Joshi, Class 12 student from Delhi initiated a forecasting project for natural disasters.
Anushka Shrivastava, Class 12 student from Bhopal, came up with an eco-friendly water bottle.
After giving a patient hearing to all the Girl Achievers, Dr Jitendra Singh said that the Ministry of Science and Technology and the Ministry of Earth Sciences will take all steps for fruition of innovative ideas and asked them to fully associate themselves to take all help and support. The Minister noted with appreciation that young daughters of India are taking a lead in Scientific Innovations.
Dr Jitendra Singh said, the Ministry of Science and Technology has taken several steps to popularise science stream at higher secondary level among girl students. Referring to the DST’s new programme ‘Vigyan Jyoti’ in the year 2019-20 to encourage meritorious girl students of Class 9-12 to pursue education and career in science and technology particularly in the areas where women are under-represented, he said, at present, the programme is implemented in 100 Districts of the country.
Similarly, the Minister pointed out that the MANAK (Million Minds Augmenting National Aspirations and Knowledge) Awards Programme under the Innovation in Science Pursuit for Inspired Research’ (INSPIRE) scheme, a flagship programme of DST targets to generate one million original ideas/innovations rooted in science and societal applications to foster a culture of creativity and innovative thinking among school children specially between Class 6 to 10. He informed that in the year 2020-2021, it brought 6.53 lakh ideas from more than 2 lakh middle and high schools across the country and the best of them were shortlisted and showcased at district, state and then at the National Level Exhibition & Project Competition.
Dr Jitendra Singh highlighted that the alumni from the Women Scientist Scheme-C (KIRAN IPR) scheme contribute to 10% of active patent agents in the country. He said, DST is actively engaged in creating an enabling environment for women in the science and technology domain with ‘Wos C scheme creating a significant impact on the IPR ecosystem in India.