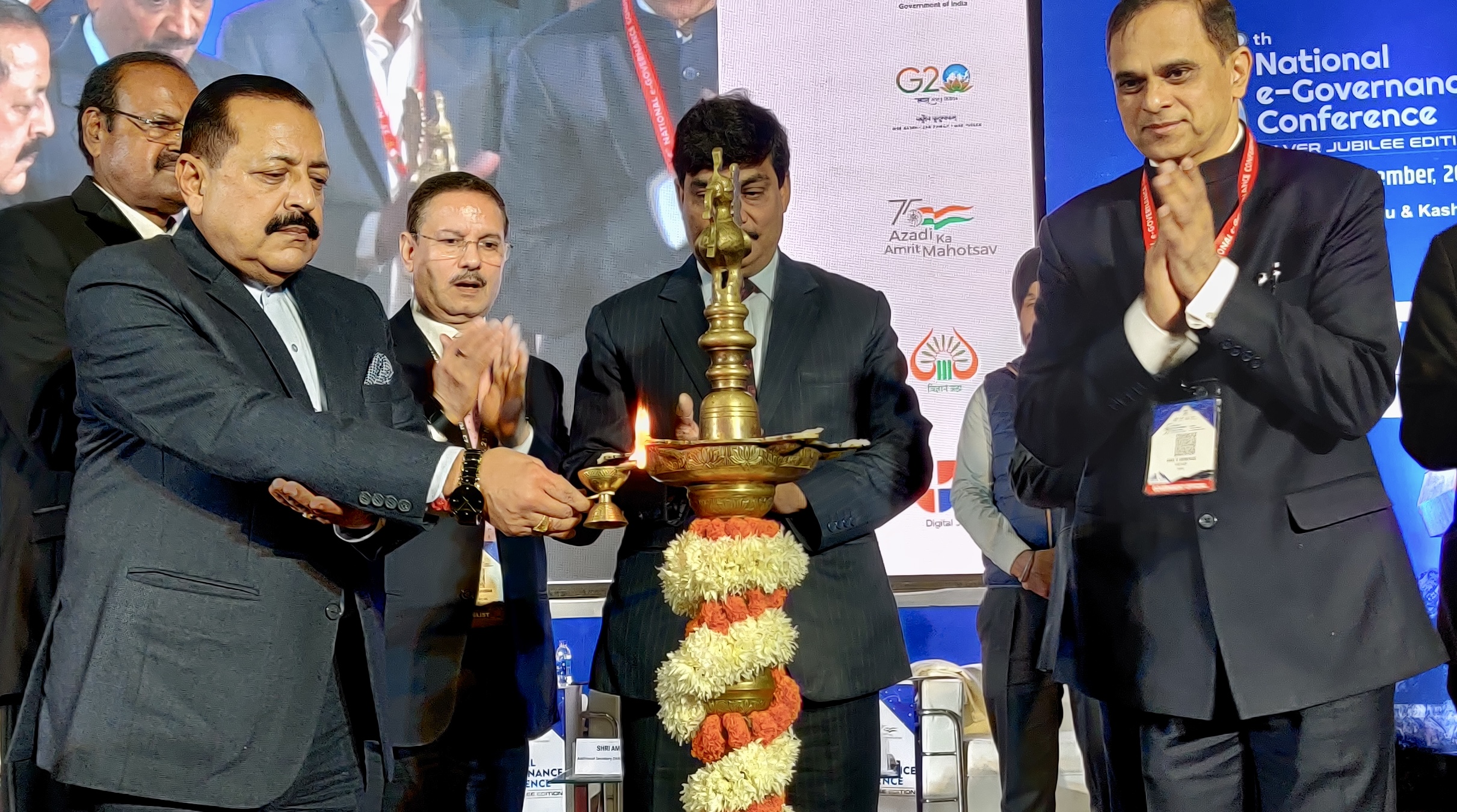 JAMMU, November 26 : Union Minister of State (Independent Charge) Science & Technology; Minister of State (Independent Charge) Earth Sciences; MoS PMO, Personnel, Public Grievances, Pensions, Atomic Energy and Space, Dr Jitendra Singh said, under PM Narendra Modi, a new governance model has sought to be introduced in India based on the Mantra of “Maximum governance, Minimum government” aiming at technology driven citizen-centric ease of governance for ease of living.
Inaugurating the 25th National Conference on e-Governance (NCeG), the silver jubilee edition of the NCeG in Katra, Jammu & Kashmir, Dr Jitendra Singh said, the ultimate objective of good governance is to bring ease of living in the life of common man. He said, Modi Government has preempted the need of Information Technology and inculcated the same in each and every aspect of governance and has committed to augment inclusive growth across all sectors.
The Department of Administrative Reforms & Public Grievances (DARPG) and Ministry of Electronics & Information Technology (MeitY), Government of India, in association with the State Government of Jammu & Kashmir is organizing the 25th National Conference on e-Governance (NCeG) on 26th – 27th November, 2022 in Katra, Jammu & Kashmir. The theme of this Conference is “Bringing Citizens, Industry and Government closer”.
Dwelling on the theme of the conference “Bringing Citizens, Industry and Government closer”, Dr Jitendra Singh said, this has become an absolute necessity in the times we live in, as the days of working in Silos is over. He said, closer synergy among the Research, Academia, Industry and Start-ups is the way forward for India to become self-reliant (Atmanirbhar) in true sense of the term. The Minister added that in an era of increasing digitization with Web 3.0, Artificial Intelligence and regular Tech Disruptions, Prime Minister Modi’s vision of India’s Techade can be realized through vigorous and all pervasive Digital push.
The Minister said, Digital innovation will play an important part in the next decade for governance to transform India into a digitally empowered society and knowledge economy. He said, this will necessitate conversations around topics and technologies which would shape Digital Governance in the future to enhance the delivery of Government services to citizens. He said, Vision India@2047 would be e-Vision India @2047.
Dr Jitendra Singh said, what is worth noting is that all such large public digital solutions are built with an open architecture, and are modular with plug and play that essentially seek to democratize and decentralize technology usage. He said, India has been building ‘open digital platforms’, which are tremendous force multipliers and underlined that this is critical and unique in being affordable, interoperable, API-driven (and hence scalable), mobile-first in vernacular languages, and allows India’s entrepreneurs to build on the rails of these platforms to innovate and solve problems at scale and for trust. These are not only digital transformations, but also innovations in the design philosophy of citizen-centric solutions with huge socio-economic implications, the Minister added.
Dr Jitendra Singh urged all the participants & stalwarts taking part in two-day intense deliberations to focus on questions that will propel India to the next decade of agile growth. He said, while discussing Digital Governance across Whole-of-the-Government, do ponder upon what it will take for making Government more accessible to every citizen of India, how do we build a more Transparent and Real-Time Grievance Management System with state-of-the-art technology and best practices in grievance redress learning from the world and some of our own corporates, how do we leverage technology for strengthening the Start-up Ecosystem, generate more employment and promote the ease of doing business.
Dr Jitendra Singh said, the “Whole of Government, Whole of Nation and Whole of Society” approach has become the new norm to achieve the desired results in the shortest span of time. He gave the examples of success stories of 75-day long “Swacch Sagar, Surakshit Sagar” campaign from 5th July to 17th September, 2022 and the ongoing nationwide campaign of Department of Pension of the Ministry of Personnel. PG and Pensions for creation of Digital Life Certificates. The Minister pointed out that due to this whole and integrated approach, 25 lakh Digital Life Certificates (DLCs) for Central Government pensioners were created in just 20 days from 1st to 19th November, 2022. Apart from officials of DoPPW, SBI & Punjab National Bank, registered Central Government Pensioner Associations, the representatives of Indian Post & Payment Bank (IPPB), Unique Identification Authority of India (UIDAI), National Informatics Centre (NIC) as well as Controller General of Defence Accounts (CGDA) in every city took part in the campaign.
Dr Jitendra Singh concluded that increased efficiency, increased transparency, robust focus on citizen-centricity and reaching out to the last man in the last queue for service delivery in the true spirit of Antyodaya is the ultimate objective of all governance reforms. He said, in the next 25 years of Amrit Kaal, the officers in their 20s and 30s have to play a stellar role to steer India to become the Unique and Best Model of Governance in 2047, when we celebrate the 100th Year of India’s Independence.
Expressing happiness that NCeG is coinciding with the Constitution Day celebrations, Dr. Jitendra Singh administered reading of the Preamble to the Constitution with all participants in the Inaugural Session, as 26th November is celebrated as the Constitution Day to commemorate the adoption of the Constitution of India in 1949.
Dr Jitendra Singh presented the National Awards for e-Governance (NAeG) under 5 categories of the NAeG Scheme – 2022 to 18 e-Governance initiatives at Central, State and District levels, Academic & Research Institutions and Public Sector Undertaking. This includes 9 Gold and 9 Silver Awards.
Secretary, DARPG, Shri V. Srinivas, Chief Secretary, J&K Shri Arun Mehta, Additional Secretary, DARPG, Shri Amar Nath, Joint Secretaries, DARPG, NBS Rajput and Jaya Dubey and several senior officials of other departments and retired bureaucrats took part in the inaugural.