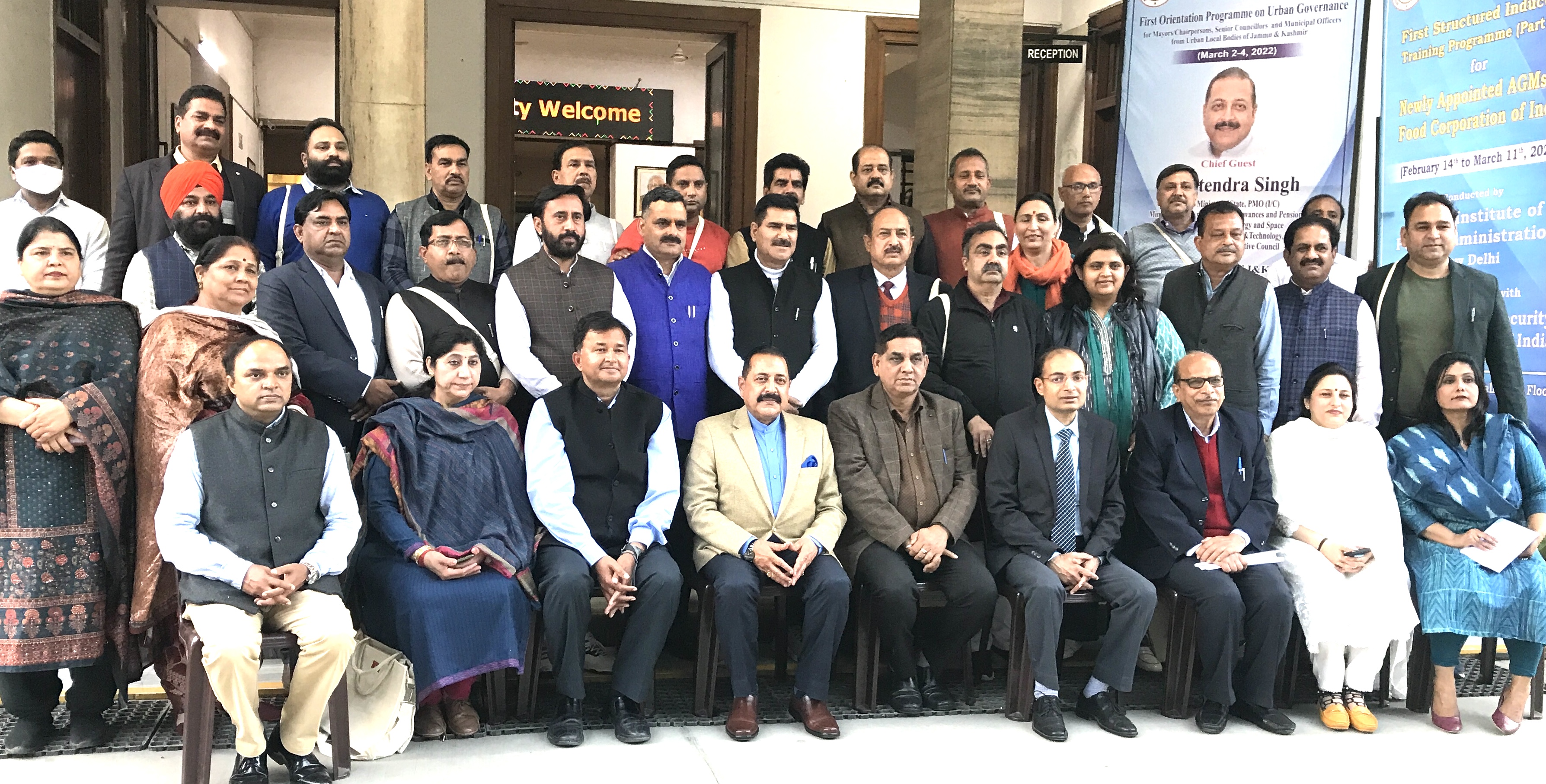 NEW DELHI, March 2 : Union Minister of State (Independent Charge) Science & Technology; Minister of State (Independent Charge) Earth Sciences; MoS PMO, Personnel, Public Grievances, Pensions, Atomic Energy and Space, Dr Jitendra Singh today inaugurated the first of its kind, exclusive 3-day “Orientation Programme” cum Workshop on Urban Governance, for Mayors/ Chairpersons and Municipal Commissioners/Chief Executives Officers from Urban Local Bodies of Jammu & Kashmir.
The programme is being organised by Indian Institute of Public Administration (IIPA), of which Dr Jitendra Singh is the National Chairman. Director General IIPA, S.N. Tripathi is coordinating the programme, which is being attended by Mayor Jammu, Chandra Mohan Gupta, Deputy Mayor Purnima Sharma along with other Corporators and Councillors from different Municipal bodies.
Speaking on the occasion, Dr Jitendra Singh said, for the first time, this year’s union budget talks about urban planning and development in a 25 year perspective when 50% of India will be living in urban areas. He said, Union Budget of 2022-23 allocated the highest ever grant of Rs 76,549.46 crore and announced several measures including setting up a high-level committee of planners, economists, and institutions to steer a paradigm change in the approach towards urban sector policies, planning, implementation, capacity building, and governance.
The Minister said, by the time India turns 100 in 2047, about half the population of the country is likely to live in urban areas. That is the reason, he said, the NDA Government under Prime Minister Narendra Modi has given special emphasis on the urban sector in the last 8 years to ensure economic development of all the states.
Dr Jitendra Singh said, since 2014 many special urban missions have launched which include SBM (Swachh Bharat Mission), PMAY (Pradhan Mantri Awas Yojana), AMRUT (Atal Mission for Rejuvenation and Urban Transformation), SCM (Smart Cities Mission), NULM (National Urban Livelihood Mission) to ensure that the transition to urban majority society is inclusive, sustainable, environment friendly and productive.
Dr Jitendra Singh said in India, the states with the above average level of urbanisation have much higher per capita income than states with low level of urbanisation like Bihar, Chhattisgarh, Jharkhand, Madhya Pradesh, Odisha etc. The states from Gujarat up to Tamil Nadu have either achieved 50% mark (Tamil Nadu) or are closer to the urban majority, he added.
Referring to Orientation Programme on Urban Governancefor municipal leaders from Jammu and Kashmir, Dr JitendraSingh said, the organisation of this course in the 75th years of Independence has special significance as India is undergoing a transition from semi-urban (25% plus) to urban majority society by next 25 years. He said, it is a symbol of economic growth as urbanisation is linked with expansion of manufacturing and services.
The Minister pointed out that like the country as a whole, Jammu and Kashmir is also undergoing a changeover from 27% urban population in 2011 to half way mark in coming decades. He, however added that this journey poses a challenge to carry out urban sector reforms effectively as initiated by our urban missions. He said, the role of Jammu which is one of the oldest municipalities, created in 1930, and is the gateway of state is crucial to expedite economic development in the state.
Dr Jitendra Singh said that in the overall context, he is happy to note that the municipal corporation of Jammu which was created in 2000 has taken appreciable steps in the last few years, which include online payment gateway and approval procedure, checking illegal construction, banners hoardings and efficient grievance redressal. He, however, added that there are several innovations and best practices in other parts of the country which need suitable exposure for the city of Jammu and in this connection, the role of elected leaders in the city government becomes decisive.
Dr Jitendra Singh referred to multiple roles of elected leaders like developing a bottom-up connectivity in city governance,promoting emergence of natural leadership from the grass-root level, community participation and mobilisation of local resources, and operating as intermediary link between city government and community, and state leadership and city. He said, water, sanitation, mobility and housing are key areas of our attention.
Dr Jitendra Singh said, besides the Jal Jeevan Mission with a focus on Har Ghar Nal se Jal, the country has already achieved ODF (Open Defecation Free) status for all the urban areas. He said, Smart Cities Mission is providing infrastructure and governance, PMAY is focusing on affordable housing, while PMSVANidhi is providing working capital loan to street vendors. All these schemes need suitable implementation in Jammu, the Minister emphasised.
In his concluding remarks, Dr Jitendra Singh said, the three-day programme of IIPA covers a pointed exposure on government of India missions and case studies from different parts of the country and added that these lessons will certainly give some take home points for adaptation in Jammu. He said, the urban reforms in Jammu are not only important for the city but are also important for other towns in the state. The Minister expressed hope that this three day conclave on urban governance will provide live cases and agenda for each of our elected representatives and will add to our efforts to make Jammu a clean, green and productive city.