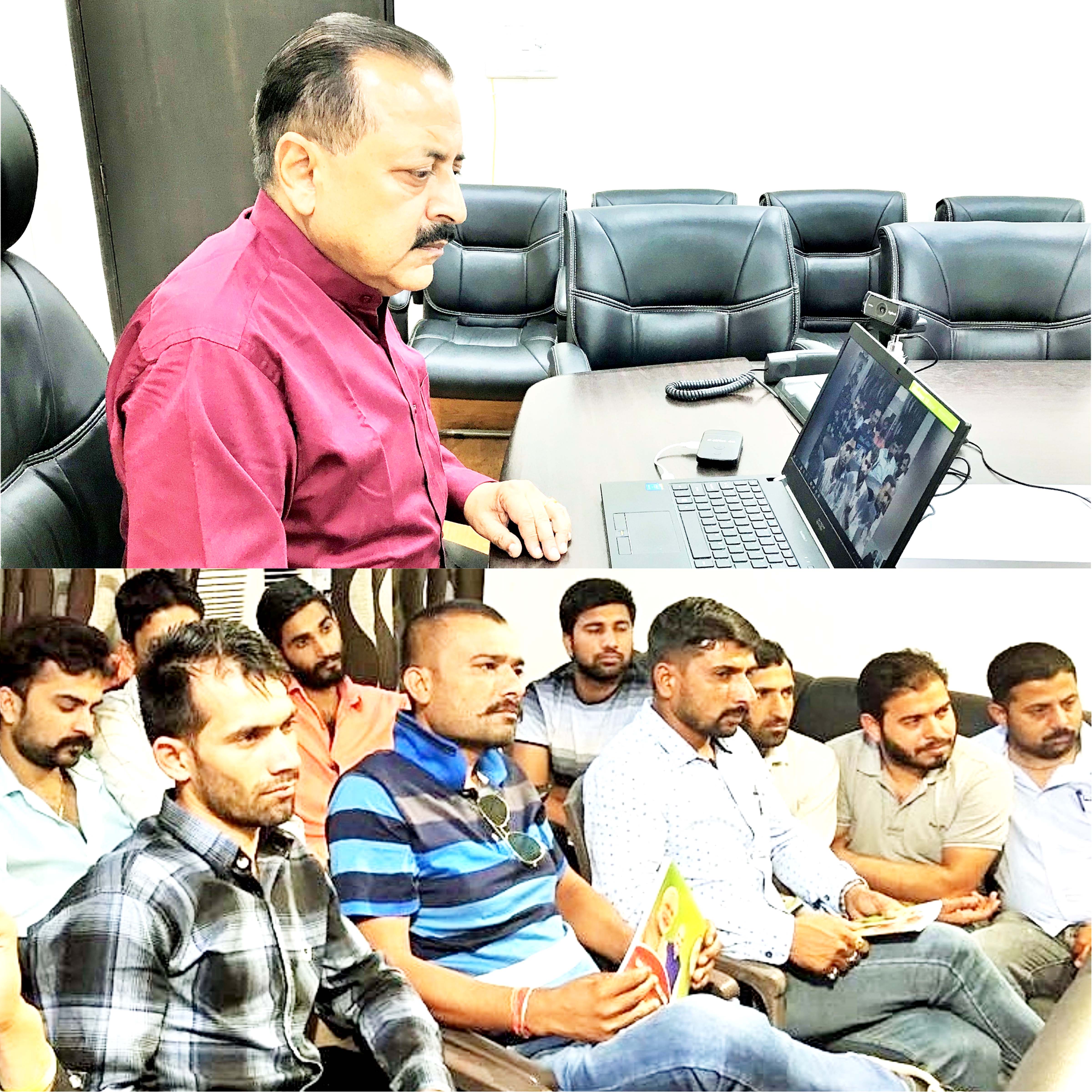 Excelsior Correspondent
NEW  DELHI, June 17: Making a new beginning in high-tech mass contact programme, Union Minister and Lok Sabha Member of Parliament from Udhampur-Kathua-Doda constituency, Dr Jitendra Singh today held a video conference interaction with a group of youth from his constituency.
While Dr Singh sat in his Delhi office, a group of youth, including BJP Karyakartas drawn mostly from Ramnagar Assembly segment in district Udhampur, held a real-time interaction with him from his Jammu office at 13A Gandhi Nagar. The office sources said that after the success of this maiden experiment, the future interactions will be held with the party Karyakartas and residents of constituency, directly from their respective town/cities like, Kathua, Udhampur, Doda, Ramban, Bhaderwah etc.
While addressing the video meeting, Dr Singh said, during the last four years, he has strictly followed a roster, wherein he spends two to three days every week in one or the other Assembly segment of his Parliamentary constituency inspite of his tight schedule in the national capital, but since the constituency is very large and far-flung, it may not be possible to reach every remote area every time. The new technique being tried today, he said, will enable him to remain connected with the party Karyakartas and others in the constituency for the entire week even on the days when he is physically not with them.
In today’s age, Dr Singh said, where connectivity is gradually becoming more and more real-time based, it is one step forward that we have also chosen to move in this direction. He said, a day may come when, in future, the election campaigns may begin to depend less and less on big outdoor rallies and, more and more on high – tech direct public interaction.
In a lucid interaction, one after the other, the participants expressed themselves to Dr Jitendra Singh and also sought his response for a wide range of issues related to organisational matters as well as the ongoing development works in their area.  For instance, one of the participants pointed out to the slow pace of the execution of work by the State Government on the construction of a bridge for which the approval had been obtained with the effort of the MP.
Another participant brought to the notice of Dr Singh that, in violation of the existing guidelines, some of the sign plates displaying the work done from MP fund (MPLAD) did not clearly mention the name of the MP. They also complained of lack of interaction between them and the local administration. Dr Jitendra Singh responded by saying that within the next few days, he would arrange a direct meeting between them and Deputy Commissi-oner, where all these issues can be taken up. Bharat Sharma, National Executive Member of BJYM coordinated the programme.