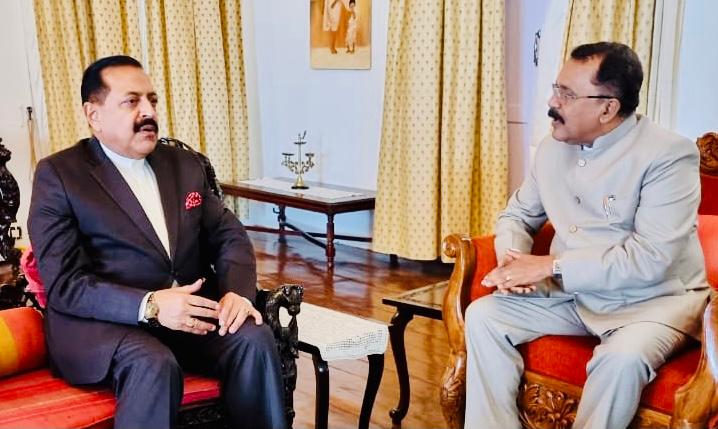 GOA, Dec 10: Union Minister of State (Independent Charge) Science & Technology; Minister of State (Independent Charge) Earth Sciences; MoS PMO, Personnel, Public Grievances, Pensions, Atomic Energy and Space, Dr Jitendra Singh, who arrived here late this evening, called on Governor of Goa, P.S. Sreedharan Pillai and later held a meeting with senior scientists wherein he discussed ways to speed up exploration of ocean minerals from coastal and sea-bed sources, including those along the Goa coast. He said , marine minerals are a key to India’s future economy.
The Minister said that India has emerged as one of the frontline nations in marine scientific research under Prime Minister Narendra Modi and now actively engaged in exploring the resourceful ocean bed for meeting the country’s future energy and metal demands. He said, the “Deep Ocean Mission” initiated by the Modi government heralds yet another horizon to various resources to enrich the “Blue Economy”.
Dr Jitendra Singh said that National Center for Polar and Ocean Research (NCPOR) at Goa has the mandate of exploration of gas hydrate occurrences within the Exclusive Economic Zones as well as Multi-metal hydrothermal mineralization in the Indian ridge area. He said, apart from this the National Institute of Oceanography (NIO) with its headquarters at Goa operates two research vessels RV Sindhu Sankalp (56 m) and RV Sindhu Sadhana (80 m) that are equipped for multidisciplinary oceanographic observations.
Dr Jitendra Singh , all the Science Ministries and Departments are now working on integrated theme-based projects instead of a particular Ministry based or Department based projects. He said, recently directives were issued for close coordination and collaboration between Institute of Minerals and Materials Technology (IMMT) at Bhubaneswar and NIOT (National Institute of Ocean Technology), Chennai for accelerated progress in developing India’s blue economy and harnessing its ocean resources. He said, efforts are on for the development of suitable technologies for effective mining of some of the deep-sea mineral resources and exploitation of gas hydrates resources and NCPOR can play a lead role in this.
Dr Jitendra Singh said, India’s blue economy is understood as a subset of the national economy comprising an entire ocean resources system and human-made economic infrastructure in marine, maritime, and onshore coastal zones within the country’s legal jurisdiction. He said, it aids the production of goods and services that have clear linkages with economic growth, environmental sustainability, and national security.