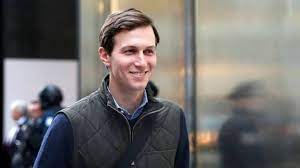 NEW YORK, July 26: Jared Kushner, the son-in-law of former US President Donald Trump, was diagnosed with thyroid cancer while he was serving as a senior adviser in the White House during his father-in-law’s presidency, according to a media report.
The New York Times in its report on Monday said that according to Kushner’s memoir ‘Breaking History: A White House Memoir’ set to be published next month, Kushner was treated for the cancer but kept his diagnosis a secret from most around him.
The NYT report said that Kushner’s thyroid cancer was detected in October 2019, “as he was involved in discussions over a trade deal with China.”
Kushner, 41, wrote in the memoir that the cancer was caught “early” but required removing a “substantial part of my thyroid”.
He was also warned that there could be “lingering damage” to his voice. “On the morning that I travelled to Texas to attend the opening of a Louis Vuitton factory, White House physician Sean Conley pulled me into the medical cabin on Air Force One,” Kushner wrote in the memoir.
Conley told Kushner that his test results came back and “It looks like you have cancer. We need to schedule a surgery right away.’”
Kushner requested Conley that he should not tell anyone about the diagnosis to “especially my wife or my father-in-law,” referring to his wife Ivanka Trump.
The NYT said in the report that Kushner’s “illness was one of the few pieces of information that did not leak out of one of the leakiest White Houses in modern memory.
Kushner wrote little in the book about why he did not make the information public, other than to say he worked to make sure a small circle was aware of it.”
Kushner wrote in the memoir that “this was a personal problem and not for public consumption.
With the exception of Ivanka, Avi, Cassidy and Mulvaney, I didn’t tell anyone at the White House — including the president,” he wrote, referring to his wife, his assistant Avrahm Avi Berkowitz, Trump aide Cassidy Hutchinson and Mick Mulvaney, the then-White House chief of staff.
Kushner writes in the memoir that he concentrated on work and tried “not to think about the upcoming surgery or the unwanted growth in my body. When I did think about it, I reminded myself that it was in the hands of God and the doctors, and that whatever happened was out of my control. At moments, I caught myself wondering whether I would need extensive treatment.”
While Kushner did not tell his father-in-law about his diagnosis, Trump found out anyway but appeared not to have shared it with anyone, the NYT report said.
“The day before the surgery, Trump called me into the Oval Office and motioned for his team to close the door. ‘Are you nervous about the surgery?’ he asked,” Kushner wrote in the book.
“How do you know about it?” Kushner asked, according to the NYT report. “I’m the president,” Trump replied, according to Kushner.
“I know everything. I understand that you want to keep these things quiet. I like to keep things like this to myself as well. You’ll be just fine. Don’t worry about anything with work. We have everything covered here.”
The NYT report added that some presidential experts note that since Kushner was not an elected official, he had no obligation to disclose the information about his diagnosis.
It quoted David Axelrod, the chief strategist in President Barack Obama’s White House, to say that “if it didn’t affect his performance, it was a personal matter and he had no obligation to disclose it. Unlike any business entanglements or investments that might pose conflicts of interest, this was a personal, medical matter.” (PTI)